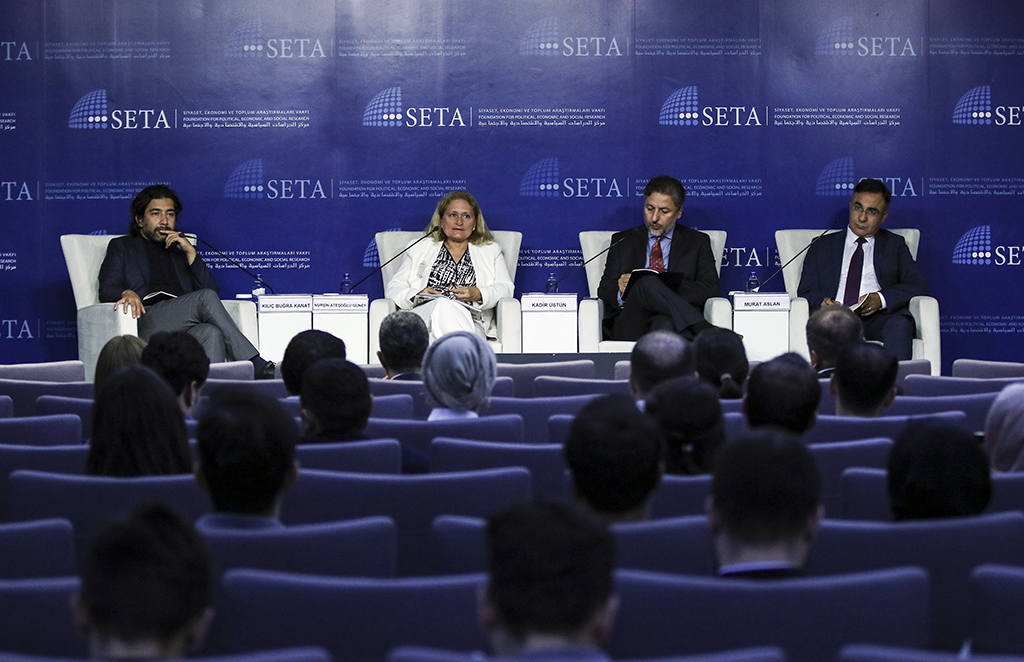 Military activity in Syria must be boosted by diplomacy

Experts have highlighted the importance of diplomatic initiatives to support Turkey’s military presence in northeastern Syria to establish a safe zone east of the Euphrates River.

“Turkey needs a serious diplomatic effort to support its military presence in Syria,” said Kadir Ustun, executive director of the Washington-based think-tank SETA Foundation, at a panel discussion Monday in the Turkish capital.

In response to a question by Anadolu Agency on the consequences of a possible unilateral intervention of Turkey east of the Euphrates River, Ustun said it is not possible for Turkey to target U.S. troops as the Turkish president stated.

Turkish President Recep Tayyip Erdogan said Sunday that Turkey would go on its own if the establishment of a safe zone east of the Euphrates in northern Syria does not start by the end of September.

Erdogan said Turkey and the U.S. are discussing a safe zone in northern Syria but with every step taken it is seen that what Turkey wants does not match with what is in the mind of the U.S.

While Turkey aims to completely eliminate the terrorist organization nesting in northern Syria, the U.S. counts on dealing with Turkey and the terrorists on the same ground, Erdogan said.

“It seems Turkey’s ally is after a safe zone in northern Syria not for Turkey but for the terrorist group. We reject such an approach,” he said.

U.S. troops are not entitled to protect YPG forces in case of possible military operation by Turkey, Ustun said.

However, Ustun expressed hope that such a situation would not be faced at this stage as the present state of relations between Turkey and U.S. President Donald Trump holds good momentum.

“The costs that Russia is creating in the region for Turkey also should not be ignored,” Ustun warned.

Ustun also stressed that possible unilateral action by Turkey in the region may create difficulties for Ankara in providing international legitimacy for its act in future scenarios.

“Neither the U.S. nor Russia are willing to ensure ‘serious’ coordination and to develop a common policy with Turkey in Syria,” he said.

Ustun warned that Turkey’s unilateral military step that disregards these two powers’ presence in the region will not only have a negative impact on Turkish-American relations, but it will weaken Turkey’s power in the field.

– Turkey not have luxury to remain passive

Murat Aslan, a researcher at SETA‘s security studies directorate and faculty member at Hasan Kalyoncu University in Gaziantep, said it is important to manage the consequences of a possible unilateral initiative of Turkey in northeastern Syria.

He underlined that Turkey is currently in a new process for the establishment of a safe zone east of the Euphrates and this process already gives a chance at diplomatic initiatives.

If this process fails, however, Turkey does not have the luxury to remain passive in the region, Aslan said.

The de-facto situation in Syria directly affects Turkey’s security in a negative way and the U.S. clearly supports this process against Turkey, he stressed.

Aslan added that unilateral initiatives can have economic consequences for Turkey, but Ankara has the capacity to respond to such sanctions.

“We have just started to see the military applications of this process in the field, but there are still doubts about their continuance,” Aslan said.

Turkey and the U.S. military personnel completed Sunday the first joint ground patrol for the establishment of a safe zone east of Euphrates in Syria.

The patrol was backed by unmanned air vehicles and helicopters.

On Aug. 7, Turkish and U.S. military officials agreed to set up a safe zone in northern Syria and develop a peace corridor to facilitate the movement of displaced Syrians who want to return home. They also agreed to establish a joint operations center.

The agreement also envisaged setting up necessary security measures to address Turkey’s security concerns, including clearing the zone of the terrorist YPG/PKK, a group the U.S. has sometimes been allied with, over Turkey’s objections.

The YPG is the Syrian offshoot of terror group PKK, which has been responsible for the deaths of nearly 40,000 people in Turkey, including many children, women and infants, for more than 30 years.

Monday’s panel discussion on Turkish-American relations was hosted by SETA, the Foundation for Political, Economic and Social Research.

Experts discuss Turkey-US safe zone deal
Next
Loading...
Loading...
We use cookies to ensure that we give you the best experience on our website. If you continue to use this site we will assume that you are happy with it.Ok