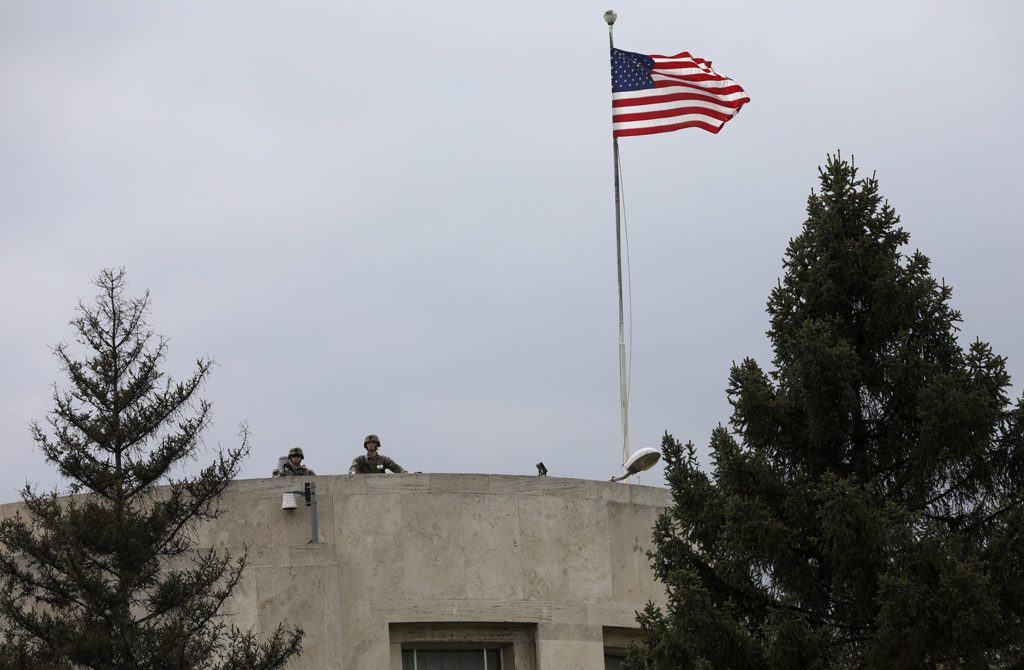 U.S. soldiers stand guard on the rooftop of the U.S. Embassy as Turks stage a protest nearby in Ankara, Turkey, April 26, 2021. (AP Photo)

Lessons from the envoy controversy in Turkey

Those 10 foreign ambassadors could serve their countries better if they stopped making such statements and instead promoted a new kind of relationship that recognizes Turkey’s interests and considerations.

Turkey has returned from the brink of a major crisis with Western governments. President Recep Tayyip Erdoğan doubled down in response to an Oct. 18 statement by 10 ambassadors that meddled in Turkey’s internal affairs and infringed on its right to sovereignty: “They will either understand Turkey or leave it.”

The relevant embassies formally reiterated their commitment to Article 41 of the Vienna Convention, thus taking a step back. That retreat was welcomed by the Turkish Presidency. The Turkish people overwhelmingly lashed back at that statement, which interfered in the country’s judicial system by calling on the courts to implement a ruling by the European Court of Human Rights (ECtHR) on Osman Kavala. Critics noted that those same governments did not react similarly to Greece over the court’s ruling on the freedom of assembly of ethnic Turks in Western Thrace.

The U.S. Embassy’s decision to take the lead, once again, and pledge its compliance with Article 41 was a welcome development for Turkey’s relations with the West and in light of Erdoğan’s upcoming meeting with U.S. President Joe Biden in Rome, Italy. Ahead of the 2023 elections, there are lessons to be learned regarding Turkey’s relations with the U.S. and Europe from the most recent crisis – so that similar escalations, which threaten to harm both sides, can be avoided.

Western governments who are unhappy with Turkey’s level of autonomy when it comes to defending its national interests must come to terms with the new realities here. To say the least, attempts to “discipline” Turkey through public statements are simply doomed to fail. Moreover, the Turkish people are determined to uphold their sovereignty and look out for their interests. Indeed, Turkey’s membership in certain alliances or international organizations does not give certain nations license to impose anything on Ankara. Especially keeping in mind the support that terrorist groups like the PKK-YPG and the Gülenist Terror Group (FETÖ) receive from those governments, Turkey cannot be expected to keep mum in the face of such impertinence.

At a time when great power competition intensifies, Turkey’s own democratic dynamics alone get to shape its domestic politics. Like other democracies, the country is off-limits when it comes to foreign meddling. Moreover, Ankara will be extremely vigilant against operational activities by certain Western governments in violation of Turkish sovereignty. The country will also react harshly to such attempts as needed.

After all, the coordinated statement by 10 foreign embassies, coupled with the Financial Action Task Force (FTAF) decision to “gray-list” Turkey and the U.S. appeals court ruling that Halkbank can be prosecuted, created the impression that the West has launched an anti-Turkey campaign. Needless to say, the current state of affairs threatens to bolster the opposition, which threatens bureaucrats, and its plan to “come to power with our friends.” The meddling of Western governments in party politics, where competition is already intense, unsettles the entire country. Indeed, that old-fashioned statement with a hint of “democracy promotion” – which the Republican People’s Party (CHP) deemed a “friendly” recommendation – caused a pitch on the Turkish street.

Unfortunately, there is a seemingly endless anti-Turkey campaign in the West. Some argue that it is better to wait than cooperate with Erdoğan’s Turkey. Ironically, those same folks were satisfied with Germany’s outgoing Chancellor Angela Merkel’s cooperation with Erdoğan regarding the refugee crisis or trade. They were also happy with the Biden administration’s cooperation with Turkey over the crisis in Afghanistan. Still, they demand that the West keep Turkey under constant pressure until Erdoğan is no longer in power.

That approach not only inflicts irreparable damage on Turkey’s relations with the West, but also misses the crucial point of the country’s transformation under Erdoğan over the last 20 years. The ongoing crises in Turkey’s neighborhood call for autonomy as well as an effective and active foreign policy. Ignore the opposition’s complaints over military operations abroad. What politician could actually give up on Turkey’s vested interests in Syria, Libya or the Eastern Mediterranean? Erdoğan’s brand of politics set new and high standards when it comes to consolidating Turkey’s national interests. Lowering that threshold would mean suicide for any politician.

To make a long story short, those 10 foreign ambassadors could serve their countries better if they stopped making such statements and instead promoted a new kind of relationship that recognizes Turkey’s interests and considerations.

What's the basis of Turkish reaction to 10 envoys?
Previous

YPG/PKK terror group aims to create chaos, disorder in Syria with car bomb attacks: Report
Next
Loading...
Loading...
We use cookies to ensure that we give you the best experience on our website. If you continue to use this site we will assume that you are happy with it.Ok