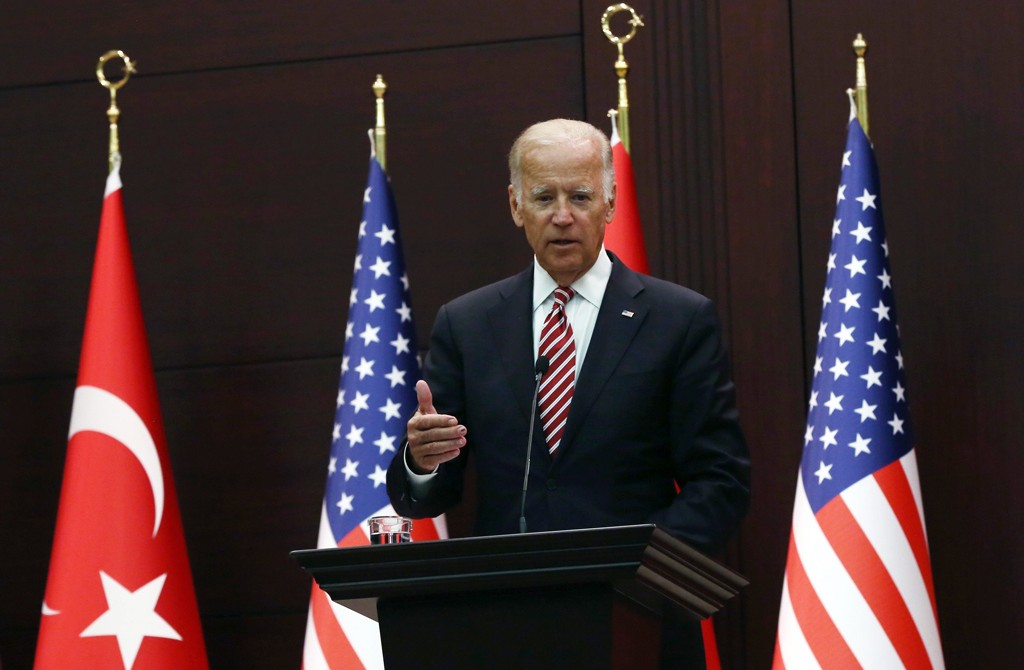 Democratic presidential nominee Joe Biden’s plan to remove Turkish President Recep Tayyip Erdoğan from power went down in the history of Turkish-U.S. relations. The fact that he made that statement some eight months ago does not make the situation any less grave. After all, those controversial words were not uttered by an inexperienced presidential candidate with no idea about foreign policy. Biden, who was President Barack Obama’s vice president, unveiled a thought-out and clear policy on Turkey.

Democratic presidential nominee Joe Biden’s plan to remove Turkish President Recep Tayyip Erdoğan from power went down in the history of Turkish-U.S. relations. The fact that he made that statement some eight months ago does not make the situation any less grave. After all, those controversial words were not uttered by an inexperienced presidential candidate with no idea about foreign policy. Biden, who was President Barack Obama’s vice president, unveiled a thought-out and clear policy on Turkey.

That statement of intent, however, revealed the nature of Washington’s activities against the Erdoğan administration between 2013 and 2016. From the Turkish people’s perspective, the U.S. establishment just assumed responsibility for everything that happened in Turkey during that period – including the July 15, 2016 coup attempt. At the same time, Biden made public his intended Turkey policy, if he wins the election, for 2020-2024.

In this sense, the former vice president shed light on the missing piece of the puzzle. His pledge to support opposition leaders in order to remove Erdoğan through elections, not a military coup, indeed reflected American vanity. Believing itself to be the very embodiment of “democratic values,” that spoiled superpower, armed with American exceptionalism, thus declared itself to be almighty. A more familiar version of the same cockiness manifested itself in the policy of “democracy promotion,” which was intended to topple authoritarian regimes that the U.S. did not favor. Both Republicans and Democrats implemented that policy, bringing death and destruction to many parts of the world, including Latin America and the Middle East. Meanwhile, Americans proved just how much they loved authoritarian regimes and coup plotters by backing Gen. Abdel-Fattah el-Sissi in Egypt and the crown princes of the Gulf states during the Arab Spring.

With regard to Turkey, however, the Obama administration, which included Biden, wrote a new chapter in the book of American interventionism by attempting to overthrow the democratically elected government of an allied nation.

Whatever happened between Erdoğan and Obama during the former’s May 2013 trip to Washington remains a mystery. Turkey, however, had to endure a period of turbulence, which began with the Gezi Park revolts and reached its climax around the July 15 coup attempt, following that meeting. The perpetrators intended to remove Erdoğan from power.

Back in 2013, the Western media hardly charged Turkey with “authoritarianism.” Washington’s attempt to topple the government of a democratic nation, as well as a NATO ally, ended up revealing America’s true face, as the Turkish people reacted strongly against the Obama administration for backing terrorist groups like the Gülenist Terror Group (FETÖ) and the YPG/PKK in Syria. Erdoğan, whose ouster, Washington thought, would have allowed the U.S. to rein in Turkey, overcame various challenges and stayed on his feet. The push to contain Turkey, however, remained in place, manifesting itself in the anti-Erdoğan narrative of authoritarianism. In retrospect, Donald Trump’s victory in the 2016 presidential election undermined that policy – which Biden, if elected, intends to adopt anew.

Interestingly, the Washington elite quite frequently asks “who lost Turkey,” but seem completely incapable of devising a Turkey policy that would work. Their gravest mistake is to dismiss that country’s status as a powerful player. Power would change hands in Turkey, they falsely assume, if the U.S. wanted it to. If Biden were to win in November, his remarks will forever cast doubt on Turkey’s opposition parties. When the main opposition Republican People’s Party (CHP) talks about “coming to power together with our friends,” people will remember Biden’s pledge. Voters will question whose lines opposition figures recite when they accuse the government of “fighting with the West.” Biden’s words, therefore, officially became the most cherished piece in the repertoire of anti-Americanism in Turkey.

The Democratic presidential contender’s remarks about working with U.S. allies in the region to isolate Turkey in the Eastern Mediterranean, in turn, amounted to a new existential threat. That Biden, who mulls over renewed dialogue with Iran, would alienate Turkey, a NATO ally, would only serve to undermine Western civilization and global order.

In his most recent Foreign Affairs article, Biden complained that America’s “credibility and influence … in the world” had diminished under the Trump administration. At this rate, Washington’s global role will become far smaller if the Democrat wins this year’s election. The Turkish people, in turn, will continue to strive toward Erdoğan’s ideal of a great and powerful Turkey.

COVID-19 has affected strategic relations radically
Next
Loading...
Loading...
We use cookies to ensure that we give you the best experience on our website. If you continue to use this site we will assume that you are happy with it.Ok