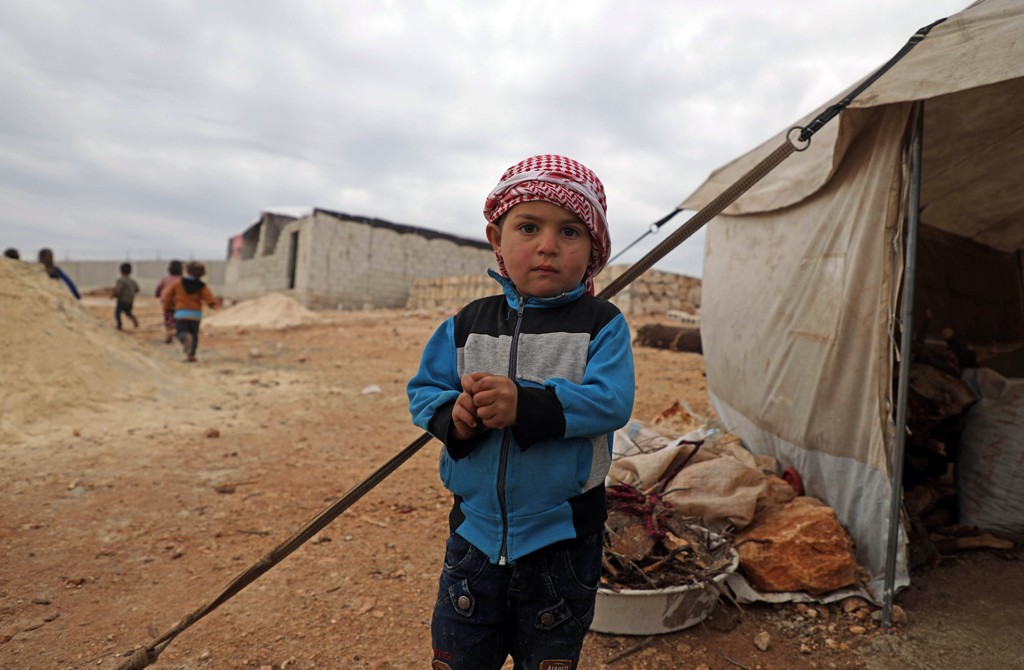 A displaced Syrian boy stands outside a tent at an informal camp in Kafr Lusin village on the border with Turkey in Syria's northwestern province of Idlib, Feb. 21, 2020. (AFP Photo)

Is there any hope for Idlib solution?

To solve the crisis in Idlib, the international community is hoping for the success of a four-nation summit and fresh diplomatic talks. President Recep Tayyip Erdoğan’s meeting with his Russian counterpart Vladimir Putin, Chancellor of Germany Angela Merkel and France's President Emmanuel Macron, scheduled to take place on March 5, keeps alive the hope of ending what the U.N. called “the worst humanitarian crisis of the 21st century” diplomatically.

To solve the crisis in Idlib, the international community is hoping for the success of a four-nation summit and fresh diplomatic talks. President Recep Tayyip Erdoğan’s meeting with his Russian counterpart Vladimir Putin, Chancellor of Germany Angela Merkel and France’s President Emmanuel Macron, scheduled to take place on March 5, keeps alive the hope of ending what the U.N. called “the worst humanitarian crisis of the 21st century” diplomatically.

Russian Foreign Minister Sergey Lavrov’s remarks on Moscow preparing for a new round of talks with Turkey signaled that the two countries are still working toward a cease-fire.

Here’s the million-dollar question: Will those diplomatic efforts be enough to stop the armed clashes in Syria?

Given Moscow’s maximalist demands and Europe’s overall irrelevance, it is hard to answer that question in the affirmative. Yet Russia and Turkey must find a middle ground, provided that their cooperation has served both sides’ interests in recent years, and it is key to protecting their long-term interests. Delays and a potential increase in military casualties will obviously make it harder for Ankara and Moscow to repair their relationship.

It would be irrational for the Kremlin to risk its long-term strategic ties with Ankara just to let Bashar Assad’s regime take over Idlib. Moscow may have embraced coercive diplomacy in order to implement the 2018 agreement and encourage Turkey to crack down on radical groups on the ground. Yet the influx of refugees from Idlib, whose current number stands at 1 million and could double soon, would put Turkey in a very difficult spot. To make matters worse, the Turks suffered more than anyone from the Syrian civil war’s spillover effects – including the YPG and Daesh terrorism, and the refugee crisis. Turkey’s relations with the U.S. also suffered severe blows due to the Syrian conflict.

So why would the Kremlin escalate tensions with Turkey over Idlib? The Russians possibly think that a regime victory in the opposition stronghold would mark the beginning of a new stage in the civil war. If the regime offensive succeeds, all eyes will turn to Syrian territories under U.S. and Turkish control. If Moscow wants to preserve Syria’s territorial integrity and restore peace and stability in that country, it has to work with Turkey. The Turks are key to Syria’s political transition process and reconstruction efforts. So the Russians need to stop undermining the trust in their relationship with Turkey.

Communications Director Fahrettin Altun’s call on the Kremlin was noteworthy: “Our patience has already run out, but we are confident in Russia’s cooperation. Still, we won’t stop looking for ways to uphold our national security.” One thing is clear: Russian steps to put Turkey’s national security at risk will take a toll on bilateral cooperation, and the element of trust will disappear if Moscow keeps ignoring such warnings. In that case, Ankara will reconsider its bilateral relations with Moscow in a new and permanent way.

The Kremlin would presumably wish to avoid such a scenario after having invested so much time and energy in nurturing the Turkey-Russia relationship. To reach a settlement before it’s too late, Putin needs to keep the Russian bureaucracy under control – as he has in the past. After all, tensions on the ground have reached a critical threshold and threaten to end all trust between Turkey and Russia. There is no room left for brinkmanship.

Here’s what Turkey simply cannot do: Ankara cannot stomach the Assad regime’s policy of removing Sunnis from Syria – just as it cannot accept the YPG/PKK’s terror corridor. Otherwise, the repatriation of nearly 7 million Syrian refugees will become impossible. Hence Turkey’s commitment to maintaining a presence in three terror-free areas and possibly a safe zone in Idlib.

It is hard to say how long Russia’s engagement in Syria will last. Yet, Turkey will certainly not leave the Syrian theater until there is a political process in place to facilitate the return of most refugees. It doesn’t matter who accuses the Turks of expansionism. Nor do the main opposition CHP’s call for dialogue with Bashar Assad and objections against the Idlib campaign matter. No matter who governs Turkey, facilitating the repatriation of refugees and the crackdown on the YPG/PKK will form the backbone of the country’s Syria policy. This is a red line for Turkey’s security and stability.

From Sochi to where? Rising uncertainties in Idlib
Previous