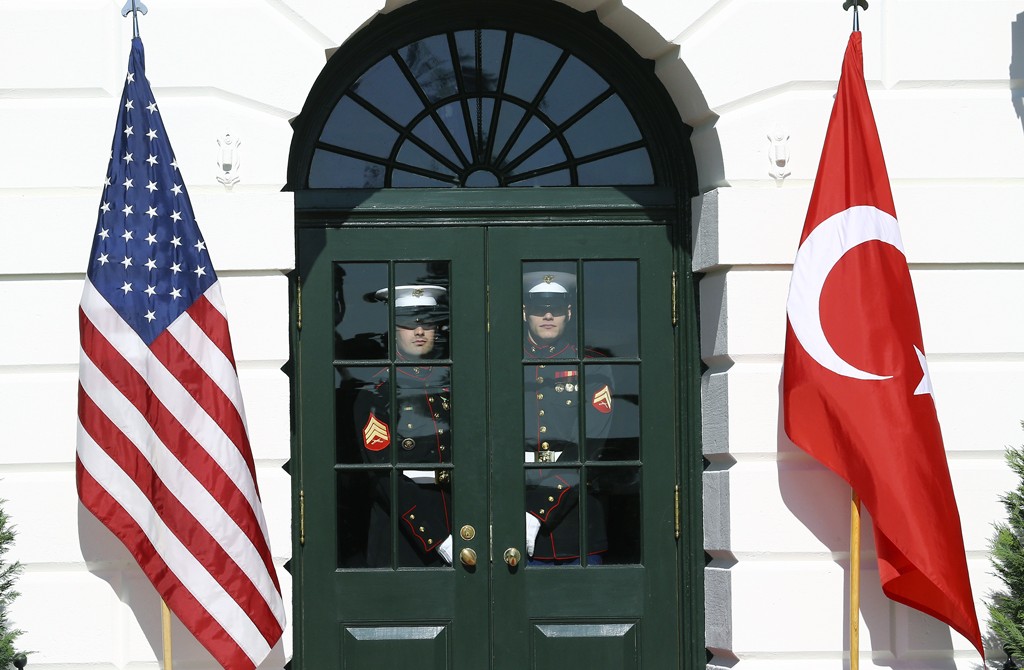 Honor guards arrive to take position in preparation of a welcoming ceremony for President of Turkey, Recep Tayyip Erdogan (not seen) by U.S. President Donald Trump (not sesen) prior to their meeting at the White House in Washington, United States on November 13, 2019.

Diplomacy never stops. Following a historic meeting between President Recep Tayyip Erdoğan and his American counterpart Donald Trump, all eyes are on next month’s NATO leaders meeting. Judging by the two presidents’ statements, critical developments in London are not foreseeable.

Having defended his decision to launch Operation Peace Spring from the White House, Erdoğan is now devoting his time and energy to a new campaign. The Turkish president’s current mission is to facilitate the resettlement of some 1 million Syrian refugees through the formation of a safe zone in northern Syria. He is now preparing to share the plans he proposed in discussions with Trump on Nov. 13 with fellow NATO heads of state.

Ahead of next month’s summit, the European media is also working hard to mount pressure on Turkey. Their agenda includes the repatriation of Daesh fighters, the Syrian National Army (SNA) and nuclear weapons at the Incirlik base. The daylight between those two campaigns speaks volumes about the current state of play.

The international community has not lifted a finger to help the hundreds of thousands of Syrians the Bashar Assad regime has been bombing for years. Even former U.S. President Barack Obama, presiding over a superpower, failed to enforce his own red line – the use of chemical weapons – in Syria. In contrast, there is no question that Turkey has borne the brunt of the Syrian civil war, fighting multiple terrorist groups, including Daesh and the People’s Protection Units (YPG), and admitting close to 4 million refugees.

Building on Turkey’s strong track record, Erdoğan continues to call on NATO leaders to manage their responsibilities. He criticizes countries with strong economies for shutting their doors to war victims and for trying to gain control of oil reserves in Syria: “Some people are fixated on [Syrian] oil. They also raised this issue with us. We do not care about oil – we care about saving those people. Whereas many nations do not hesitate to join forces with terrorist organizations for the sake of oil, we maintain a principled stance on this matter.” Erdoğan has also warned foreign governments that their double standards on refugees and counterterrorism could backfire: “Those who put on a show of liberty behind the walls they built around themselves will grasp what other people feel when their glass houses come crashing down on their heads.”

The Turkish president will not relent, even if Western leaders ignore his warning. In London, Erdoğan will ask those who do not think in terms of principles and values to look out for their own long-term interests.

Meanwhile, Western media outlets are busy spreading misinformation that claims Turkey has “invaded” Syria to “undermine” the YPG, which fought Daesh, and oversaw an “ethnic cleansing” campaign by the Syrian National Army. They conveniently refrain from reporting that the YPG released some 800 Daesh terrorists from prisons and that Turkey has killed over 4,000 Daesh fighters. This is because their biggest concern is the prospect of some 700 European Daesh militants returning home.

Europeans also refuse to pay for a safe zone for refugees – even if the United Nations were to oversee the effort. In an attempt to downplay Turkey’s legitimate request for financial assistance, the Western media is pushing a new anti-Turkish narrative. A retired U.S. general, Chuck F. Wald, is leading the charge against Turkey on the orders of the Pentagon’s inner circles, describing the NATO ally as “the world’s new nuclear menace.” In a recent interview, he called on Washington to relocate some 50 American B-61 nuclear bombs and the 39th Air Wing due to rising anti-Americanism in Turkey and Ankara’s rapprochement with Moscow. Ironically, it is the West’s “policy of no policy” in the Syrian theater that put Turkey in a tough spot and undermined NATO’s very essence.

These are the two campaigns underway and what their advocates hope to accomplish. You decide which one is more compatible with humanitarian values and the spirit of partnership.

Last nail in the coffin: US decision on illegal Israeli settlements
Previous

Turkey's perpetual 'headscarf' controversy
Next
Loading...
Loading...
We use cookies to ensure that we give you the best experience on our website. If you continue to use this site we will assume that you are happy with it.Ok