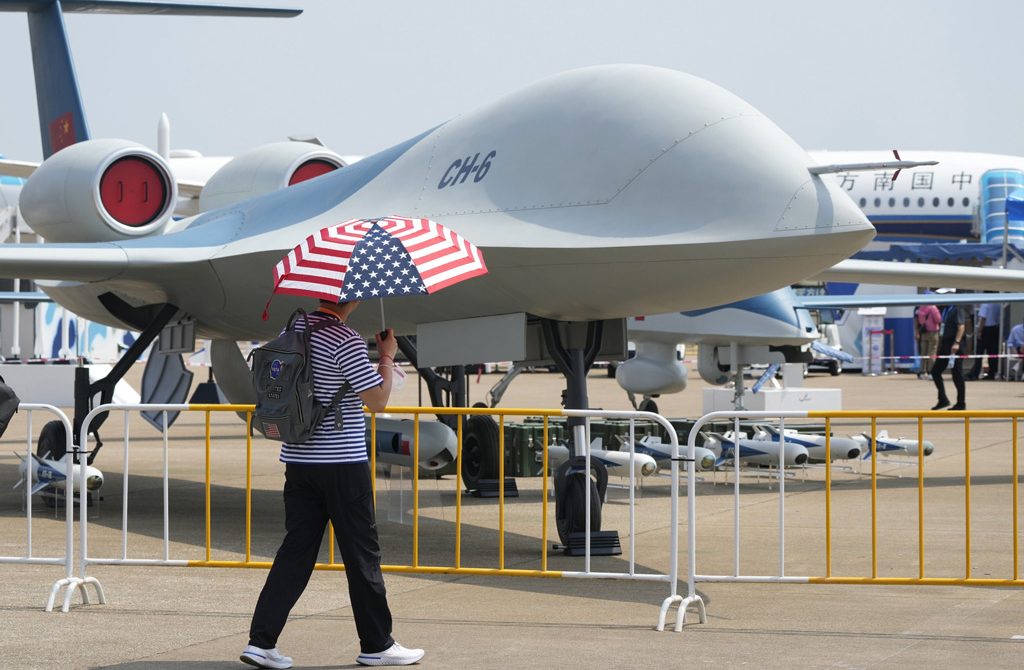 A man carrying an umbrella with the United States flag colors walks past the CH-6 drone during the 13th China International Aviation and Aerospace Exhibition, also known as Airshow China 2021, in Zhuhai in southern China's Guangdong province, Sept. 28, 2021. (AP Photo)

The U.S. is no longer on the throne as the world's sole superpower. Although the country tried to take measures against the strong rise of China, even U.S. allies have begun to establish close ties with China

Today’s world is in both a comprehensive transition and a deep crisis. Not only do rivalries and enmities abound but today’s alliances are also quite vulnerable. The survival, duration and sustainability of all these alliances, rivalries and conflicts are in question. In other words, neither conflicting nor cooperative relations are sustainable over the long term. All foreign policy activities are conducted on slippery ground. That is, the direction and pace of any relationship may change at any time.

Therefore, when we analyze the current global balance of power, we have to take these conditions into consideration. No global power pursues a principled foreign policy orientation. Most countries follow an eclectic, sectoral and compartmentalized foreign policy. In this piece, I want to briefly analyze the current foreign relations tendencies of certain global powers.

Even though the United States is the most powerful, influential and important international actor, it faces difficulties in maintaining its global leadership. As U.S. relations with other leading global powers are in flux, U.S. relations with its European allies are not sustainable. The U.S. is neither comfortable with the current pace of global relations, nor it is able to change the pace of these events to accommodate its national interests.

In this context, it is interesting to examine U.S. relations with other influential actors. The U.S. prioritizes its relations with China, the most powerful challenger state to American hegemony.

Successive U.S. governments have not determined what kind of policy to follow toward China. For instance, only several days after President Joe Biden declared that the time for “relentless diplomacy” has begun, the U.S. announced a new alliance with Australia and the United Kingdom (AUKUS). The U.S. promises carrots but generally uses the stick in its relations with China.

On the other hand, the steps taken by the U.S. in the Indo-Pacific region both directly and indirectly undermine its trans-Atlantic allegiances. It seems that its European/NATO allies will be of lesser importance for the U.S. for the foreseeable future. However, it will continue to cooperate with European countries against the perceived threat from Russia, still the main “other” of the NATO alliance.

Similarly, at a time when the U.S. president has declared that the U.S. is refocusing on international politics, the U.S. withdrew from Afghanistan and ended its 20-year invasion. The U.S. left the country to the Taliban regime, which it had overthrown 20 years ago. The U.S. continues to withdraw from certain crisis areas. Other global powers such as China and Russia began to fill the power vacuum created by the U.S. withdrawal.

The U.S. will eventually lose ground in international politics and it does not know how to reverse or even stop this damaging course. It continues to follow unilateral policies that simply otherize its allies causing them to lose their trust in the U.S. Its allies have been trying to diversify their relations by initiating a sectoral foreign policy understanding. Some of them have been trying to weigh in against the U.S. on certain issues.

With its cutting-edge technology, economic growth, military power and huge population, China is the second most influential global actor after the U.S. On the one hand, China positions itself against Western hegemony. For this reason, it spearheaded the establishment of the Shanghai Cooperation Organization, which is considered the new other of NATO. It has been preparing itself to introduce a new set of global rules in the near future.

On the other hand, China has been trying to establish economic institutions as an alternative to the United Nations’ specialized organizations such as the World Bank and International Monetary Fund. It is now ready to provide financial resources to other countries for different kinds of projects. It has hired or bought many seaports worldwide in order to solidify its position globally. It has begun to steal allies from the U.S. as well. Many countries that are close to the U.S., such as European countries and Israel, have begun to improve their relations with China. Many African and Middle Eastern countries consider China as one of their closest economic and political partners.

Therefore, it can easily be assumed that the Chinese challenge for global hegemony is in the making. The only reason why China has not claimed global hegemony is timing. In other words, according to the Chinese leadership, China is not yet ready for global hegemony. When China begins to involve itself in the political and economic affairs of other countries and steer them away from the U.S., a global confrontation will become inevitable. At that time, the U.S. is not sure how many countries will continue to remain on its side. Many European countries may remain indifferent to a possible confrontation between the U.S. and China in the Indo-Pacific region.

The position of some global powers such as India against Chinese global power is clear, while many others may remain neutral in case of increased confrontation. Although Russia seems closer to China and European countries seem closer to the U.S., their position may change over time. The position of many global and regional powers is not fixed. These states may swing between the two fronts.

The point I am trying to make is that today’s international relations are too complex to make clear-cut analyses. By following sectoral policies, every state pursues paradoxical relations toward one another. Therefore, while we have to take general tendencies into consideration, we have to focus on specific issue areas in order to infer from single cases.

Sochi meeting and 3 levels of Turkish-Russian relations
Next
Loading...
Loading...
We use cookies to ensure that we give you the best experience on our website. If you continue to use this site we will assume that you are happy with it.Ok