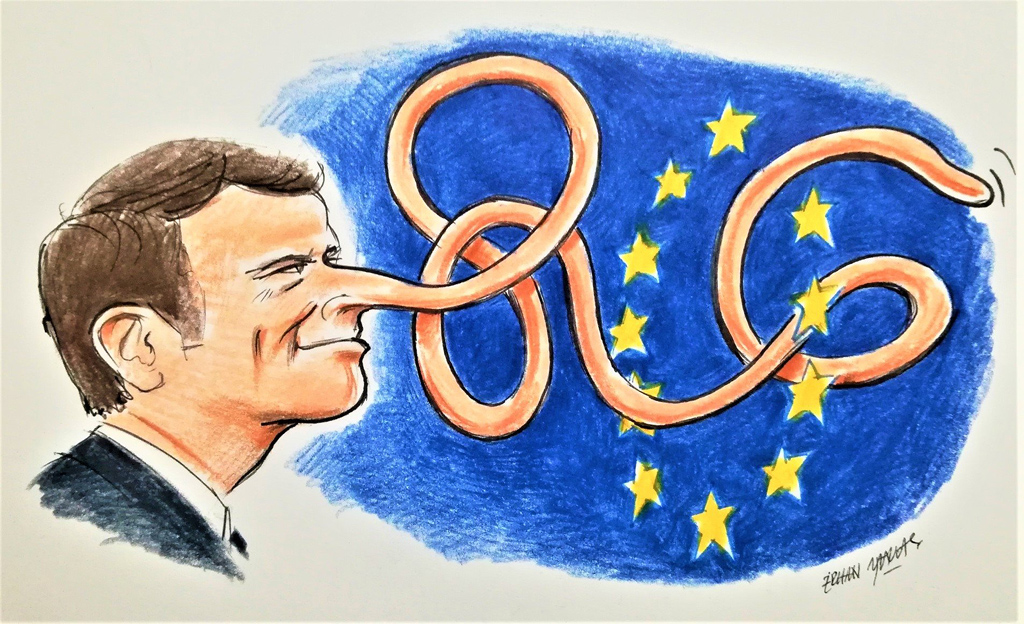 French President Emanuel Macron has been trying to bring back France's shiny past and become the dominant European power, bypassing Germany, the continent's main heavyweight. He is also claiming a central position in the Eastern Mediterranean as well as in Western Africa. However, he follows an unusual policy in order to achieve his objectives.

French President Emanuel Macron has been trying to bring back France’s shiny past and become the dominant European power, bypassing Germany, the continent’s main heavyweight. He is also claiming a central position in the Eastern Mediterranean as well as in Western Africa. However, he follows an unusual policy in order to achieve his objectives.

First of all, Macron initiated an authoritarian turn in French domestic politics. His government has introduced new laws that undermine the very basic rights of minorities, Muslims in particular, living in the country. A large part of French society is not happy with the new regulations and policies.

Second, he has been otherizing the Western allies, including other NATO members, of France and has even declared the “brain death” of NATO.

Thirdly, he has been trying to intervene in almost all political crises in surrounding regions to show his country’s effectiveness.

In this context, the French Senate recognized the Armenian-controlled Nagorno-Karabakh as an independent state, while even Armenia does not dare make such a claim.

As a fourth controversial step, Macron has been cooperating with some of the most authoritarian actors and regimes such as Abdel-Fattah el-Sissi of Egypt, Mohammed bin Zayed (MBZ) of the United Arab Emirates (UAE), and putschist Gen. Khalifa Haftar of Libya.

Macron even welcomed one of his authoritarian associates, el-Sissi, as a friend at the Elysee Palace, on Dec. 7.

Macron’s France is one of the main weapons suppliers to Egypt in the wake of the military coup in 2013. The two countries have improved their economic and military relations during el-Sissi’s rise to power after the military coup that overthrew the country’s first and only democratically elected president, Mohammed Morsi.

As one can easily infer from his explanations, Macron does not hold el-Sissi accountable for the crimes – documented by international human rights organizations including Amnesty International – that he committed during and after the military coup in 2013.

Macron rejects any call to take a stand against the authoritarian leaders in the Arab world on human rights. On the contrary, Macron, who gives unconditional support to the el-Sissi government, is determined to deepen defense and trade cooperation with Egypt.

As expected, the French president declared that his government will not stop weapons sales to Egypt on claims of human rights violations, despite United Nations calls to release human rights activists imprisoned by el-Sissi’s administration.

All those who are interested in Egyptian politics know well that there are thousands of political prisoners in jails and dozens of them face the death penalty.

During the press conference, Macron once again pointed out that “under the French secularism, blasphemy is allowed in France.” While defending his position, he referred to “the philosophy of the enlightenment and the foundation of the universalism of human rights.”

Macron claimed that the caricatures published in French media are not meant for Islam and the Muslim world, but represent “the free expression of someone who is, indeed, provoking, blaspheming.”

Then, he added that this is allowed in France. Macron, who has been introducing new bans for Muslims living in the country, claimed that he remained “a constant advocate of democratic and social openness.”

The most recent policies followed by the French president show his paradoxical stance in foreign policy behavior. For instance, he has been utilizing all kinds of instruments to alienate and impose sanctions on Turkey.

However, when it comes to Egypt, he thinks that “it is more effective to have a policy of dialogue than a policy of boycott.” He further claimed that he does not want to inhibit the effectiveness and ability of his partner el-Sissi in his fight against terrorism, his pro-French intervention in the Libyan crisis, and support for the French projects across the Sahel.

French officials do not miss the opportunity to criticize almost every political move in domestic politics and foreign policy. However, when it comes to Egypt, officials expressed that their government has a policy of avoiding public declarations about other states’ human rights records.

Macron’s paradoxical and assertive policies are a cause of concern for the French people as well as for many European, Middle Eastern and African countries.

It is clear that Macron’s moves in the international arena are an attempt to divert the French people’s attention from domestic problems to foreign developments.

Macron’s support for the authoritarian actors and regimes in the Middle East and Africa contributes to the polarization of the French people.

EU must distance itself from French aggression, Greek maximalism
Previous

Turkey-EU relations: Actual tensions, long-term interests
Next
Loading...
Loading...
We use cookies to ensure that we give you the best experience on our website. If you continue to use this site we will assume that you are happy with it.Ok