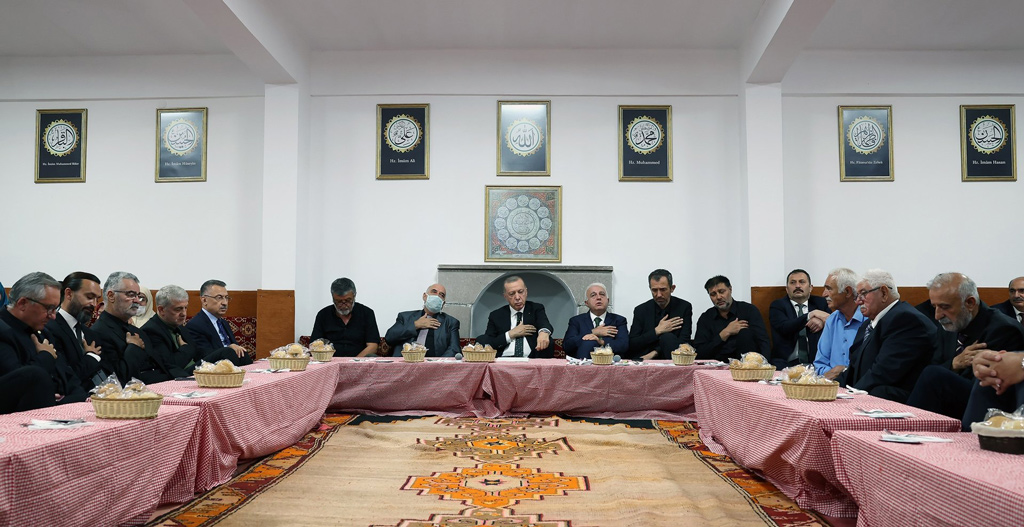 President Recep Tayyip Erdoğan’s visit to the Hüseyin Gazi Cemevi, an Alevi house of worship, following the recent assaults on three cemevis in Ankara came to be viewed as a sign that various identity groups were back on the political agenda. Some argued that Erdoğan’s visit, along with his plan to visit the Hacı Bektaş Lodge, was an 'investment for the election.'

As next year’s election draws closer, many issues in Turkish politics tend to become politicized. From foreign policy and national security to identity, economic challenges and everyday life, everything falls (and will continue to fall) within the scope of party politics. As such, we have every reason to expect crisis management, depending on domestic and external tensions, to be on the table.

That is hardly surprising during an election campaign in a geopolitically important country like Türkiye. It also makes perfect sense for the People’s Alliance and the opposition to contest the 2023 elections – which they identify as the “most critical election”– with all their energy and ambition.

The election campaign will take place amid questions over “who could run the country better in the age of international crises” and will feature occasional crises, competing discourses of “survival” and inclusive moves and proposals. The fact that almost all pollsters stress that undecided voters will determine the outcome, too, shall shape the rhetoric of all politicians.

It is possible to say that the election campaign will focus on the following areas: The debate over candidates and the political system, identity issues (including the Kurdish question, the Alevi community’s demands and the refugees), the economic expectations of various social groups, ideologically charged debates on “lifestyle,” counterterrorism and hot foreign policy topics like the Eastern Mediterranean, Greece, the European Union, the United States, Russia and Syria.

President Recep Tayyip Erdoğan’s visit to the Hüseyin Gazi Cemevi, an Alevi house of worship, following the recent assaults on three cemevis in Ankara came to be viewed as a sign that various identity groups were back on the political agenda. Some argued that Erdoğan’s visit, along with his plan to visit the Hacı Bektaş Lodge, was an “investment for the election.”

In truth, the Turkish president took a step to reunite the people in the face of acts of provocation. After all, the government has a responsibility to predict, prevent and manage such crises. In this sense, addressing questions of identity is important in preventing acts of provocation and managing crises.

Türkiye has already shifted its focus to next year’s election amid a debate over the opposition’s potential candidate(s). The fact that many political parties are discussing the Kurdish question and the Peoples’ Democratic Party’s (HDP) call for “radical proposals” on that front, too, has to do with the politicization of identity questions on the campaign trail. As such, we could witness an uptick in the demands of various groups and inclusive proposals designed to address them over the next months. It is also inevitable, however, that these demands are assessed in terms of the integrity of national identity and public administration.

Several demands – the recognition of cemevis as places of worship, native-language education and empowering local governments – relate to critical issues that would require the Turkish state’s reconstruction in terms of secularism and national identity. With the exception of the HDP, all political parties that delve into that debate must take into consideration that they stand to win over and lose certain voters.

Will the significance of next year’s elections in Türkiye, a country that many say has been polarized in recent years, lead to a fierce debate on the question of identity? Will the country end up in a spiral of identity politics?

I expect policy proposals that address questions of identity and rely on an inclusive discourse to gain importance – which would lead to partial regulation. Yet there is no reason to think that anyone will launch radical initiatives. Obviously, the various parties will test and accuse each other frequently. A brand of identity politics that makes radical suggestions and escalates tensions, however, would be received negatively by the electorate.

At this time, the opposition parties place economic challenges at the heart of their discourse. The main opposition Republican People’s Party (CHP), the Good Party (IP) and others come up with new proposals, including subsidies for minimum wage earners and tax cuts, every day to make life easier for many groups. Many of those proposals are aligned with what the government does to shelter the people from inflation.

It is not enough to portray that overlap as Erdoğan doing whatever the opposition says. After all, the voters still do not view the opposition as a viable alternative to addressing their problems. At the same time, the Turkish president, who has been in charge for two decades, has made certain accomplishments in foreign policy and regarding national security – which fuels the perception that he will fix the economy, too.

Interestingly enough, the opposition uses popular demands to mount pressure on the government, but that approach has been playing into the government’s hand. As the government meets those demands, the charge of “making investments for the election” loses impact.

Stories Matter, Not Numbers: The Ongoing War on Palestine
Next
Loading...
Loading...
We use cookies to ensure that we give you the best experience on our website. If you continue to use this site we will assume that you are happy with it.Ok