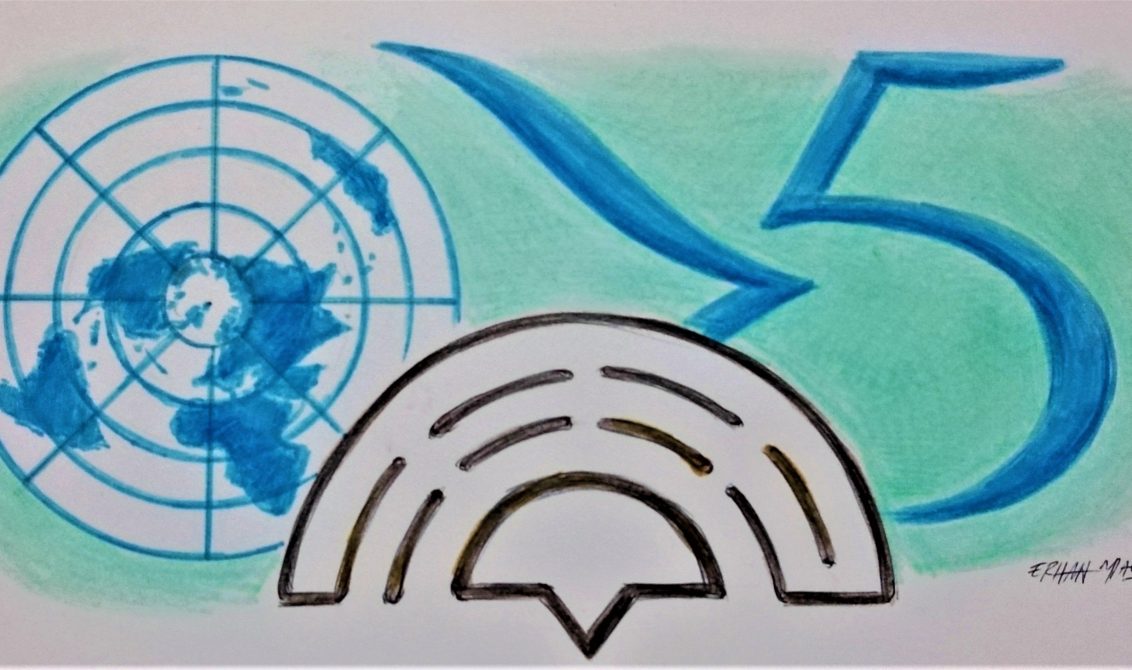 The phrase "The World is Greater Than Five" and ADF | Illustration by Erhan Yalvaç.

A new paradigm in diplomacy

The world may not be ready for the new paradigm in diplomacy proposed by Erdoğan, but it needs to be to ensure a better future

I borrowed the title of today’s column from President Recep Tayyip Erdoğan’s speech at the Antalya Diplomacy Forum (ADF). Reflecting on the crisis in Ukraine, the Turkish leader delivered an impactful address that criticized the current international system and highlighted the importance of diplomacy to find a way forward.

Before touching upon his key messages, however, I would like to briefly discuss the forum, which has become an attractive platform for Turkey’s active diplomacy. This year’s theme was “recoding diplomacy.” Indeed, the forum made headlines thanks to a historic meeting that captured the attention of governments around the world. On March 10, the foreign ministers of Russia and Ukraine met, with Foreign Minister Mevlüt Çavuşoğlu as the facilitator. The following day, leaders, diplomats, academics and journalists exchanged views on opportunities for diplomacy to regain its influence. It was indeed meaningful that the forum, which brought together more than 75 participants, took place amid the fresh uncertainty the international system is experiencing due to the Russia-Ukraine war and sought the solution in the realm of diplomacy.

In his opening address, Çavuşoğlu stressed that the forum was “a gift from Turkey’s 500-year-old foreign service” and underscored that diplomacy needed “a fresh language and perspective.”

Obviously, Turkey has highlighted the unfair nature of the current international system more than any other country. Erdoğan’s motto – “a fairer world is possible” – reflects the country’s long-standing call to reactivate diplomacy. In this regard, Turkey does not want the international system, including the United Nations, to collapse. Quite the contrary, it calls for a reform that is aligned with changes in the world.

U.N. Secretary General Antonio Guterres, who attended the forum via videoconference, too, threw his weight behind the attempt to recode diplomacy “in these challenging days” by saying that “diplomacy is the spirit of the U.N. Charter.”

Erdoğan, who has launched an intense diplomatic effort within the framework of the Ukraine crisis and the normalization policy, has given voice to the rejection of injustice as well as the victims of starvation and conflict. He identified the goal of recoding diplomacy by saying that “we are compelled to build the world of peace as opposed to war.” Highlighting the unfairness of the post-World War II order, which reflected the vested interests of its five victors, Erdoğan noted that the international system had gone bankrupt due to the Ukraine crisis. He thus underscored that Russia, one of the warring parties, being a permanent member of the United Nations Security Council brought the entire system to a standstill. Pointing to the gap between permanent and non-permanent members at the Security Council, the Turkish president insisted that he called for a reform of the U.N. system for “the interests of our nation as well as humanity itself.” He concluded that “a new global security architecture must be built to serve peace rather than the status quo – and to serve all of humankind rather than just five countries.”

Not after but before

Those remarks reflected Erdoğan’s commitment to take diplomacy to the next level. According to him, diplomacy must play an active role before, not after, crises break out. After all, each neglected problem ultimately hurts those that neglected it. It is necessary to consolidate, rather than promote, peace and to get involved before problems arise.

Noting that Turkey was “concerned over the transformation of a crisis between our neighbors into violent conflict” with regard to the Ukraine crisis, Erdoğan clearly criticized the Russian aggression and asked the following question: “Would we be facing the current situation, if the West and the world had spoken out against the occupation of Crimea in 2014?”

Yet, the Turkish president also criticized the West for isolating Russia in line with a new Cold War mentality. Drawing parallels between the exclusion of Russian culture and musicians and the deeds of Hulagu Khan, a Mongol ruler, he said that “we do not want any more Hulagus.”

Turkey pioneers a new approach to diplomacy with its discourse and actions. It goes without saying that the country’s search for a new paradigm is not romantic in nature. Turkey merely aims to look out for its interests and to uphold humanity’s fundamental values.

Turkey’s active diplomacy vis-a-vis the Ukraine crisis was the most obvious example of Erdoğan’s realist approach to foreign policy, which blends values with interests. The world may not be ready for that new paradigm. But at a time when global uncertainty and great power competition cast a shadow on our future, any call for a new paradigm that promises to shed light on what lies ahead is certainly valuable.

The impact of Ukraine war on the Middle East
Next
Loading...
Loading...
We use cookies to ensure that we give you the best experience on our website. If you continue to use this site we will assume that you are happy with it.Ok