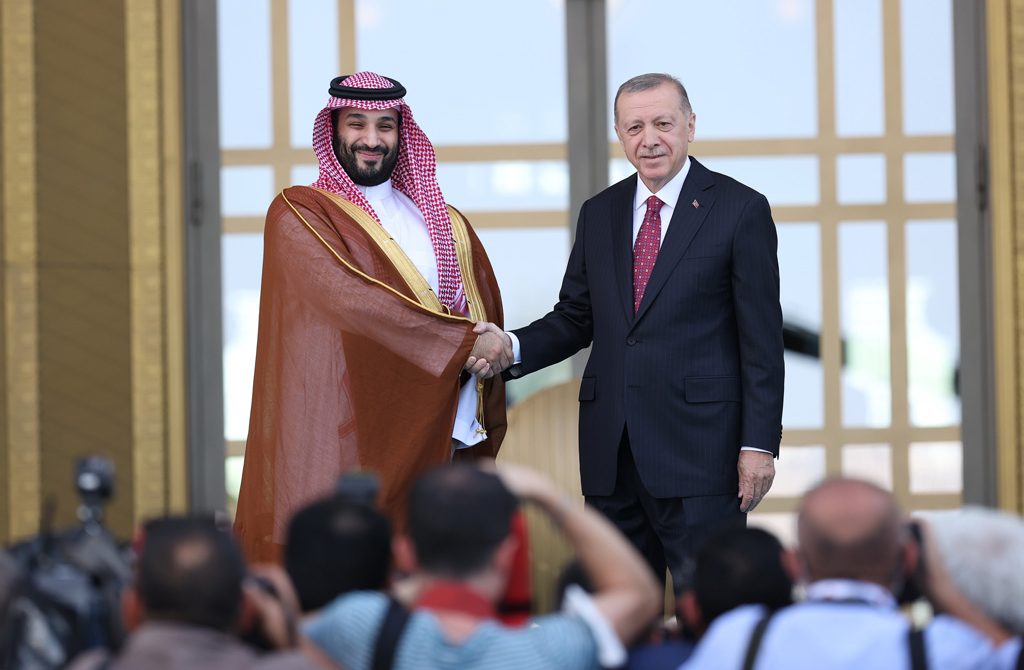 A new page in Türkiye-Saudi relations

The visit had global-level dynamics. On one hand, both countries want to decrease their respective dependencies on global powers and need to cooperate with one another. On the other hand, they want to increase their global autonomy. They have begun to instrumentalize a global power against the other.

Türkiye-Saudi Arabia relations, which remained cold and tense throughout the 20th century and improved during the second half of the 2000s, deteriorated after the Arab insurgencies and revolutions. While Türkiye supported the powers of change, Saudi Arabia supported the pro-status quo and counter-revolutionary forces. Bilateral relations that fell to their lowest level after the Egyptian military coup in 2013 became adversarial after the assassination of Saudi journalist Jamal Khashoggi in the Saudi Consulate in Istanbul.

A large coalition, which was later coined “the alliance of the globe” and led by the United Arab Emirates (UAE) and Saudi Arabia, has tried to otherize and isolate Türkiye in the Middle East. However, Türkiye has resisted the isolation attempts and successfully reversed the process in the region. By supporting and saving Qatar from the Saudi-led blockade and preventing the control of Tripoli by the putschist Gen. Khalifa Haftar in Libya, Türkiye has prevented anti-Türkiye developments.

With the beginning of the most recent normalization process in the region, the anti-Türkiye bloc, including Saudi Arabia, has decided to normalize relations with Ankara as well since the main reasons for otherizing and isolating Türkiye disappeared. First of all, Saudi Arabia decided to normalize its relations with Qatar, Türkiye’s main regional ally, at the beginning of 2021. King Salman of Saudi Arabia invited Qatari Emir Sheikh Tamim bin Hamad Al Thani to attend the Gulf summit held in al-Ula, Saudi Arabia. With the normalization of the Gulf states, one of the main reasons of otherizing Türkiye disappeared.

Second, global dynamics have changed the regional balance of power. The “alliance of the globe” collapsed after former U.S. President Donald Trump lost the presidential elections in the United States. President Joe Biden, who harshly criticized both Türkiye and Saudi Arabia, has declared that he will prioritize improving relations with Iran. A possible deal with Iran would pave the way for further Iranian regional expansionism, which has brought Riyadh closer to Ankara. For Saudi Arabia, besides Israel, Türkiye is one of the major regional powers that can balance the Iranian threat.

More importantly, Ankara has overcome all anti-Türkiye efforts. With the continuous increase in the cost of following an anti-Türkiye regional policy, Türkiye’s opponents had less incentives to pursue the trend. Ankara has increased its military power and became a deterrent regional player. In addition, its success in the defense industry and conflict zones such as Karabakh, Syria and Libya has increased the attractiveness of Ankara.

After organizing several meetings at different levels, President Recep Tayyip Erdoğan paid an official visit to Saudi Arabia on April 28-29, 2022. This was the first of its kind since 2017, when Erdoğan attended the funeral of the late King Abdullah. Erdoğan’s visit was a watershed for taking concrete steps in bilateral relations. Saudi Crown Prince Mohammed bin Salman’s (MBS) visit to Ankara on June 28 also provided a great opportunity to institutionalize bilateral relations.

MBS’s visit can be evaluated within three complementary contexts. The visit, which was held at a beneficial time for both countries, will fulfill the expectations of both sides. First of all, as two complementary economies, Ankara and Riyadh will improve their economic relations. From the Saudi perspective, the visit will attract new Turkish investments in certain sectors, especially infrastructural development, in Saudi Arabia. For instance, experienced Turkish companies can make great contributions to the Neom city project, the huge infrastructure project introduced by MBS several years ago. The restart of Umrah pilgrimages will contribute to the Saudi economy since Türkiye ranks first in terms of sending its people to Umrah. Second, Türkiye has emerged as one of the most reliable partners in the defense industry and as an alternative to the Western weapons exporting countries. Saudi Arabia may purchase Turkish drones in near future.

Similarly, Türkiye will also get economic benefits from the visit. Türkiye will be able to attract Saudi financial assets to invest in the Turkish market. After lifting the undeclared sanctions against Türkiye, the Saudi market will be opened to Turkish products and services. Türkiye will host Saudi tourists in near future. The economic benefits will surely lessen the pressure on Türkiye’s vulnerable economy.

MBS’s visit, which has significant regional implications, will accelerate the regional normalization process. After normalization with Qatar, Ankara and Riyadh began to share similar perspectives toward main regional issues and crises such as Syria, Iraq and Iran. As two main regional players, Türkiye and Saudi Arabia cannot ignore one another in the Middle East.

The visit had global-level dynamics. On one hand, both countries want to decrease their respective dependencies on global powers and need to cooperate with one another. On the other hand, they want to increase their global autonomy. They have begun to instrumentalize a global power against the other.

Madrid summit: Acquirement and its aftermath
Next
Loading...
Loading...
We use cookies to ensure that we give you the best experience on our website. If you continue to use this site we will assume that you are happy with it.Ok