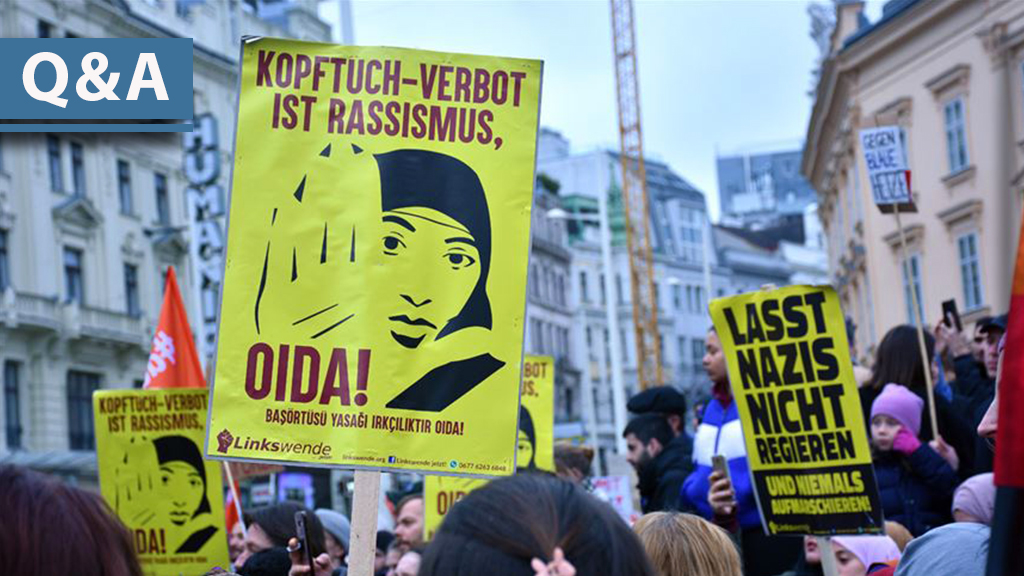 What is the hijab ban all about? Does this regulation not contradict with the principle of freedom of religion? How is the ban legitimized? What was the reaction of the opposition parties? What will be done by Muslims?

After implementing a hijab ban for children in kindergarten in late 2018, the Austrian government – consisting of the Christian democratic People’s Party (ÖVP) and the right-wing Freedom Party (FPÖ) – has now extended this ban to primary school. On May 15, the national parliament voted for a ban in primary school. Pupils up to 10 years old shall be forbidden to cover their hair with a hijab and can be fined with 440 EURO.

In order not to contradict the constitution, human rights, and freedom of religion, the legislative text spoke about banning the head coverings that cover most of the hair, not some of it like the Jewish kippah or the Sikh’s patka. Both are exempted from the regulation with a text stating that if the ears are also covered, such a garment is outlawed.

The two governing chancellors Sebastian Kurz and HC Strache (who stepped down on May 18, 2019 due to an internal crisis) announced that the hijab ban in kindergarten was only the first step towards a comprehensive restriction up to high school, university, and even public service for adult women.

The main argument for the ban was to fight the segregation of young pupils by framing the hijab as a means to sexualize the body of female pupils at an early age. The hijab was framed as a symbol of political Islam rather than a religious practice that is protected by the constitutionally guaranteed freedom of religious expression. Hence, a hijab ban would not mean injustice to women, but saving Muslim girls from Islamic oppression. As a conclusion, the ban was legitimized as a means to better integration.

These assumptions are not based on any evidence, but clearly show the ideological and Islamophobic framing of the Muslim religion. Although Austrian Muslims claim that wearing the hijab at this age was not the common practice, the act is targeting the imagined otherized Muslim. Also, the government has arrogated the definition of Islam, thus violating the principle of secularism not to interfere in religious affairs.

From the beginning, some opposition political parties indicated that they would agree in banning the hijab, but would only do so if there was a more comprehensive program of integration. Hence, the opposition parties such as the Social Democrats or the Liberal NEOS did not really challenge this act. On the contrary, the initiative to ban the hijab was not really contested. Even in national parliament, some MPs from the newly founded party Jetzt supported the law. Since the law did not receive a majority of two thirds – it was only backed by the governing parties – it does not rank as a constitutional law and is hence quite instable and can be litigated with greater ease.

The Islamic Religious Authority (IGGÖ) has announced its intention to put the law before the Constitutional Court, as soon as it is enacted. MPs from the ruling parties have also signaled that they foresee litigations and that there is a big chance this law will be challenged before the court.

When it comes to Iran, skepticism on US foreign policy grows
Previous

Deadlock in Idlib: Main actors and different scenarios
Next
Loading...
Loading...
We use cookies to ensure that we give you the best experience on our website. If you continue to use this site we will assume that you are happy with it.Ok