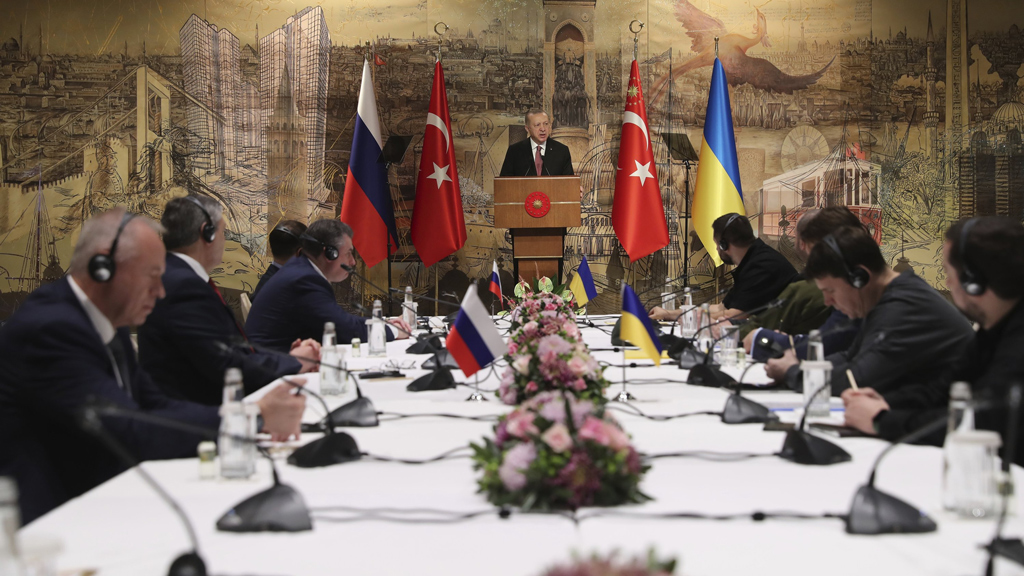 President Recep Tayyip Erdoğan gives a speech to welcome the Russian and Ukrainian delegations ahead of their talks, in Istanbul, Turkey, March 29, 2022. (AP Photo)

Why Erdoğan insists on Putin-Zelenskyy meeting

There is no reason to envy Turkey for actively facilitating the solution of a European dispute or to draw unnecessary parallels. Quite the contrary, the West needs to support Turkish efforts to end this war – which happens to hurt everyone’s interests.

Tt would be unreasonable to expect the peace talks in Istanbul to yield quick results. That the negotiations focused on six distinct issues, the parties made progress on all fronts (except Crimea and Donbass), and the foreign ministers are due to meet again soon are certainly positive developments. Indeed, the next step is a meeting between Russian President Vladimir Putin and Ukrainian President Volodymyr Zelenskyy. Obviously, President Recep Tayyip Erdoğan will strive to make that happen during Putin’s upcoming visit to Turkey.

That Russia initially committed to “reduce” its military assault on Kyiv and Chernihiv only to resume those operations, of course, reflected the ups and downs ahead. It is no secret that ending a war is much harder than starting it. In Ukraine, too, will the parties make progress toward a cease-fire and, by extension, establish peace by making certain stops along the way? As they continue their efforts to push back the opposite side, they will discuss terms at the negotiating table.

The Russians are likely to prolong the peace talks, hoping to develop fresh initiatives on the ground and are waiting to see if the Western alliance’s solidarity will weaken over time. The Ukrainians, in turn, will make certain attempts to force the Russian forces to retreat while continuing to receive military assistance from the West.

Meanwhile, Russia seems to be moving away from the idea of separating Ukraine into two halves, instead aiming to maintain control over the Donbass-Crimea line.

There is no reason to expect the United States, the European Union and the United Kingdom to walk back their commitment to weakening Russia. As such, the current course of the conflict encourages Putin to contain and eventually stop, rather than further escalate, the fighting.

In this regard, the Turkish proposal of “finding an honorable exit through diplomacy” could end up being the Russian president’s only option. What matters right now, however, is that the peace talks will be still underway when the parties conclude that the time has come for a cease-fire.

On his flight back from Uzbekistan, President Recep Tayyip Erdoğan spoke with a group of journalists, including myself. My sense is that the Turkish president remains committed to doing everything in his power to facilitate a cease-fire between Russia and Ukraine. For that purpose, he insists on bringing together Putin and Zelenskyy – which builds on his 20 years of experience and his faith in leader-to-leader diplomacy with his Russian and Ukrainian counterparts.

It took more than one attempt to make the peace talks in Istanbul happen. Let us recall that Erdoğan has been trying to arrange a meeting between the Russian and Ukrainian leaders since the conflict’s early days.

Where Putin stands remains the most important factor for ending the war. It goes without saying, however, that the war will inflict more and more damage on the Russian economy, military and strategic interests. In this sense, the cost will be much higher if the Russian president makes up his mind too late. That is where Erdoğan’s call on Putin to meet with Zelenskyy comes in.

But why is it important for the two presidents to meet?

Erdoğan knows that a meeting between the Russian and Ukrainian leaders could take the peace talks to the next level. That the Russian negotiators adopt a strong and uncompromising stance in such settings is a typical feat of Russian diplomacy. Although the context was obviously different, similar problems had occurred during the Syria talks between Turkey and Russia. It took leader-to-leader meetings to take critical steps.

This time around, the Turkish president wants to bring together Putin and Zelenskyy in order to use the “leader factor” for a solution. To get there, the Russian leader must conclude that the time has come to pause or end the fighting. Likewise, Zelenskyy needs to be able to show due resolve to enter into negotiations and put that agreement into action.

Peace requires both parties to make certain concessions. In this sense, Zelenskyy will meet his real challenge after meeting with his Russian counterpart. It could be difficult to sell the Ukrainian people on the terms of that agreement and hard to persuade the United States, the European Union and the United Kingdom.

Meanwhile, there is no reason to envy Turkey for actively facilitating the solution of a European dispute or to draw unnecessary parallels. Quite the contrary, the West needs to support Turkish efforts to end this war – which happens to hurt everyone’s interests.

Channels of dialogue with Greece more open today than before: Turkish foreign minister
Next
Loading...
Loading...
We use cookies to ensure that we give you the best experience on our website. If you continue to use this site we will assume that you are happy with it.Ok