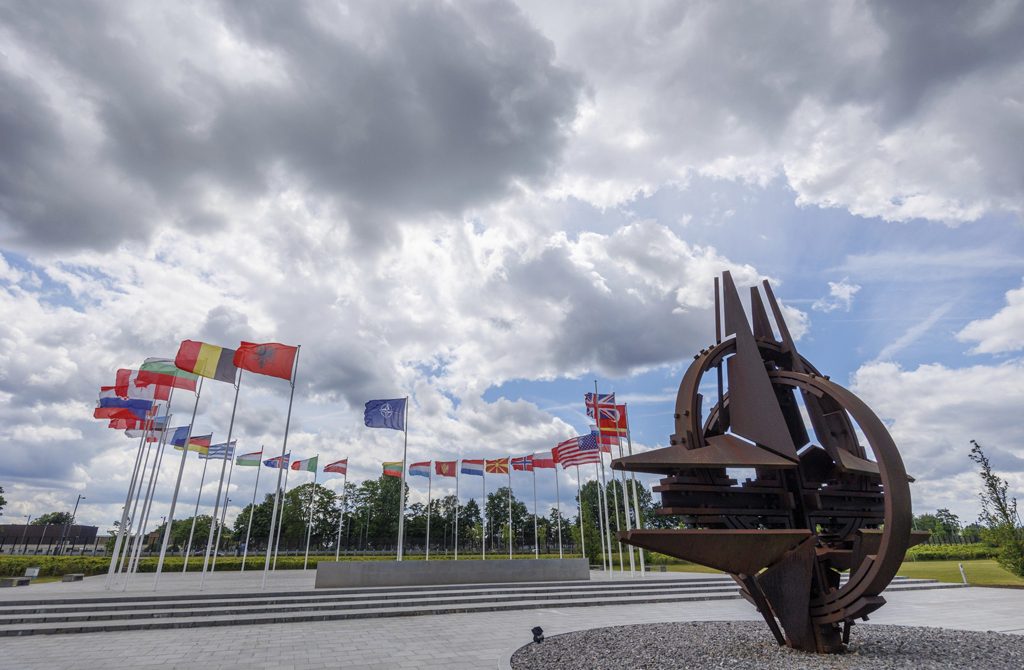 Flags of NATO member countries flap in the wind outside NATO headquarters, in Brussels, Belgium, May 25, 2022. (AP Photo)

The NATO allies need to make rational decisions to promote intra-alliance solidarity at the Madrid summit.

The NATO summit will take place in Madrid on the last two days of June. That summit has attracted attention due to updates to the 2030 Strategic Concept and the alliance’s messages to Russia and China. Indeed, many consider the upcoming event the most important summit of the last 21 years.

NATO Secretary-General Jens Stoltenberg announced that the organization will declare Russia to be “no longer a partner, but a threat” and describe China as a “challenge” to its interests, values and security.

The Madrid summit will also capture the attention of governments around the world due to the membership applications of Sweden and Finland and the relationship among the allies. It is a well-known fact that Western diplomats have been shuttling back and forth between Turkey and Sweden and Finland since President Recep Tayyip Erdoğan identified the conditions for the admission of those nations. Specifically, Ankara demands that the two countries demonstrate in concrete terms that they have ceased to support the PKK terrorist organization, and its Syrian wing YPG, and that they abolish all embargoes targeting Turkey’s defense industry. According to Turkey, NATO membership requires the satisfaction of those criteria.

Meanwhile, the Greek media report that Greek Prime Minister Kyriakos Mitsotakis will double down on his anti-Turkish campaign, which he started in Washington.

Some experts believe that such disputes make NATO seem divided at a time when the allies need to show solidarity.

The Russian invasion of Ukraine on Feb. 24 marked the beginning of a new era for the West and NATO. The initial reactions to the invasion – including heavy sanctions, increasing defense budgets, arms deliveries to Ukraine and the deployment of troops toward the Alliance’s eastern border – were perceived as Western solidarity. The fact that Russia still has the upper hand in southern Ukraine after four months, however, leads some to conclude that the war could go on for years.

Indeed, even a visit by four European leaders to Kyiv, which was intended as a show of solidarity, could not conceal the disagreements in Europe over what to do about Russia: to reach a settlement or to give the Ukrainians more heavy weapons and help them fight more effectively.

Obviously, the invasion transformed Russia from a “partner” to a “threat” to Europe. Yet the continent has no choice but to live with Russia for decades to come. Fully aware of that fact, Western leaders have begun to change their rhetoric. Pope Francis said that NATO’s expansion might have “provoked” Russia. Prior to his visit to Kyiv, French President Emmanuel Macron argued that “we must not humiliate Russia so that the day when the fighting stops we can build an exit ramp through diplomatic means.” Those signs hint that the Western alliance’s shared, anti-Russian view could weaken as the war drags on.

Russian President Vladimir Putin, in turn, has stuck to his Russian nationalist discourse. Most recently, the Russian leader compared his country’s expansionist moves to Peter the Great’s conquest of the Baltic coast in an 18th-century war with Sweden. Furthermore, he challenged the West by stating that “the unipolar world order is finished” at the 25th St. Petersburg International Economic Forum. Putin claims that Western sanctions against Russia have not hurt his country, yet worsened the economic conditions in Europe and the United States.

Taking place against that international backdrop, the NATO allies need to make rational decisions to promote intra-alliance solidarity at the Madrid summit. At the top of the list is supporting Turkey in its fight against the PKK and the Gülenist Terror Group (FETÖ). Fighting terrorism has been on NATO’s agenda since 2001 anyway. Turkey does not oppose NATO’s expansion in principle, but, having given back more to NATO than it received in 70 years, it expects everyone to act in line with the spirit of the alliance. In this regard, it expects Sweden and Finland to meet the criteria for membership.

Stoltenberg is among the keenest observers of Turkey’s role in the international system. The NATO leaders must recall Turkey’s strategic importance “between Europe, Russia, Iraq and Syria” and that “no other NATO ally suffered more terrorist attacks than Turkey.” That is the way to achieve intra-alliance solidarity.

Erdoğan has already announced how he will respond to Mitsotakis if the Greek prime minister promotes an anti-Turkish agenda in Madrid despite his country’s violations of international law: “Come to your senses.”

To ignore Turkey’s righteous demands would cast a shadow over the critically important summit in Madrid.

Understanding Türkiye's position on NATO enlargement
Next
Loading...
Loading...
We use cookies to ensure that we give you the best experience on our website. If you continue to use this site we will assume that you are happy with it.Ok