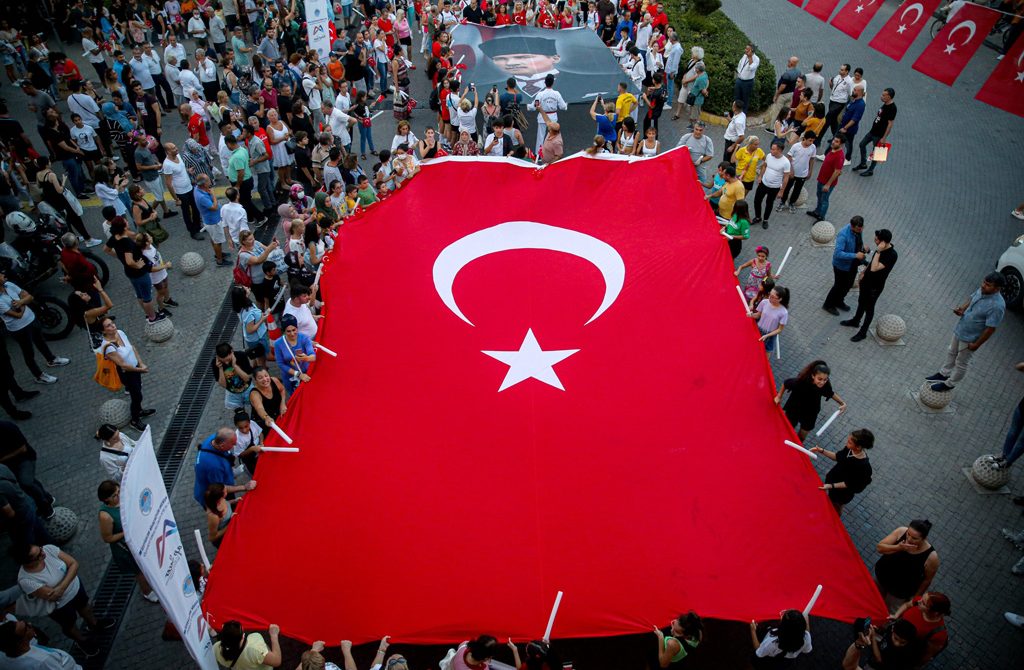 Turks carry the Turkish flag for the celebration of the 100th anniversary of Victory Day, Mersin, Türkiye, Aug. 30, 2022. (AA photo)

President Recep Tayyip Erdoğan joined the one-tweet frenzy by posting the word “Türkiye” on Twitter. Undoubtedly, the word that describes one’s country is the most likable for any nation’s citizen. Accordingly, the Turks derive peace from the word “Türkiye” – whether they notice it or not. The sense of sharing the fate of our nation, even though its circumstances may leave us concerned at times, is what makes us Turkish.

There is another phrase, which violates the “one-word tweet” principle because it consists of two words, that we will hear more and more frequently ahead of next year’s elections: “new Türkiye.” This phrase has also been used by the ruling Justice and Development Party (AK Party) to combat the guardianship regime and claim a more influential position for the country in the international arena, as it implemented a series of reforms that amounted to a “silent revolution.” Whereas the People’s Alliance prefers the idea of a “stronger Türkiye,” that phrase rests on the assumption that the country has assumed a new and better position than the guardianship regime’s old Türkiye. Meanwhile, Republican People’s Party (CHP) Chairman Kemal Kılıçdaroğlu has been saying that the opposition will “rebuild” the country.

That the opposition is using the phrase ahead of next year’s elections suggests that the Turkish people will witness a competition between at least two visions for a “new Türkiye.” For the record, that phrase has been used several times over the course of Turkish political history: In the second constitutional era, during the republic’s establishment, under the Democratic Party (DP) in the 1950s, under the Motherland Party (ANAP) in the 1980s and under the AK Party since 2002.

Obviously, it is hardly surprising that the discourse of “new Türkiye” has attained such popularity as the republic’s second century will begin with the 2023 elections. Claiming that the country is in bad shape, the opposition has called for a comprehensive restoration. The government, in contrast, wants to further increase Türkiye’s level of activity and strength in the international arena.

Taking a quick look at three news reports from Friday alone would suffice to establish that our country has become far more important:

1. French President Emmanuel Macron said that Türkiye must not be the only power holding talks with Russia.

Those three stories are enough to demonstrate that Türkiye’s international standing has significantly improved in recent years.

A debate over what “new Türkiye” should mean between the various candidates on the campaign trail would certainly contribute to Turkish democracy. It is also understandable that the opponents of the AK Party, which has been in power for 21 years, have accumulated serious expectations.

It is no secret either that democracies witness harsh wars of words during periods of comprehensive transformation. The Brexit referendum was a case in point. More recently, the United States has been talking about its democracy being “under attack from within.” With the midterm elections around the corner, U.S. President Joe Biden has not only described that contest as a “battle for the soul of the nation” but also identified his predecessor, Donald Trump, and his supporters as a “threat.”

All the signs suggest that next year’s Turkish elections will take place in a highly dynamic, intense and debate-filled atmosphere. As the several warnings against chaos and acts of provocation indicate, however, the political elite must remain vigilant at all times.

It is possible, however, to identify two unfortunate statements from the opposition: DP Chairperson Gültekin Uysal recently claimed that the AK Party should be shut down. Meanwhile, Ahmet Şık, a member of Parliament affiliated with the Workers’ Party of Türkiye (TIP) argued that the AK Party and the Nationalist Movement Party (MHP) would not be able to function after the 2023 elections: “They will be a mess anyway. They will be taken to court for being members of a criminal organization. The AK Party will not be treated like a political party either. It will be outlawed as a criminal organization.” Kılıçdaroğlu also pledged to reinstate all former public employees that were dismissed by decree after the July 15, 2016 coup attempt.

Those statements cast a dark shadow on the opposition’s idea of a “new Türkiye.” It is impossible for anyone that suffers from revanchist anger or seeks to reverse the country’s progress in the fight against terrorist organizations like the Gülenist Terror Group (FETÖ) and PKK to inspire confidence and hope in the electorate.

The US-China Rivalry over Space and Small Satellites Reaches New Levels
Next
Loading...
Loading...
We use cookies to ensure that we give you the best experience on our website. If you continue to use this site we will assume that you are happy with it.Ok