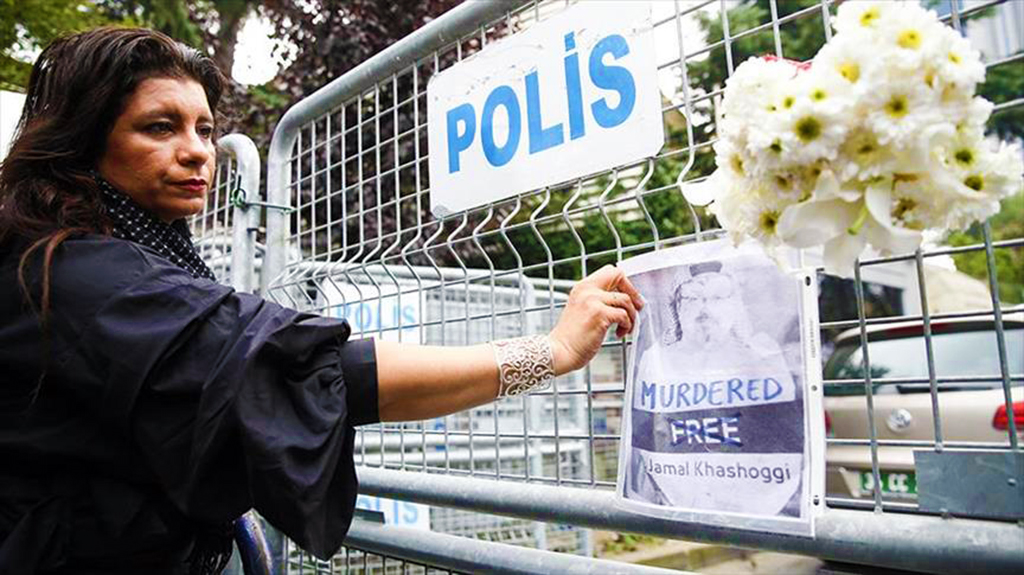 Sahar Zaky, a Egyptian-origin Canadian activist protested the murder of Washington Post columnist Jamal Khashoggi. Zaky places flowers and holding a placard reading “murdered here” stood outside the Saudi Consulate in Istanbul where the journalist was last seen on Oct. 2.

Where will Khashoggi’s killers stand trial?

The investigation into Saudi journalist Jamal Khashoggi’s slaying entered a new stage on Thursday, as a spokesman for Saudi Arabia’s chief public prosecutor formally announced that Khashoggi’s murder was premeditated and the body was dismembered postmortem. He told reporters that 11 individuals were charged in connection with the murder and the prosecution will reportedly seek the death penalty for five suspects. According to the Saudi prosecutor’s latest version of events, the order to set up a death squad came from Ahmed al-Assisi, the deputy head of the Saudi mukhabarat and a close ally of Crown Prince Mohammed bin Salman (MBS). Saud al-Qahtani, the former advisor of the Saudi royal court, is also under investigation. Yet the Saudi authorities are not looking into MBS’s links to the murder.

One thing is clear: The Khashoggi murder would have been covered up already, had it not been for Turkey’s commitment to shed light on what happened and its skill in evidence collection. The Saudi prosecutor was forced to make a statement when the Turkish authorities shared the evidence with friends and allies, and called for an international investigation. Yet Riyadh’s admission that Jamal Khashoggi’s murder was “a crime and a big mistake” isn’t enough. The Saudi version of events covers everything except what really matters. Three big questions remain unanswered: Where is the body? Who was the local collaborator? Who gave the orders?

The last question is particularly important. Nobody in their right mind would believe that the death squad’s orders came from the deputy head of the Saudi intelligence and no one higher up the food chain. It would be unreasonable to think that a group of intelligence officers could carry out this high-profile operation without political backing. At the very least, there is no doubt that the political leadership made the decision to spirit away Khashoggi to Saudi Arabia. Even if the Saudis were to admit to the political leadership’s complicity in the journalist’s murder, the current version of events wouldn’t explain why an autopsy expert was included in the team. As such, there is no doubt that the Saudi intelligence was instructed to bring Khashoggi back “dead or alive.” Hence the elaborate preparations.

The question remains as to where Jamal Khashoggi’s killers will stand trial. This is an important political and legal matter. Ankara wants an international investigation into the crime. Yet the United Nations would be unable to punish the perpetrators. U.N. investigators would typically share their findings with the U.N. Security Council. At the same time, Turkey demands that the 15 Saudi intelligence operatives, who traveled to Istanbul for the murder, be held accountable under Turkish law. The Turkish claim rests firmly on the Vienna Convention. The Turks have also requested the extradition of those individuals on the basis of its sovereignty rights under penal law – the principle that crimes committed in a given country fall within the jurisdiction of that country’s courts.

Riyadh desperately rejects an international investigation and refuses to hand over the suspects to Turkey. Instead, the Saudis have offered to sign a cooperation agreement with the Turkish authorities about the murder and invoke the principle of the non-extradition of nationals. In other words, they make the case that Saudi Arabia cannot be expected to hand over its citizens to another country to stand trial there. As such, Riyadh is likely to reject the extradition request and pledge to hold accountable the suspects itself. Nor has Saudi Arabia signed the Rome Statute. The country does not recognize the jurisdiction of the International Criminal Court (ICC). Yet Saudi Arabia’s deepest concern is that the suspect could tell the Turkish authorities exactly who gave the order to kill Jamal Khashoggi – which is why they won’t send the killers to Turkey.

Again, the world would have to believe the Saudi consul general’s “cupboard defense” had Turkey not properly investigated the murder and mounted pressure on the Saudis to extradite or hold accountable the suspects. Still, Foreign Minister Mevlüt Çavuşoğlu’s pledge to “discover who gave the orders and identify the true instigators” and to “share the developments with the international community” suggests that this isn’t the end of the Khashoggi investigation.

Saudi Arabia shared its latest version of events with the international community because it assumes to know what evidence Turkey has against the killers. We have seen an admission of guilt accompanied by a thinly veiled effort to protect the instigators. Yet Turkey does not believe that the Khashoggi murder will go away just yet. We will see what new information will come to light.

Analysis: The murder of Jamal Khashoggi and the future of Middle East politics
Previous

Washington needs an exit strategy for its YPG policy
Next
Loading...
Loading...
We use cookies to ensure that we give you the best experience on our website. If you continue to use this site we will assume that you are happy with it.Ok