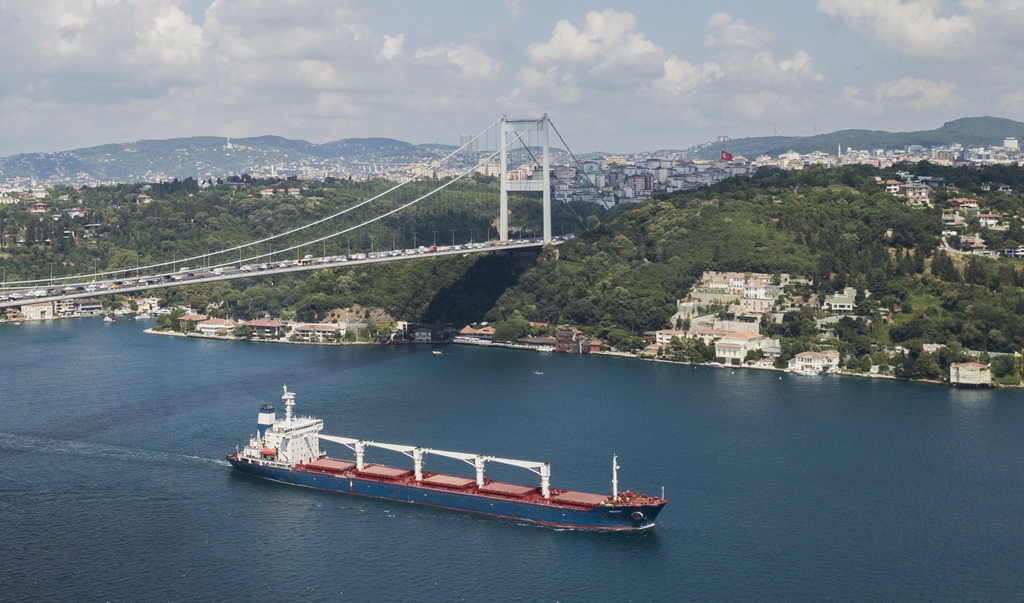 On Tuesday evening, two critical developments took place at two straits: Within the framework of the grain deal, which Ukraine and Russia reached thanks to Türkiye’s hard work, the first Ukrainian vessel reached the Bosporus – just as the United States and China were experiencing tensions over the Taiwan Strait. Refusing to heed Beijing’s stern warning, the Speaker of the U.S. House of Representatives, Nancy Pelosi, landed in Taiwan.

Let us start with the delivery of grains, though. The deal, which facilitated the shipment of 20 million tons of grain from three Ukrainian ports for a period of 120 days, was arguably the most positive news since the Russian invasion of Ukraine. Yet that development, which will ease the global food crisis, and the former German Chancellor Gerhard Schröder’s remarks about Russian President Vladimir Putin’s interest in the negotiations to end the war signal that a cease-fire is around the corner.

Ukraine will likely launch a counteroffensive in the coming months and Russia’s strong response will lead to further escalation. That, in turn, would lead the current crisis between the West and Russia, which turned into a war of attrition, to reach a new level. To date, Western economic sanctions have failed to force Russia on its knees. The European energy crisis, however, worsens. In a way, the sanctions had a more severe impact on Europe than Russia against the backdrop of great power competition. The Kremlin insists that the West was foolish to resort to sanctions, believing that sanctions created an opportunity for Russia to weaponize natural gas. Moreover, Russia has been strengthening its strategic relations with non-Western heavyweights like China, India and Iran to pave the way to a new network of economic relations, using national currencies to trade goods and implementing special economic cooperation programs.

Let us recall that the grain crisis had deeply worried the West. Critics warned that the Russians were trying to incite protests and domestic turmoil in North Africa to try and mount migratory pressure on Europe. Some observers currently argue that Russia agreed to the grain deal to repair its image but could nonetheless use that weapon at will. Moreover, experts warn that Europe will face certain challenges this winter – which, they say, could make the victory of populist/right-wing parties and leaders more likely in many elections scheduled to take place in 2023. The great power competition vis-à-vis the Ukraine crisis moves in a direction that could create problems for European countries, starting with Germany.

As the Ukraine crisis continues to impact Europe, the U.S. took a new step to escalate tensions with China. Nancy Pelosi, who became the first Speaker to visit Taiwan after a quarter century, made sure to talk about solidarity among democracies against autocracy. Experts believe that Beijing’s inability to prevent that visit, which violated its One China policy, represented a symbolic victory for Washington. That move, which Beijing interpreted as a clear act of provocation, demonstrated America’s support for its allies in the Indo-Pacific region.

One way or another, the U.S.-China rivalry has thus reached a new level. The Chinese could not prevent Pelosi’s plane from landing in Taiwan; the most recent crisis was significant enough to ring alarm bells in China. Keeping in mind that the Biden administration did (or could) not stop Pelosi’s visit, one could assume that more people in Washington are leaning toward confronting China sooner rather than later. It is also clear, however, that this most recent move will serve to bring China and Russia closer.

China faces a tough decision. How will it respond to the U.S., which challenged Beijing by starting a crisis around Taiwan – considered a red line by the Chinese? Failure to deliver an effective response to such “acts of provocation” would signal that China does not have what it takes to reach its regional goals. However, it would not serve the Chinese interests to confront the U.S. sooner rather than later. For now, the Chinese media claims that it was actually Beijing that scored a diplomatic victory, recalling that Washington needs China to deal with climate change and North Korea’s nuclear activities.

Whereas China could act cautiously, the U.S. might make additional moves. However, I wonder how Washington intends to manage tensions with both Russia and China – and with whom it would start negotiations and at what point.

Insisting on candidacy and 'future of the state'
Previous

Why is the Sochi meeting significant?
Next
Loading...
Loading...
We use cookies to ensure that we give you the best experience on our website. If you continue to use this site we will assume that you are happy with it.Ok