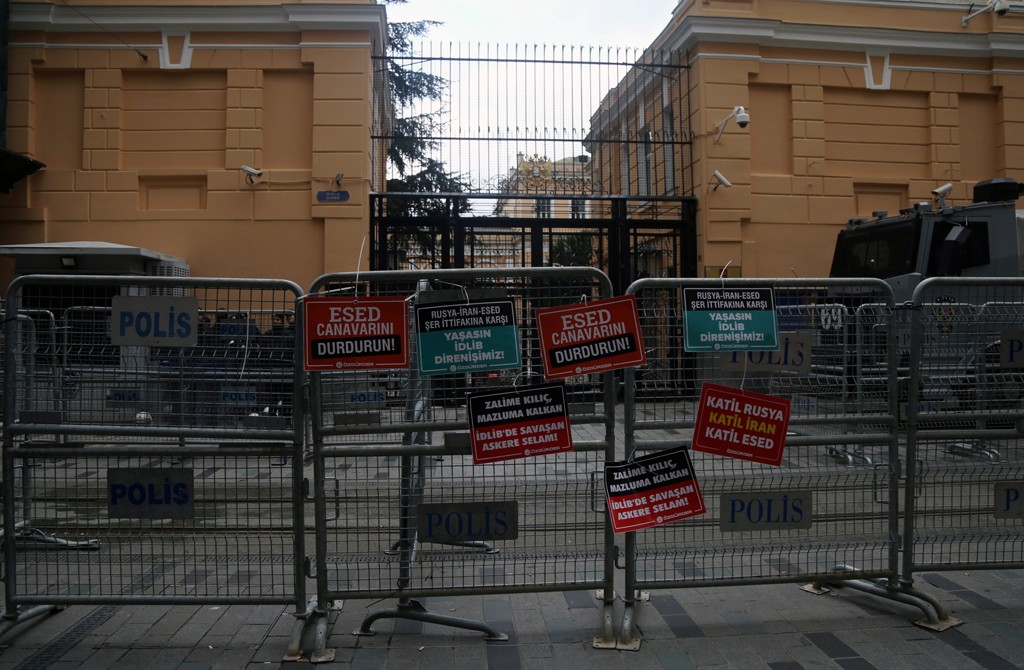 Placards that contain anti-Russia, -Assad and -Iran slogans are attached on security barriers outside the Russian Consulate following a protest against the killing of Turkish soldiers in Syria's Idlib region, Istanbul, Feb. 29, 2020. (REUTERS Photo)

Turkey's sole wish in Idlib is to maintain domestic and regional stability. This is what all involved actors must be aware of first.

urkey received some unfortunate news from Idlib on Thursday evening when the Russian-backed regime forces killed 33 Turkish troops. The Russians, who did not stop Bashar Assad’s attack despite having received information from Ankara about the whereabouts of the Turkish forces, are responsible for what happened in Idlib.

In the wake of Thursday’s attack, Turkey used a fleet of armed drones to eliminate 329 regime operatives and destroy 200 targets. Presidential Communications Director Fahrettin Altun announced that the country considered all regime elements as “legitimate targets.” He also urged the international community to protect Idlib’s civilians and enforce a no-fly zone. “There is no difference between leaders who ignore what is happening in Idlib and their predecessors, who watched the Rwandan and Bosnian genocides from the sidelines,” he said.

The Turks did not stop there. They gave Syrian refugees the green light to go to Europe, making it clear to Western governments that Turkey cannot shoulder the burden of another refugee crisis, now unfolding in Idlib, alone. At the same time, Ankara called for an emergency NATO meeting for consultations and President Recep Tayyip Erdoğan spoke by phone with world leaders Donald Trump, Vladimir Putin, Angela Merkel, Emmanuel Macron and others.

Those steps attest to Turkey’s commitment to a diplomatic solution to the Idlib crisis. A comprehensive military operation, however, is still in the cards. If anything, Erdoğan is reportedly more determined than ever before to take military action if necessary. He will make his final decision after the upcoming Turkish-Russian summit.

Putin’s response is crucial now, as he has little time left to repair Erdoğan’s eroding trust in Turkey’s relationship with Russia. The Russian president must either force Assad to comply with the Sochi agreement or get out of the way and let Turkey handle the regime problem.

Turkey’s military casualties represent a fresh escalation in the Idlib crisis. Although Moscow denies any involvement in Thursday’s attack, the Turkey-Russia relationship suffered a very serious blow. Leader-to-leader diplomacy is the last exit before a strategic rupture in bilateral relations. If the two countries cannot find a new solution within the Sochi framework, the rapprochement of recent years could give way to alienation.

Turkey and Russia, which kept their conflicts of interest in Syria and Libya under control until now, could face new problems in Iran, Libya and elsewhere if their paths cross. Obviously, several third parties would be eager to take advantage of the Turkish-Russian disagreement. The Turks aren’t just monitoring Moscow’s behavior. Reactions from Washington and Brussels, too, are on Turkey’s radar – the big question being what concrete support, beyond initial statements, the West will offer. Therefore, Erdoğan’s phone call with Trump was no less significant than his conversation with Putin.

If the Americans decide to avoid a military confrontation with Russia in the Syrian theater, they will miss a historic opportunity to repair Washington’s strained relations with Turkey. At the same time, the sense of being left alone by NATO and the U.S. could become more popular among Turks. Asking Turkey whether it learned who its true friends are does not help right now. This is a time for deeds, not words.

Nor does it make sense to make concrete Western support in Idlib contingent upon the S-400 air defense system. Limited military assistance to Syrian rebels or symbolic statements and visits won’t be enough either. Sen. Lindsey Graham’s call for a no-fly zone deserves recognition.

If Washington shies away from a military engagement in Idlib today, it will signal to Moscow that America expects to have no say at the negotiating table for Syria in the future. Again, American inaction will amount to tacit approval of Russian blackmailing of Europe using Syrian refugees. Finally, the U.S. reluctance to act will effectively inform Turkish policymakers that they have no choice but to work with Moscow.

Turkey can no longer bear the burden of refugees. It is not in a position to stop the march of Syrians to Europe. For the record, Turkey’s decision not to intercept illegal immigrants isn’t blackmailing. The Turks wish to preserve their domestic stability. As a last resort, they had to make a final choice that the West, implicitly, made available to them.

Idlib crisis: Turkey’s deterrent power, Europe's reluctance
Next
Loading...
Loading...
We use cookies to ensure that we give you the best experience on our website. If you continue to use this site we will assume that you are happy with it.Ok