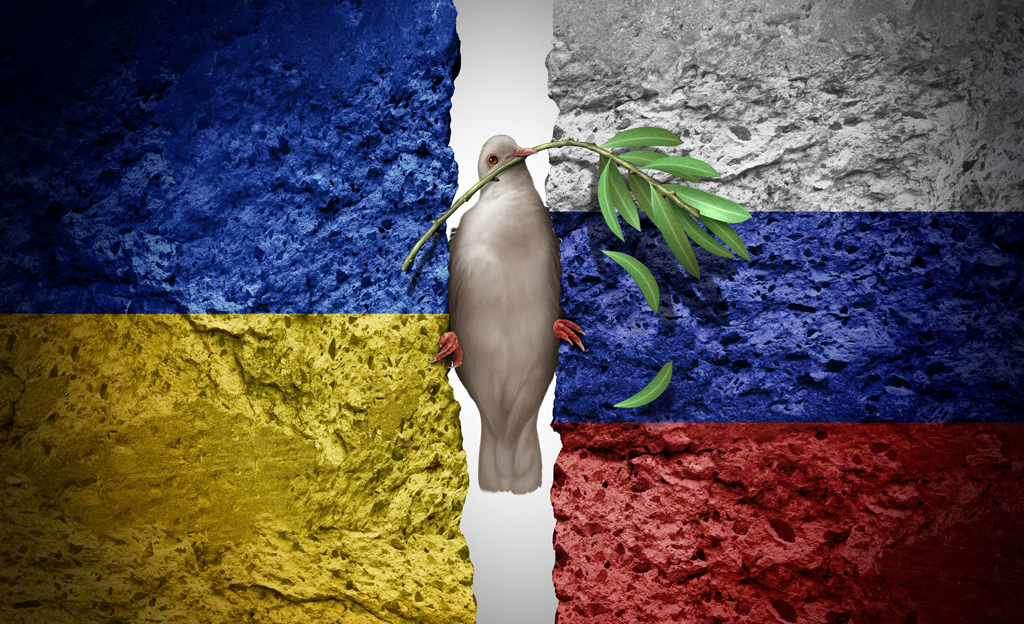 Dove of peace between Russia and Ukraine | Illustration by Shutterstock.

The meeting of Russian Foreign Minister Sergey Lavrov and Ukrainian Foreign Minister Dmytro Kuleba, which took place on the sidelines of the Antalya Diplomacy Forum, did not lead to a cease-fire. The war in Ukraine has not yet reached a point where the parties would be willing to shake hands on a cease-fire and a comprehensive peace agreement.

Hardly anyone expects the Russians to stop short of conquering Kyiv, the Ukrainian capital. Having made quick advances in the south, Russia mounted pressure on many towns, including the capital, yet they don’t think they have accomplished enough to lay down the terms of negotiations. It would seem that Moscow wants to cut off Ukraine from the Black Sea and push it to the west of the Dnieper. The Russians also appear to think that they can withstand severe international sanctions until they have largely occupied Ukraine.

Still, Turkey’s diplomatic initiative, which started with President Recep Tayyip Erdoğan’s offer to mediate talks and resulted on March 10 with a trilateral meeting in Antalya, is important. The fact that Turkey’s foreign minister, Mevlüt Çavuşoğlu, “facilitated” the first contact between his Russian and Ukrainian counterparts signaled that the country’s policy of “active neutrality” could contribute to peace, depending on the future course of the conflict. In this sense, the two ministers’ agreement on the continuation of dialogue and a meeting between their presidents was certainly positive. Yet more effort is needed to facilitate a temporary cease-fire and establish humanitarian corridors.

At the end of the 90-minute meeting in Antalya, the Ukrainian delegation described Russia’s demands as “unacceptable,” whereas the Russians seemed to engage in negotiations as part of their military campaign. Indeed, Lavrov took that opportunity to make fresh arguments designed to legitimize his country’s invasion of Ukraine. In this regard, he claimed that Russia faced an existential threat, accused Kyiv of never actually negotiating and argued that the West provoked Ukraine. The Russian minister also said that the European Union encouraged the delivery of lethal weapons to Ukraine and claimed that the biological research facilities in Ukraine could be used to develop biological weapons.

With regard to the West’s heavy economic sanctions, Lavrov stated that his country was “never going to be dependent on the West again.” He also went all-in regarding oil and natural gas: “As for oil and gas: We leave it all to the discretion and conscience of our Western colleagues. We have never used oil and gas as a weapon. If they do not buy oil and gas, we won’t insist on them buying (from us). If they want to substitute it, they are welcome to do so.”

It remains extremely difficult to predict when Russia’s invasion of Ukraine will come to an end. One thing, however, is clear: The positive relationship between Russia and the West, which some expected to emerge after the Cold War, has completely collapsed. The country’s isolation by the U.S. and the EU will have a lasting negative impact on Russian policymakers. The same goes for Russia when it comes to Europe, Eastern Europe and the Baltic states. Although the Russian foreign minister claimed that his country had been “compelled” to invade its southern neighbor and accused the West of playing the nuclear card, the idea of Russian expansionism has been permanently carved in the minds of Europeans already.

Going forward, the question of a humanitarian corridor will become much more important. It goes without saying that the Kremlin will use the timing of that step to signal its decisiveness. Let us recall that Russia used temporary cease-fires and humanitarian corridors to deepen the invasion in Syria. A similar fate awaits Ukraine’s besieged towns, starting with Mariupol. The civilian population – which could resist, participate in irregular warfare, or otherwise create a problem of governance – will be forced to evacuate those places.

In this sense, this is the beginning of the war’s third stage – following Russia’s quick advance (the first stage), which was followed by the Ukrainian resistance and an increase in Western support. At this time, the Russians aim to drive the civilians out of Ukrainian towns to deepen the war, as the West takes its economic sanctions, including in the energy sector, to the highest level.

The possibility of an end to the war through diplomacy before the completion of this third stage remains remote. Nonetheless, Turkey’s decisive efforts to promote diplomacy and mediate talks are extremely valuable. Those steps will pay off in the war’s fourth chapter – whenever it may begin.

A new paradigm in diplomacy
Next
Loading...
Loading...
We use cookies to ensure that we give you the best experience on our website. If you continue to use this site we will assume that you are happy with it.Ok