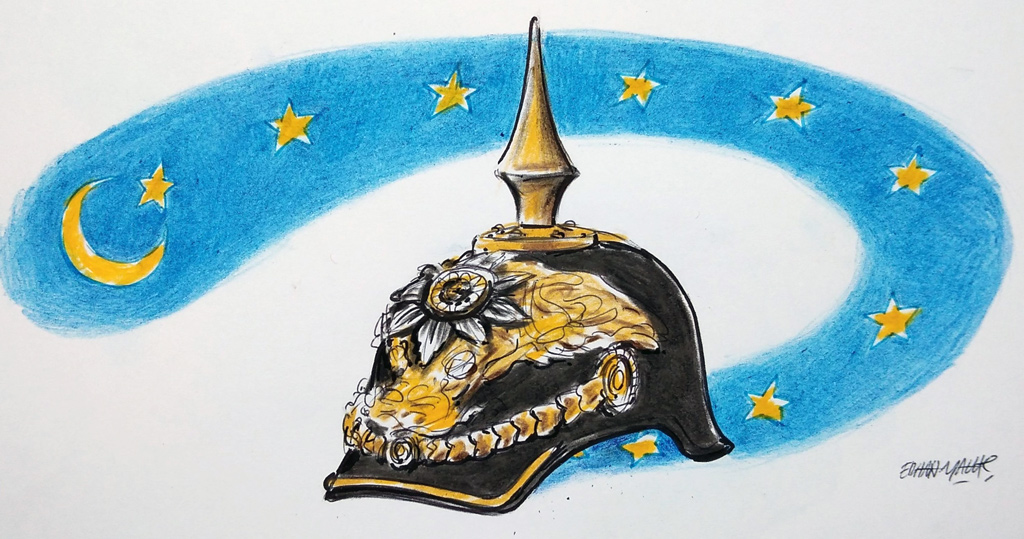 The Pickelhaube is a spiked helmet worn in the nineteenth and twentieth centuries by German military, | Illustration by Erhan Yalvaç.

For the future of the EU, German Chancellor Olaf Scholz is required to take bold actions, which can directly, or indirectly, impact Turkey's ties with the bloc as well

Erdoğan, who attaches great importance to leader-to-leader diplomacy, has been busy for two reasons. First, Turkey assumed a critical role in attempts to end the Ukraine crisis through diplomatic means. Secondly, Ankara’s policy of normalization, which has already led to a breakthrough with the United Arab Emirates (UAE), reached a new level with Israel and Greece as well. Nowadays, those two diplomatic initiatives reinforce each other to assign Turkey a more significant role in the international arena.

We have repeatedly said that the coronavirus pandemic was likely to deepen competition between great powers. The Russian occupation of Ukraine, the first manifestation of that development, sent shock waves through the world. The United States, the United Kingdom and the European Union isolated Russia so strongly that the aftershocks of that earthquake in great power politics left governments around the world deeply concerned. Whether Russian President Vladimir Putin’s revisionist move yields results or the Western alliance forces Moscow to take a step back, the international system is likely to experience fresh uncertainty and new tensions. If the Russian president gets his way, Eastern Europe and the Baltic states will feel the pressure (in addition to Central Asia, the Middle East and the Caucasus). If the Western alliance forces Russia to retreat, in turn, the U.S. should be expected to build on that accomplishment in its rivalry with China.

A new direction in sectors

The leaders who are aware of the geopolitical transformation underway seek a new direction in strategic sectors – including defense, raw materials, energy and food. The role that Turkey, whose importance was increasingly appreciated in Syria, Iraq and Libya, does and could play has exceeded the threshold of Western negligence. Obviously, it makes sense to communicate with the experienced leader in Ankara when it comes to the Ukraine crisis, which has a direct impact on Europe’s future.

But let me devote today’s column to an assessment of Scholz’s visit.

The headlines of the visit

First and foremost, the German leader is compelled by the power vacuum left in European politics by Germany’s former Chancellor Angela Merkel’s retirement. Despite his many attempts, French President Emmanuel Macron failed to perform well enough to address the continent’s long-standing problems. Indeed, Russia’s break with the West will impact German industry more than that of other European countries. Berlin’s dependence on Russian natural gas amounts to 49%. Germany, the EU’s economic powerhouse, needs a new and bold cooperation with Turkey to create fresh alternatives to Russian energy. In this sense, the Eastern Mediterranean captures the attention of shifting alliances.

Three countries play a critical role in shaping Europe’s future: Russia, the U.K. and Turkey. Having occupied Ukraine, Putin’s Russia came to be seen as an enemy of the continent. The severity of cultural and economic sanctions, too, signal that the plan for Russia’s integration with the West has been suspended for the foreseeable future.

Meanwhile, the U.K. assumed a dominant role in attempts to isolate Russia, thus involving itself in the future of Europe’s security architecture. Yet Germany cannot afford to hand over control of European politics or security to British or French initiatives. Hence Berlin’s decision to re-arm itself by allocating more than 2% of its revenue to defense expenditures. Although that decision did not receive a lot of attention amid the unfolding crisis in Ukraine, it represents a major change in the post-World War II status quo. Although Germany appears to be doing what the United States wants right now, the most recent developments also mean that the European security architecture will come under more and more German influence.

The Ukraine crisis has shown that containing and balancing out Russia are vital considerations for the EU. If the bloc cannot end the strategic blindness that haunts its relationship with Turkey, it should expect to be shaken by many more crises.

To sum up, Scholz happens to be a politician faced with making some bold and difficult decisions for the EU’s future.

The impact of Ukraine war on the Middle East
Previous

What will the new election bill bring for Turkey?
Next
Loading...
Loading...
We use cookies to ensure that we give you the best experience on our website. If you continue to use this site we will assume that you are happy with it.Ok