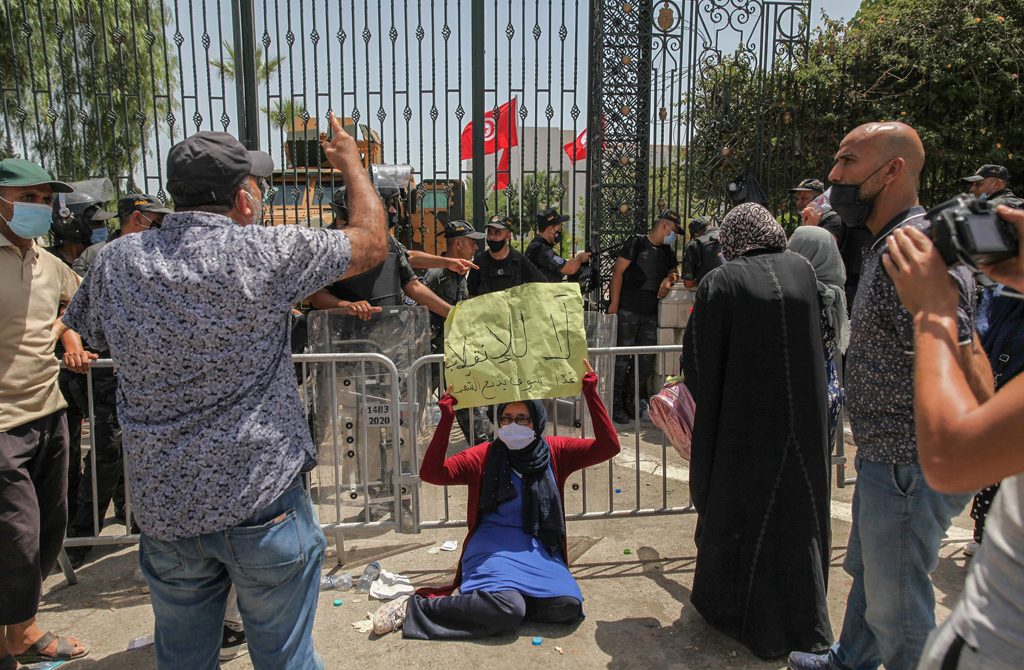 Tunisian President Kais Saied's dismissal of the country's prime minister was interpreted as a coup. The only way this process will not progress is if Saied gives constitutional power to the parliament

Tunisian President Kais Saied has removed the country’s prime minister, dismissed the government and suspended the parliament and immunity of its members. This has occurred in a country that was thought to be the only successful case of the Arab revolutions and the only surviving democracy in the Arab world. Saied’s decision, which has been taken as a coup and has been condemned by most observers, has led to one of the biggest political crises since the 2011 revolution. This is the first time an elected president has suspended the activities of all basic state institutions and undertaken all of the legislative, executive and judicial powers himself.

We have to focus on the timing of this decision. Many questions can be asked. Why did the president take this step and who motivated him to do so? First of all, the last protests against the pandemic conditions and the persistent economic problems in the country were misused by some domestic actors and their external supporters to overthrow the Ennahdha-supported coalition government.

That is true that there are serious political and economic problems; however, none of these necessitates the removal of the government and the suspension of the parliament. Therefore, it is easy to infer that the president and his allies in the bureaucracy have exploited the internal vulnerability in order to consolidate an authoritarian regime. Protesters mostly targeted the most popular political party, Ennahdha, and attacked its offices in different cities.

Second, the real target is not the prime minister and its cabinet, but Ennahdha itself. Parliament Speaker and the leader of the Ennahdha Movement Rached Ghannouchi denounced the president’s decision to oust the government, describing it as a “coup against the revolution and the constitution.” Then, he added that “the Tunisian people will defend the revolution.”

The polarization within the Tunisian elite, divided between conservatives and secularists, deepened after Ennahdha began sharing political power with some other political parties. While conservative Ennahdha is known as one of the most moderate Islamic movements in the Arab world, the secularists are known as the most radical.

When domestic and regional power circles tried to exclude Ennahdha from politics, the leader of the party Rached Ghannouchi denounced conservatism in order to reconcile with the secularist camp. After the assassination of a secular opposition leader and the ensuing street protests in 2013, Ennahdha ceded power to be replaced by a technocratic government.

Furthermore, the party and its leader pledged to keep Islamic law out of the new constitution and joined the secular camp in the first free presidential election in 2014, after which Beji Caid Essebsi became president. They even voted for Saied during the second round of the last presidential elections in 2019. However, in spite of all these reconciliation efforts, the secularist camp did not recognize Ennahdha’s power-sharing status.

The personality and political perspective of Rached Ghannouchi has shown that the problem is not the ideology of some political parties, but the functioning of democracy itself. Western powers and their regional proxies – i.e., the authoritarian political line represented by Saudi Arabia, the United Arab Emirates (UAE), Egypt of Sissi and the putschist warlord Gen. Khalifa Haftar in Libya – have been trying to prevent any democratic actor from coming to power or remaining in power.

The more authoritarian and despotic the regime in the Arab world, the more dependent the state will be on the Western countries or on some other external actors. In other words, it is quite difficult, if not impossible, to exploit democratic regimes. In the end, the West does not want independent and democratic regimes in the Middle East. The Algerian case in the 1990s and the Egyptian case in the 2010s have already demonstrated that Western countries generally support despotic and authoritarian regimes such as the Gulf monarchies.

Third, regional pro-status quo states such as the UAE, Saudi Arabia and Egypt have otherized and demonized mainstream Islamic social movements and political parties such as the Muslim Brotherhood and affiliated groups.

Therefore, these states have been trying to prevent mainstream Islamic groups from dominating the political domain in any regional state, which may set a “bad example” for their respective societies.

For the UAE and its regional allies, the mainstream political actors pose a bigger threat than any radical terrorist organization. In the end, they prefer radicals and despotic understandings, mostly representing Salafism such as al-Qaida, Daesh and the Taliban, to come to power in all regional states. Thus, they will use these radical groups as excuses and reasons for their interventions.

However, the educated and politically aware Tunisian elite will not be held hostage to some regional countries in the mid-term. In other words, it will be difficult to contain and direct the Tunisian elite for a long time. Some secular groups have already declared their opposition to the political coup.

There are three scenarios for the future of Tunisia. First, if Saied successfully holds all power in his hand, Tunisia will return to its pre-revolution state as a typical personalistic and authoritarian regime. However, whether Saied successfully returns to the old regime depends strictly on the support of the other political and bureaucratic actors and the societal support.

Considering the political awareness of the Tunisian elite, the reaction of secular domestic actors will play a critical role. It seems that the secular elite will be divided towards the new regime. While some will ask for political reforms and human rights, some others will prefer political stability and security over freedom.

Second, if Saied fails to secure a one-man regime, the country will enter into political instability and most likely into a civil war, which will cause the deaths of thousands of innocent people. The ultimate consequences of this option are widespread bloodshed, political chaos and economic poverty. The already vulnerable societal and political balance will collapse. The implications of a Tunisian civil war for the Middle East and North Africa (MENA) will be quite large.

Third, if Saied returns to normalcy and gives the constitutional power to the parliament and leads the formation of a new government, then the current political balance and functioning democracy will survive. This is the only option for the consolidation of Tunisian democracy. However, I doubt that the president will distribute the power in the near future. It seems Tunisia has entered a period of deep political and economic turmoil and it will remain dependent on other regional states and global powers for a while.

Ongoing stalemate in Cyprus only hurts the Turkish side
Previous

The populist coup in Tunisia
Next
Loading...
Loading...
We use cookies to ensure that we give you the best experience on our website. If you continue to use this site we will assume that you are happy with it.Ok