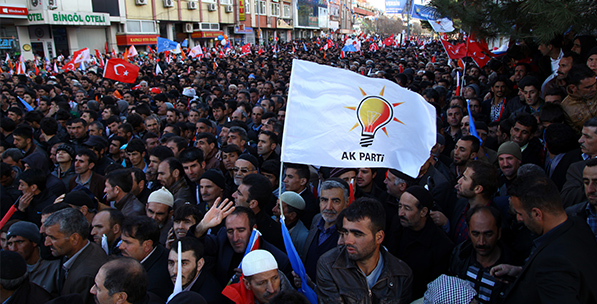 The Political Significance of Local Elections

The Dec. 17 operation transformed the local elections into a vote of confidence for the AK Party government. March 30 is no longer about municipalities and town councils but Mr. Erdoğan's political future

Millions of citizens will elect their mayors and local officials in approximately three weeks, on March 30. Traditionally, observers tend to attribute less importance to local races due to Turkey’s centralized government structure. As such, local elections represent a test of the public’s political inclinations and at most offer insights into parliamentary elections in the future – and this rule does not necessarily apply to all local elections. In recent history, two local elections were particularly relevant in this sense: In 1989, the elections signalled that the Motherland Party’s (ANAP) popular appeal was in decline while the 1994 local elections foreshadowed the Welfare Party’s (RP) rising popularity. Not surprisingly, ANAP lost the 1991 parliamentary elections as the RP secured a place in the coalition government following its success in 1995.

The upcoming local elections on March 30, too, bears importance due to its implications for Turkey’s presidential election in August and Prime Minister Recep Tayyip Erdoğan’s potential candidacy. To be sure, Mr. Erdoğan’s political future has been the main item on the country’s political agenda for quite some time now. The ongoing conversation will simply enter a new stage after the March elections.
The popular assumption that AK Party’s performance will influence Mr. Erdoğan’s decision to run for president paved the way for a comprehensive effort to discredit the government. This anti-government campaign, led by the Gülen Movement, rests on the core claim that Mr. Erdoğan and his government have been involved in corruption.

Simultaneously, the Republican People’s Party (CHP) redesigned its election campaign with a focus on corruption as the leftists nominated right-wing politicians in key districts to attract new voters. Throughout the election season, both the CHP and the Nationalist Movement Party (MHP) concentrated their efforts on discrediting Mr.Erdoğan while failing to promote their own plans and priorities. Although the upcoming elections consume most of the national leaders’ time nowadays, neither the politicians nor the people seem to pay attention to local candidates and their platforms.

Oddly enough, anti-government campaigns seem to have transformed the local elections into a vote of confidence for the prime minister and his party – which, paradoxically, works to the Erdoğan administration’s advantage. Having won approximately 10 points less in local elections compared to national elections over the past decade, the AK Party might presumably gain an advantage over its rivals as political parties attract voters’ attention at the expense of local candidates.

At this point, social groups who believe that extra-parliamentary forces are attempting to remove the prime minister from his office have united around him.

The extraordinary number of people attending Mr. Erdoğan’s rallies and various polling data seem to indicate that the AK Party consolidated its voter base thanks to controversial developments over the past months.

The March elections practically represent the first round of presidential race in Turkey as voters attribute an unusual amount of significance to the local elections.

As such, all analyses of election results will concentrate on whether or not the people mandated Mr. Erdoğan to run for president. To speak in more concrete terms, the AK Party will have to win 40 percent or more to secure a presidential nomination for the prime minister. Anything below that figure will inevitably spark an intense public debate on potential candidates.

Significance of the March 30 Elections in the Shadow of the Dec. 17 Operations
Previous

Elections and the Rise of Religious Discourse
Next
Loading...
Loading...
We use cookies to ensure that we give you the best experience on our website. If you continue to use this site we will assume that you are happy with it.Ok