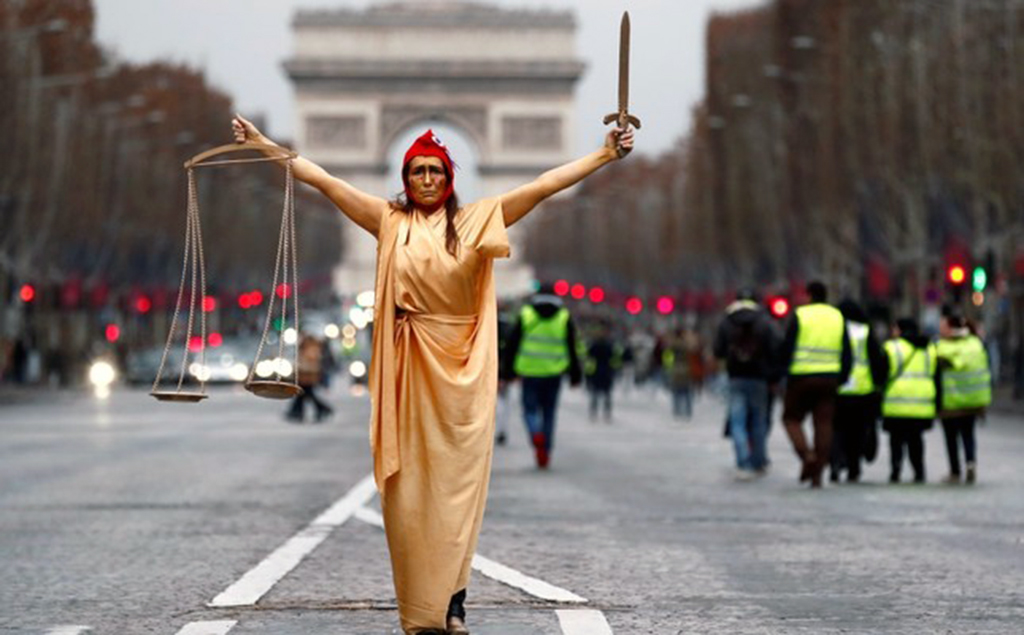 A woman dressed as "Marianne," a French symbol of justice, poses during a demonstration by the "yellow vests" movement at the Champs Elysees near the Arc de Triomphe, Paris, Dec. 22.

The genesis of a global illusion

It is true that a dramatic and still unclear transformation is taking place in the world. France is currently facing a mass street uprising not as commonly experienced with left wing activism but this time rightist slogans hit the streets..

It is true that a dramatic and still unclear transformation is taking place in the world. France is currently facing a mass street uprising not as commonly experienced with left wing activism but this time rightist slogans hit the streets. The strong right-wing activism in French cities is also becoming more radicalized day by day and feeding the roots of street activism at the same time.

For some time, populism has been a dangerous curse haunting the world and the European continent in particular, peaking at its highest level and making us feel as if we have been in a dream of political correctness for the sake of nothing for decades. Following Donald Trump’s presidential victory in 2016, a U.S. teacher tweeted that there is no need to be politically correct any more, and it seems she was right.

The term “politically correct” here, however, does not mean that the old, established order in the global system is going well while the rising wave of populism is the only responsible actor for the recent problems, such as anti-immigration campaigns, increasing racism and far-right movements. Contrary to this, it wouldn’t be unfair to say that the very old global system is the sole root cause of today’s existing problems, such as the presence of strong leaders, the failure of the political correctness and populism.

As a matter of fact, the years-long migration issue alone is the product of the old established order. In addition, it is safe to say that the “yellow vest” protests are known to be the revolt of the French middle class, who had been neglected by the government for a long time.

Yes, the world is facing a huge “neglecting” problem where the hegemon powers in the international system are deliberately ignoring the world’s actual crises, while the middle or lower powers aren’t allowed to have a say in global summits. The hegemon powers acting as if they let the weak ones express themselves in the gatherings is part of a big show and proves that the concept of democracy is just an illusion.

Once upon a time

Nevertheless, in the world of old democrats in the West, there were many bold redlines, from academia to media or diplomacy to human rights. These lines would generate a hierarchy of problems that provided the freedom for all to voice his/her objections. Yet, with the removal of these lines in today’s world, traumatic and disruptive problems have emerged, but they are just couple of decades long.

The migration exodus from sub-Saharan countries to Europe is not something new but has been present for almost 30 years. The subaltern and post-colonial studies, especially, have so far revealed thousands more similar topics, but they fell short of attracting the attention of the mainstream.

In addition, discussions on traditional diplomacy seem to sound negative to many; however, Trump damaging the tools of conventional diplomacy is making it a hot topic again. For example, while millions of people haven’t probably heard anything about the immigration problem on the U.S.-Mexican border, mainstream media regularly publishes news on the border dispute between the U.S. and Mexico and the construction of Trump’s famous wall against migrants. The very migrants, indeed, have been always there and what’s more, the states that do not want migrants are the actual responsible parties in the migration crisis.

Is social media a savior?

Another thing responsible for today’s political incorrectness is social media. It is individually targeting all of us for various intended purposes. However, according to some, social media has played the biggest role in revealing the world’s horrible secrets. Social media is actually a tool that enables the spread of news and reports not generated as part of the publishing industry, meaning not created by an editor or a correspondent, nor broadcast by traditional media outlets. Social media is a dreamland where anyone can feel like a producer, editor or publisher.

Here, encouraging the world’s vicious cycle, it serves to enhance the rate of consumption. As French philosopher Pierre Bourdieu defined in the first phase of the appearance of the internet, all of the free online services largely helped create consumer minds.

There is no doubt that the mission to mold consumer minds is now complete. As such, it is even more difficult to know what is and what is not an advertisement on the internet. All of us are accustomed to seeing our favorite YouTubers or internet phenomenon advertising a product in his/her videos. Even worse, every search and activity on Google comes back to us in the shape of subliminal messages like a boomerang. Even perusing free websites to watch your favorite sitcom or learn a recipe for delicious cupcakes inevitably leads to a bombardment of advertisements.

The reasons for all this mess on social media are not what Times magazine told us in its May 2018 edition with its article “Rise of the Strongmen.” Times, in the article “How Tough Guys Came to Rule the World,” used photos of President Recep Tayyip Erdoğan, Russian President Vladimir Putin, the Philippines’ Rodrigo Duterte and Hungarian Prime Minister Victor Orban as its front page photo and asked writer Ian Bremmer: “Why emulate the U.S. or European political systems, with all the checks and balances that prevent even the most determined leaders from taking on chronic problems, when one determined leader can offer a credible short cut to greater security and national pride?”

While the Times’ question shows the failure of the old established order in solving problems, it looked for the answer in the wrong place. I guess it is time to think about if the check and balance system that Bremmer talked about in the article ever even existed in the world to begin with.

The fifth anniversary of defending Turkish democracy against coups
Previous

The new road map in Syria
Next
Loading...
Loading...
We use cookies to ensure that we give you the best experience on our website. If you continue to use this site we will assume that you are happy with it.Ok