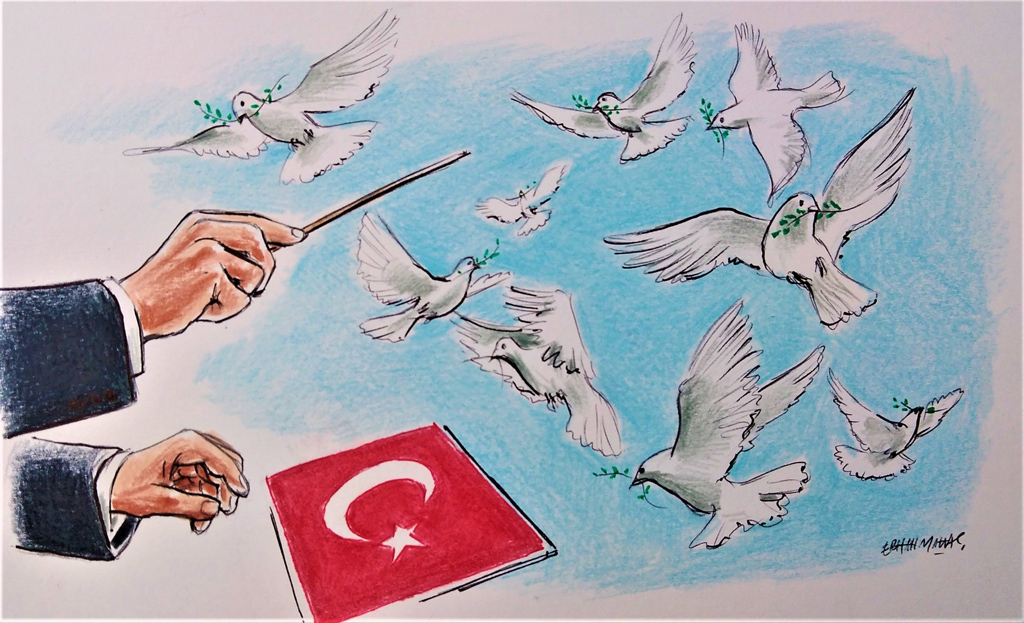 President Recep Tayyip Erdoğan made headlines around the world by successfully facilitating the creation of a 'grain corridor' in the Black Sea. Despite the Russian attack against the port of Odessa, the agreements signed in Istanbul last week are expected to be implemented.

President Recep Tayyip Erdoğan made headlines around the world by successfully facilitating the creation of a “grain corridor” in the Black Sea. Despite the Russian attack against the port of Odessa, the agreements signed in Istanbul last week are expected to be implemented.

Some commentators believe that the Russian attack was intended to signal that the war was not over. Others said it was a tactical move to confuse the Ukrainians. Either way, Moscow needs to present itself to the world as a negotiating power – not just a country at war. As such, despite delays and obstacles, the proper implementation of the grain deal serves the Russians as well.

It is no secret that Erdoğan’s exceptional role in the grain deal fueled jealousy in certain capitals like Paris and Berlin. Some questioned why French or German politicians could not play the role of mediator as effectively.

I noted in my previous column that Türkiye’s success was not a coincidence or the result of “walking a tightrope.” Instead, it is the result of a coherent policy rooted in the accurate interpretation of the new international atmosphere.

Nonetheless, I realize that some commentators, at home and abroad, find it difficult to make sense of Erdoğan’s foreign policy. Indeed, they have used many labels to describe it – from an “axis shift” by an “infuriating yet indispensable ally” to charges of opportunism, ideological expansionism, isolation and being flexible enough to sit at any table.

Ankara was accused of being part of “an alliance challenging the West” during the Tehran summit but was then praised just a couple of days later for helping create the grain corridor thanks to its balanced policy.

In recent years, Türkiye has steadily been an item on the agenda of foreign governments. Sometimes, the country attracts attention by insisting on normalization. Other times, it comes up as a result of escalations, including its conditional support for Sweden and Finland’s NATO membership, tensions with Greece and its commitment to conducting a military operation in northern Syria.

Speaking on Sunday at the graduation ceremony of Ibn Haldum University, where I serve as a faculty member, Erdoğan clearly explained Türkiye’s diplomatic approach and how it chooses to take initiative depending on the circumstances in this multipolar world: “Some of our friends say that they do not understand us. They say we fight as well as mediate, asking how that is possible. In truth, that is the key. The whole point is to make friends, not enemies … We have never disappointed those communities and nations, our friends and brethren, that trusted us by standing with them in difficult times. We compelled anyone that had adopted a hostile policy toward Türkiye to reconsider that policy and to look for ways to reconcile (with us). We demonstrated that we could preserve our regional and global relationships without making concessions regarding out political, economic and military interests.”

It is true that Türkiye experiences tensions with some countries because its national interests dictate it. However, under the right conditions and through mutual steps, normalization can be pursued because these conflicts do not have irreconcilable ideological roots – unlike what some believe.

At the same time, Ankara proved willing to take risks when those nations, with which it cooperates, experience difficulties. Türkiye’s bilateral relations with Libya, Azerbaijan and Qatar attest to that fact. As such, the Turks also show their adversaries that their friendship is quite valuable. Nor do they treat their adversaries as permanent enemies. For example, Türkiye manages to strike a balance between cooperation and competition with the United States, Russia and Iran. It can escalate tensions as well as compartmentalize even when it comes to serious security questions like Syria, PKK, its Syrian offshoot the YPG and the Gülenist Terror Group (FETÖ). As such, Türkiye competes with others and resorts to soft and hard power as needed, yet does not miss any opportunity to promote mutual interests when it presents itself. That is why the country has been able to normalize its relations with some others so quickly. Being on good terms with Ankara means having a strong relationship that one can count on in difficult times. Cooperation with Ankara is all the more valuable because it does not shy away from tensions when such action is necessary. Hence the inability of concepts like an axis shift, anti-Westernism, joining new alliances, expansionism or isolation to provide any insights into Türkiye’s current foreign policy. Erdoğan, in turn, is not “pro-Western” or “anti-Western” but is a ”native-national” politician.

Erdoğan and the failures of DEVA and Future Party
Next
Loading...
Loading...
We use cookies to ensure that we give you the best experience on our website. If you continue to use this site we will assume that you are happy with it.Ok