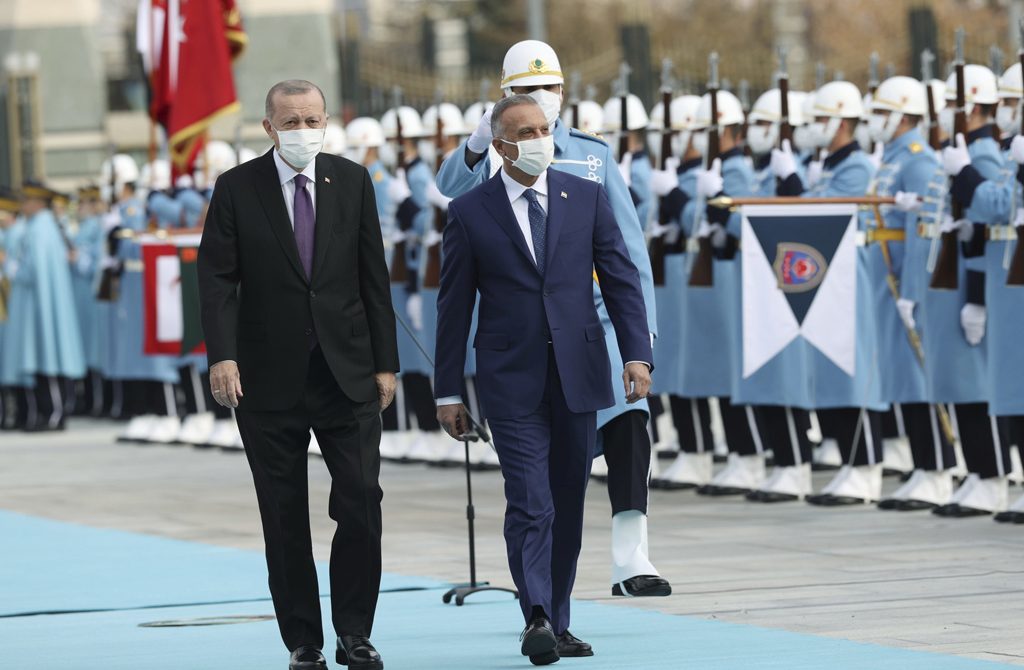 Sharing similar concerns in the region, Ankara and Baghdad have opened a new page in cooperation, which is particularly bad news for PKK terrorists

Turkish-Iraqi relations have generally been constructive due to close and comprehensive political, economic, trade, social and cultural ties. The two countries share a common history and many common bonds.

The bilateral relations, however, are not free of problems. For instance, the PKK issue and water-sharing have caused tensions between the two countries.

After coming to power, Iraqi Prime Minister Mustafa al-Kadhimi made his first official visit to Turkey on Dec. 17, upon the invitation of President Recep Tayyip Erdoğan.

It seems that Turkey will enjoy a more constructive relationship with the Kadhimi government because he maintained good relations with the Turkish authorities during his bureaucratic career.

First of all, Kadhimi is an experienced bureaucrat from the security sector who understands Turkey’s security concerns. Second, he wants to free his government from American and Iranian pressure as much as he can and wants to follow a more diversified and independent foreign policy. Third, unlike the previous governments, he has appointed a Turkmen as one of his ministers, as he believes they can play a bridging role in bilateral relations.

The Turkmen minister’s appointment and having Irshad Salihi, one of the most well-known Turkmen leaders, in his delegation was a clear message to Turkey.

Erdoğan and Kadhimi discussed many important issues during the visit. The most important among them was the struggle against the PKK’s presence in Iraqi territories.

Turkey’s main concern in its relations with Iraq is the existence of PKK forces in different parts of the Iraqi territories. Turkey wants to stop PKK attacks emanating from Iraq.

Turkey expects that the Kurdistan Regional Government (KRG) and Baghdad to reach an agreement and adopt a new policy to eradicate PKK forces, which are considered a source of violence and threat to the Iraqi people.

For Turkey, the PKK is a national security problem, and for Iraq, it is a problem of national sovereignty and political stability.

While Turkey tries to secure its border with Iraq, the Iraqi central government wants to get rid of all violent non-state actors within the state.

The existence of PKK in Iraq is a challenge for the central government, considering that besides the PKK, there are other violent groups, such as Daesh and Hashdi Shaabi (Popular Mobilization Forces), that claim territorial control.

In other words, without eliminating all these violent groups, the central government can’t achieve full control of its territory.

The second most significant issue was water-sharing between the two countries. Both sides attach great importance to the problem.

The water resources are limited and Turkey wants to manage the problem together with the Iraqi side. Therefore, Erdoğan had previously appointed former Forestry and Water Affairs Minister Veysel Eroğlu as Turkey’s special representative to work on the problem. Similarly, Kadhimi has also appointed a representative on the same issue.

The third significant subject discussed between the two leaders was the promotion of bilateral economic cooperation.

The two governments want to remove trade barriers, such as double taxation in Iraq, to increase the trade volume, from $15.8 billion in 2019 to at least $20 billion.

After liberating Iraqi territories from Daesh, the government has initiated a process of reconstruction. Turkey promised the highest amount of credit for the reconstruction of the state during the International Conference for the Reconstruction of Iraq organized in Kuwait.

The Iraqi state needs the Turkish companies that have many investment and infrastructure projects in Iraq.

In this context, a Turkish firm, Unıversal Acarsan Healthcare And Constructıon Limited Company has completed a 600-bed Imam Hasan al-Mujtaba Hospital in the Iraqi city of Karbala, and the hospital was handed over to the Iraqi health ministry. The same company has been building some other hospitals in other cities as well.

Therefore, the two governments want to open a border gate that connects Turkey directly to Baghdad.

The new border gate, which will also allow expansion of the bilateral trade volume, will make a great contribution to the security of both countries.

All in all, Turkey and Iraq are two interdependent neighboring countries, and they need one another. Turkey prefers political stability in Iraq, which it knows helps the Iraqi government not only to remove PKK from its territories but also to prevent possible Iranian and U.S. intervention into Iraqi domestic affairs.

Turkey wants to participate in the reconstruction efforts and thus increase trade volume with Iraq.

Similarly, Turkey will contribute to the diversification of Iraqi foreign policy and reconstruction of the state.

Turkey: Sanctioned by the US, praised by Russia
Previous

Arab Spring: A flashback to past 10 years
Next
Loading...
Loading...
We use cookies to ensure that we give you the best experience on our website. If you continue to use this site we will assume that you are happy with it.Ok