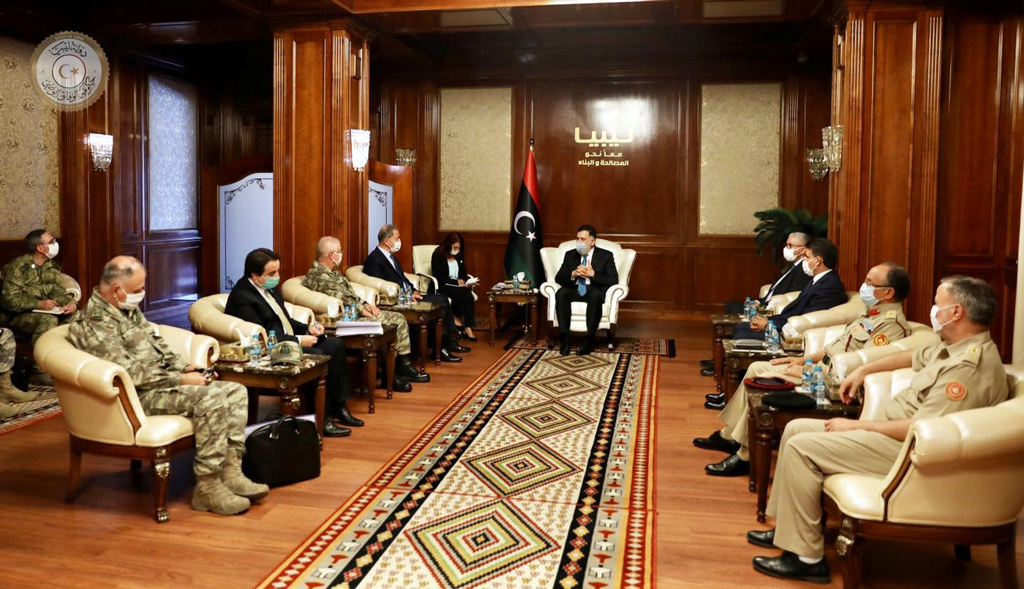 President Recep Tayyip Erdoğan told reporters Friday that his administration was keeping a close eye on the Libya situation. He referred to increased diplomatic contacts between Turkey and Libya, including Defense Minister Hulusi Akar and top military commander Yaşar Güler’s recent visits to Tripoli, as "shadow marking." Erdoğan stressed that those visits took place "as part of a certain plan."

President Recep Tayyip Erdoğan told reporters Friday that his administration was keeping a close eye on the Libya situation. He referred to increased diplomatic contacts between Turkey and Libya, including Defense Minister Hulusi Akar and top military commander Yaşar Güler’s recent visits to Tripoli, as “shadow marking.” Erdoğan stressed that those visits took place “as part of a certain plan.”

Sources say regional developments, including the situation in Libya, also came up in the Turkish president’s meetings in Qatar last week. Increased diplomatic contacts between Tripoli, Ankara and Doha suggest that Turkey and Libya have been working more closely in a broad range of areas since concluding a series of treaties in November 2019.

Having integrated its Libya initiative into the broader defense of Turkish interests in the Eastern Mediterranean, Ankara’s support for Tripoli is no short-term commitment. It covers a range of areas, including coordination between military units on the front lines, building civilian infrastructure, security sector reform, political transition and the rebuilding of public institutions.

Just like Turkey considers its fight against the PKK terrorist group in Syria and Iraq an existential matter for its neighbors, the country considers Libya its maritime neighbor. The two memoranda of understanding (MoUs) between Ankara and Tripoli indicate that Turkey has made a strategic choice to protect its vital interests in the Eastern Mediterranean, Europe and North Africa. In this regard, what Erdoğan describes as shadow marking is about the next decade or two of bilateral relations.

To be clear, Turkey is not the only country to monitor the situation in Libya closely. France, Greece, Russia and the United Arab Emirates (UAE), to name a few, have been extremely active in diplomatic and military terms. Fearing that the warlord Khalifa Haftar’s defeat will place at risk its interests in North Africa, France has been attacking Turkey’s Libya initiative. In the wake of a June 10 confrontation between Turkish and French frigates, Paris moved from criticizing Turkey’s “dangerous game” to charging Ankara with “criminal responsibility.”

Turkey’s determination led France to temporarily pull out of Sea Guardian, a NATO operation in the Mediterranean. President Emmanuel Macron, who fears that France’s influence over its former colonies will weaken, now attempts to mobilize NATO and the European Union against Ankara and wants to get Brussels to “sanction” the Turks.

Still, France, which conveniently ignores the UAE’s delivery of weapons to Haftar’s militias, remains unlikely to stop Turkey from assisting Libya’s legitimate Government of National Accord (GNA). Macron cannot get in the way of Turkish efforts in Libya by invoking his argument about NATO’s alleged “brain death” either – which he originally used to criticize Turkey’s actions in Syria. His claim that the terror threat facing Europe has escalated, too, is utterly baseless.

Greece, likewise, blames Turkey and prepares to reopen a consulate in Benghazi for the stated purpose of lending diplomatic support to Haftar’s militias.

Russia, another country that adopted the shadow marking approach, dispatched its ambassador to Libya in neighboring Tunisia. Meanwhile, the UAE launched a diplomatic counteroffensive against Turkey in Tunisia and Algeria, as it prepares to establish a military base in Mauritania.

In Libya, which happens to be on the crossroads of shadow marking and engagements from many countries, Turkey remains in the best position to make long-term contributions. To protect their interests, the relevant countries would best focus on exploring their shared interests with Ankara.

Decentralizing Libya not a panacea for stability
Previous

The meaning of the al-Watiya air base attack
Next
Loading...
Loading...
We use cookies to ensure that we give you the best experience on our website. If you continue to use this site we will assume that you are happy with it.Ok