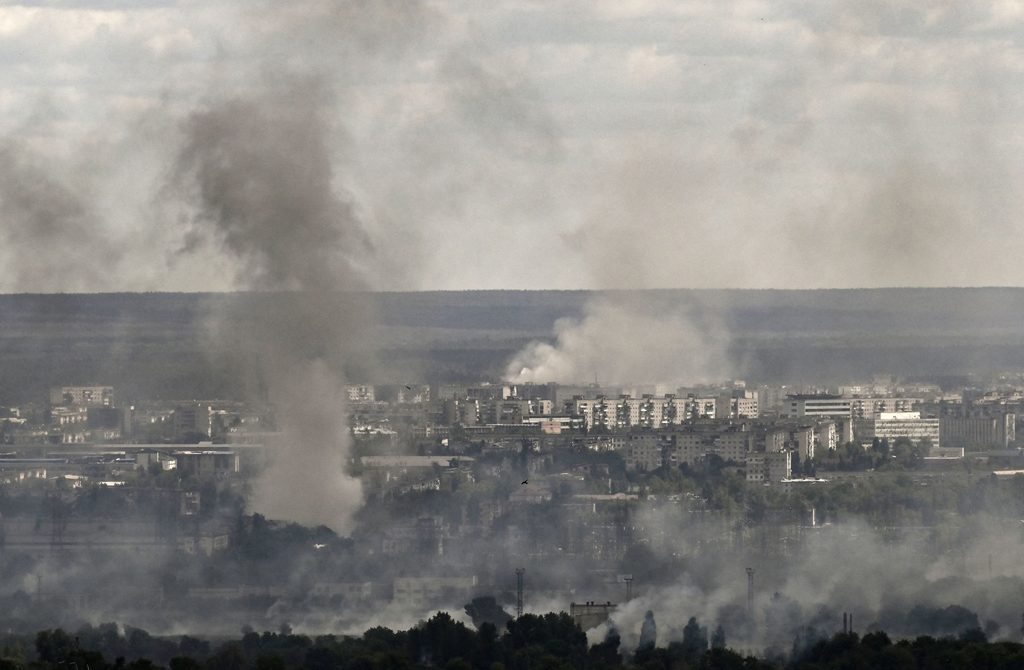 Smoke and dirt rise from shelling in the city of Severodonetsk during fight between Ukrainian and Russian troops in Donbass, Russia, June 7, 2022. (AFP Photo)

With the human and economic costs of the war now unbearable not just for the warring sides but for almost all states, many have begun to talk about reconciliation, especially their close trade partners.

More than 100 days have passed since the Ukrainian war started. Russia intended to take over Ukraine quickly and overthrow its legitimate government in favor of one loyal to Moscow. As the war took longer than expected and proved costlier, Russia failed to take the capital city Kyiv and pursue its goals. Then, Russia withdrew its forces from Kyiv and some other regions, concentrating its military in the Donbass region as was expected at the beginning of the crisis. After capturing the strategic city of Mariupol and connecting Donbass with the Crimean Peninsula, the Russian forces, together with Russian-backed separatists, have recently started to occupy the rest of the Donbass region, aiming to capture the Luhansk and Donetsk provinces in their entirety.

It has become clear that the West’s support is not enough for the Ukrainian state to drive the Russians out of the country. With the human and economic costs of the war now unbearable not just for the warring sides but for almost all states, many have begun to talk about reconciliation, especially their close trade partners.

The first country to call the two sides to reach a cease-fire and end the war was Turkey, which tried to mediate between the countries. President Recep Tayyip Erdoğan suggested that Russian President Vladimir Putin make “an honorable exit from Ukraine and end the war.” Erdoğan recognized that the longer the war, the more costly it will be not only for Ukraine but for many countries, including Turkey. Unfortunately, Western countries did not support Turkey’s position and therefore Ankara’s mediation did not bear fruit.

Since Western countries believe Ukraine can win the war and that the only thing able to deter Putin from continuing the offensive is a military defeat, they convinced the Ukrainian government to continue fighting. This has led the warring sides and their supporters to a deadlock. On one hand, in spite of substantial Russian losses in terms of manpower, equipment and economy, Putin is determined to continue the war until he gains certain parts of the country. It seems that no matter how long it takes, Putin will keep fighting until he achieves his objectives. On the other hand, it seems that Ukraine’s Western partners do not care very much about the country’s territorial integrity or its human and economic losses. Western countries have been instrumentalizing the war in Ukraine in their struggle against Russia and have been trying to inflict as much damage to the Russian forces as possible.

When asked whether Ukraine should concede some of its territory to Russia to end the war and bring peace to the region, U.S. President Joe Biden said a negotiated settlement will be necessary to end Russia’s war in Ukraine. Although Biden claimed that the U.S. will not make any decisions on Ukraine’s behalf, it is not clear whether the Ukrainian state can influence the position of its Western partners. One thing is clear, the Western countries have not delivered all the weapons demanded by the Ukrainian government. In other words, Western countries have begun to realize that it is not realistic to expect a Russian defeat in Ukraine and are advising the Ukrainian government to reinitiate negotiations.

It becomes obvious that no state wants the war to expand into other countries. Therefore, there is no option but to call for the war to end. The two warring sides must reach a reconciliation. On one end, considering the explanations coming from Biden and French President Emmanuel Macron, Western countries have begun to discuss this issue publicly. On the other, these countries will continue to provide weapons to Ukraine to prevent a Ukrainian defeat and ensure a strong hand at the negotiation table. We will wait and see how things will evolve.

An ideological showdown over the Gezi riots
Next
Loading...
Loading...
We use cookies to ensure that we give you the best experience on our website. If you continue to use this site we will assume that you are happy with it.Ok