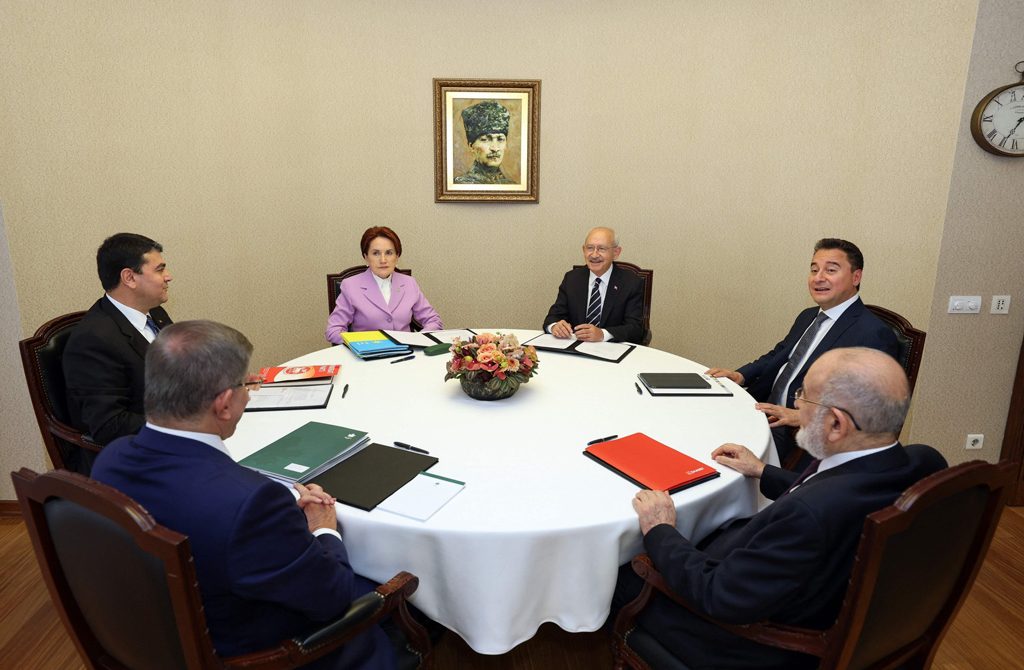 Previous discrepancies in ‘table for six’ persist, new one added

Under the circumstances, the opposition bloc has no choice but to settle all three disputes successfully.

President Recep Tayyip Erdoğan kicked off his reelection campaign with the main theme of “Türkiye’s Century” – which will focus on the ruling Justice and Development Party’s (AK Party) achievements over the last 20 years and what the movement intends to do in the Republic’s second century. For the next eight months, Erdoğan will seek to inspire voters with an inclusive rhetoric and by stressing that Türkiye, which has completed its infrastructure revolution, is on the brink of a major takeoff.

The People’s Alliance recently took a series of precautions to stop the rising cost of living and launched a long-term election campaign – which left the opposition worried. In recent weeks, the Good Party (IP) Chairperson Meral Akşener publicly rejected the imposition of Kemal Kılıçdaroğlu, who chairs the Republican People’s Party (CHP), as the opposition bloc’s joint presidential candidate by saying that the “table for six” is not a rubber stamp. That fueled a debate over the possibility of the opposition bloc’s dissolution.

I repeatedly pointed out that the opposition parties were unlikely to part ways due to the damage that such a development would inflict on the relevant movements and their leaders. The opposition bloc’s mentors, too, issued a stern warning against turning over the metaphorical table to securitize the issue. Accordingly, they created a “survival” discourse by claiming that none of the opposition leaders or their parties would remain in place if Erdoğan were reelected. That those self-proclaimed advocates of democracy would engage in such radical acts of securitization, thus undermining the electorate’s trust in the ballot box, is certainly shocking.

The six opposition leaders met once again on Sunday and agreed to meet more frequently and to unveil their roadmap for the transition process and nine key policies. Yet, a three-way tug-of-war within the opposition bloc remains underway, as the six party chairs speak to the media through their representatives. Those contradictions, yet unresolved, have been managed until now. Still, they have a tendency to persist with their various manifestations.

Here’s a brief summary of those problem areas:

Against the backdrop of those three disputes, the main opposition leader Kılıçdaroğlu successfully put himself in the best position to clinch the nomination. In doing so, he found a way to block Akşener’s attempts to find another suitable candidate from the CHP ranks. In this sense, Kılıçdaroğlu finds himself in a position to either contest next year’s presidential election himself or to handpick the opposition’s joint presidential candidate.

Nonetheless, the CHP stands to suffer some damage if its chairperson cannot clinch the nomination after everything.

Meanwhile, DEVA and the Future Party seek to preserve whatever influence they have within the opposition bloc by focusing on the transition process. That’s because they think that they can address the disagreement over the joint presidential candidate through a power sharing agreement.

At the same time, the pro-CHP media outlets, which believe that those fringe parties have too much power and their chairs – former AK Party members – have failed to show sufficient remorse and to confess adequately, insist that the right-wing components of the “table for six” get in the way of leftist politics in an attempt to create a right-wing policy set.

Under the circumstances, the opposition bloc has no choice but to settle all three disputes successfully.

First, they need to pick a candidate that speaks to the entire opposition base and ensure that the electorate gets to know that person by election day. In this sense, the opposition must find a candidate that can withstand Erdoğan’s active leadership and keep the six opposition leaders (and HDP) happy.

Secondly, the opposition bloc needs to make policy choices in nine key areas, coherently and ambitiously, and in a way that will win over right-wing and leftist voters. For example, in the key area of foreign policy, the opposition leaders have only managed to say that the balance of power in the Aegean was shifting in Greece’s favor. Reaching an agreement on policy seems like an easy job. Yet the opposition bloc faces the risk of lacking vision, ambiguity and ineffectiveness – even if they shake hands on a plan. DEVA and the Future Party, which argue that the bloc should pick its candidate later and instead focus on the transition process and policy choices now, have already positioned themselves to sign off on the candidacy of Kılıçdaroğlu or another CHP member. At this point, Kılıçdaroğlu handpicking another member of his party would cause more problems within the CHP – notably due to Istanbul Mayor Ekrem Imamoğlu – than with the fringe parties.

The third issue relates to the contradiction between the Good Party and HDP. It seems that the “table for six” will have to face that challenge many more times over the next months.

Finally, an additional potential challenge will be the sense of belatedness among the opposition, since the People’s Alliance will have kicked off its election campaign well in advance.

Dangerous escalation in the Ukraine-Russia War after annexation
Previous

Experts Respond: The Upheaval in Iran | The Protests, Which Erupted Following Mahsa Amini’s Death in Detention, in Their Third Week
Next
Loading...
Loading...
We use cookies to ensure that we give you the best experience on our website. If you continue to use this site we will assume that you are happy with it.Ok