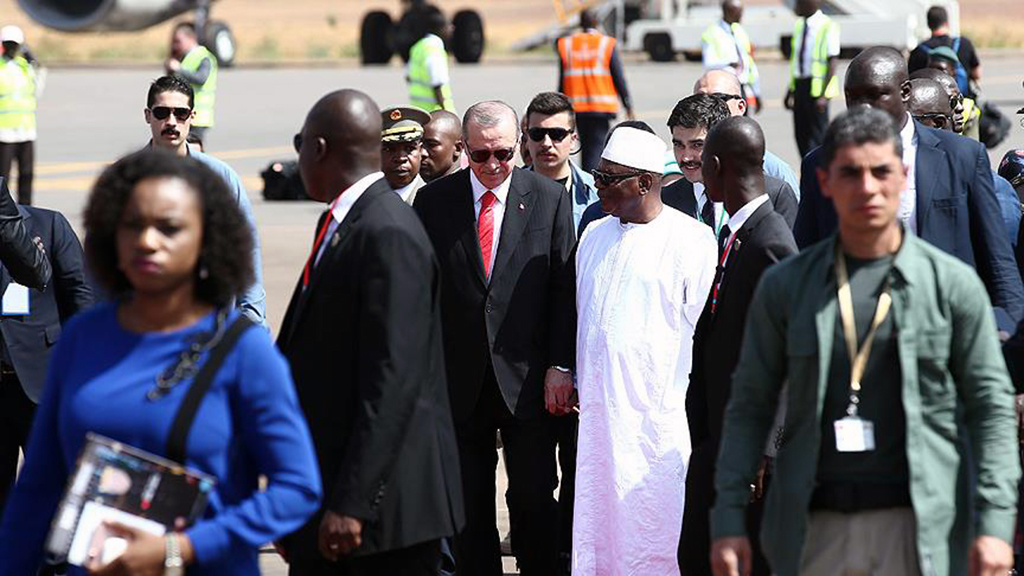 President Erdoğan does not just criticize Western countries, he also calls on them to reconsider their relations with the rest of the world on the basis of new partnerships

resident Recep Tayyip Erdoğan arrived in Dakar, Senegal, on Thursday before making his final stop in Mali and then returning to Turkey. The purpose of his trip has been to consolidate the country’s African opening. In doing so, he hopes to strengthen Turkey’s economic and strategic ties with various countries in the region. The establishment of a Strategic Partnership Council with Algeria is a case in point. Moreover, Erdoğan seeks to maximize the effectiveness of Turkey’s soft power instruments such as humanitarian and development aid programs and educational institutions within the broader framework of Ankara’s fight against the Gülenist Terror Group (FETÖ) led by Fetullah Gülen. However, Turkey’s moves are accompanied by a new political language that prioritizes the interests of these countries. In addition to stressing the importance of stability, security and commerce, the president said Turkey’s relationship with other countries must firmly rest on the principles of equality, justice and fairness.

Having accompanied the president on several official visits to Latin America and Africa, I saw something that came up again in Algeria, Mauritania and Senegal – Erdoğan’s statements on global politics are closely followed by politicians and ordinary people around the globe. His criticism of the Western-dominated international system and calls for an equal and fair relationship echoes in various parts of the world.

At the same time, his commitment to the question of Jerusalem’s legal status is welcomed in the countries he visits. It goes without saying that the Western media is desperately unsettled by vocal criticism from Erdoğan who is a leader who is willing to say that his country will go its own way if necessary.

To be clear, the president does not just criticize Western countries. He also calls on them to reconsider their relations with the rest of the world on the basis of new partnerships. It is therefore that certain groups, which would like to portray him as the next Muammar Gaddafi or Saddam Hussein, have been unsuccessful over the years. Still, the Western media continues to alienate Erdoğan on the pretext of criticizing the supposedly growing authoritarianism in Turkey.

Erdoğan does not seem to care about those claims and instead concentrates on what he knows to be right. He seeks to strengthen Turkey’s ties with its Western allies as well as Russia and Iran. At the same time, Turkey’s presence is growing in Africa, where great power competition continues in full force, which the governments there welcome.The warm welcome that he received in Mauritania was hardly the first. Thousands of women and men, young and old, were genuinely happy to see him. Older people left their homes to get a glimpse of the Turkish president as did young people attending Turkish schools in the country. Of course, we saw similar things in Sudan, Pakistan and Greece.

Speaking to a group of journalists in Algeria, Erdoğan talked about a range of issues, including the ongoing military operation in Afrin and domestic issues. He used an interesting metaphor when he reiterated Turkey’s commitment to fighting the People’s Protection Units (YPG) and to seize control of the Afrin city center: “You cannot leave the dragon half-dead. This must end one way or another.” This was indeed Erdoğan’s response to efforts by the U.S. and Germany to extend the U.N. Security Council’s cease-fire resolution to Afrin. There is no doubt that Erdoğan intends to go all the way in to Afrin. After all, he understands that the YPG presence in the area poses an existential threat to Turkey. Likewise, he knows too well that countries like Germany and the U.S., which show no regard for Ankara’s security concerns, will not change their minds because Ankara ask them nicely. U.S. officials claim that the relocation of thousands of YPG militants to Afrin to fight the Turkish military will undermine the fight against Daesh – the dragon they slayed. But they do not seem to care that another dragon that they fed with weapons and ammunition for years poses a threat to Turkey. Having talked to Western statesmen for 15 years, Erdoğan has apparently grown sick and tired of their unfair and selfish approach to global affairs. The bad news for the West is that every time Erdoğan travels to an African country, we all see that the non-Western world shares the same concerns as Turkey.

What did we learn from the Afrin operation?
Next
Loading...
Loading...
We use cookies to ensure that we give you the best experience on our website. If you continue to use this site we will assume that you are happy with it.Ok