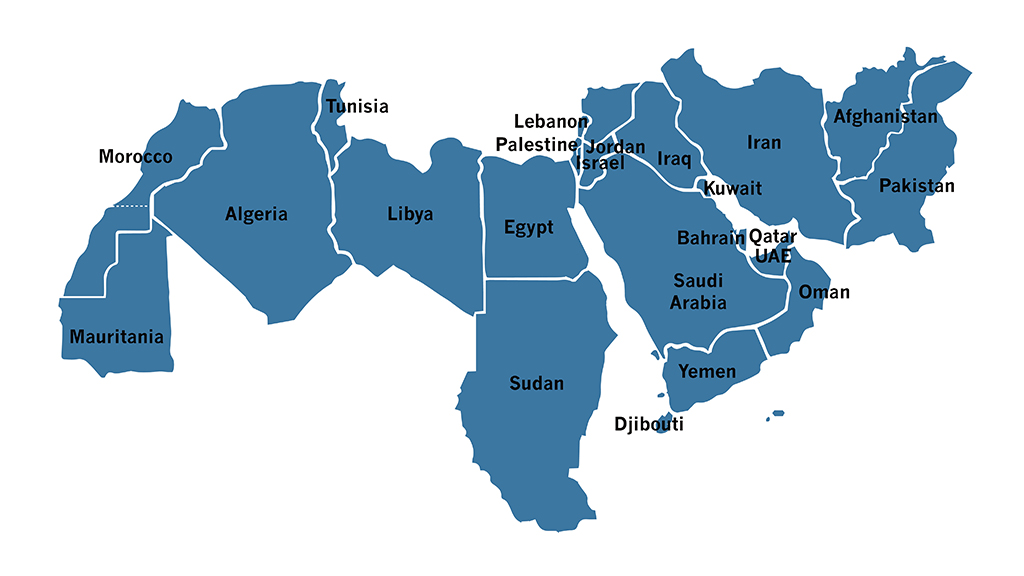 Map of the Middle East and North Africa (MENA) region

The Middle East and North Africa (MENA) region is going through a major structural transformation in the last decade. This transformation is closely related to the transformation of power balance in the global scene. The U.S. has already decided to reduce its military presence in the Middle East. This will be a continuing pattern unless an unexpected development or friction occurs in the region in the coming months. This is mainly related to the declining significance of the region for the next big global power struggle.

The new struggle is expected to be between China and the U.S. The economic dimension of this struggle has already started with the trade wars. For the time being both actors try to keep this struggle under control but if a broader confrontation occurs in Hong Kong, Taiwan or the South China Sea this may immediately escalate into a broader geopolitical confrontation. Nobody expects a full-scale war between the major powers any time soon but the tensions will lead conflicts in the proxies.

For both Washington and Beijing, keeping a manageable tension and keeping the proxy confrontations under control is currently the preferred strategy. They both want to keep Moscow on their side in case of a major geopolitical confrontation, that is why Moscow is experiencing one of its best periods in terms of regional expansion. Moscow is the primary beneficiary of the mounting tension between Washington and Beijing.

The power vacuum left by Washington in the Middle East and North Africa (MENA) region is gradually being filled by Russia. Russia also projects its power and influence on Eastern Europe. Major European actors and American allies in the Middle East feel sidelined and abandoned in this new situation.

Iran, Turkey and the UAE also try to take active roles in filling the power vacuum in the MENA region. They at least try to prevent the formation of a new balance against their long term interests. Iran uses its sectarian proxies and militia power in the region in this game.

The UAE tries to form alliances with Israel, Saudi Arabia and Egypt to form a larger alliance. Abu Dhabi uses its financial resources to lobby in Western capitals; to buy sophisticated weapons systems; to bribe some leaders in the Middle East states. Emirati officials also fund mercenaries from all over the region.

Bags full of dollars are the most influential weapon of the UAE, but this influence would be much limited unless UAE ambitions were not coordinated with Israeli and American interests. By its aggressive policies and ambitious steps, the Emirates also gain lots of enemies in the region.

Once the powerhouse of soft power in the region, Turkey and Qatar try to adapt to the new realities in the region. Turkey tries to increase its military capacity and technology and tries to reduce its dependency on its NATO allies because of Washington’s support for the PKK/YPG and the Gülenist Terror Group (FETÖ).

Unlike the early periods of the decade, Turkey’s attitude is more defensive than offensive. The U.S. Congress’ hostile step against Turkey alienated Ankara from Washington and pushes for alternative directions. The Turkish position is more on the defensive side of the equation mainly due to the ongoing crisis in Syria. Turkey does not want to be surrounded by enemies along its southern border as well as in the Eastern Mediterranean region. It seems that this new competition and power struggle will continue for a long time until it reaches a balanced power situation for the competing actors.

Actors like the United Arab Emirates, Saudi Arabia and Iran are playing larger games to fill the geopolitical vacuum in the region according to their interests. Despite their humiliating defeat in Yemen, Saudi Arabia and the UAE still continue their efforts to destabilize the region, risking the lives of millions of Libyan civilians. Iran’s overextension in Iraq, Lebanon, Syria and Yemen is creating lots of problems for Iran as well.

Once the strongest actor in all those capitals, the Iranian regimes Revolutionary Guards Corps (IRGC) and its sectarian proxies are protested everywhere in the region. Unaddressed conflicts such as Palestinian-Israeli Conflict; competition between Iran and Saudi Arabia; continuing instabilities in Iraq, Syria Lebanon, and Yemen are significant issues for a potential confrontation.

The current tension in the region is not a situational or a short term tension, it is rather a reflection of a structural transformation and will continue for a long period of time. All the significant actors in the region are trying to fill the power vacuum left by the U.S. All the actors pursue policies aiming to exclude or sideline their potential competitors which further raise tensions.

Some actors perceive the situation as an opportunity some others rather conceive the situation as a major risk. What is missing within this picture is the mechanisms of dialogue and tension reduction. Since none of the regional actors have the power and capacity to be hegemonic actors in the coming period it is better for the actors to work to form a platform to discuss their differences. The ongoing crisis in Libya or in Yemen may be an opportunity to start such a dialogue.