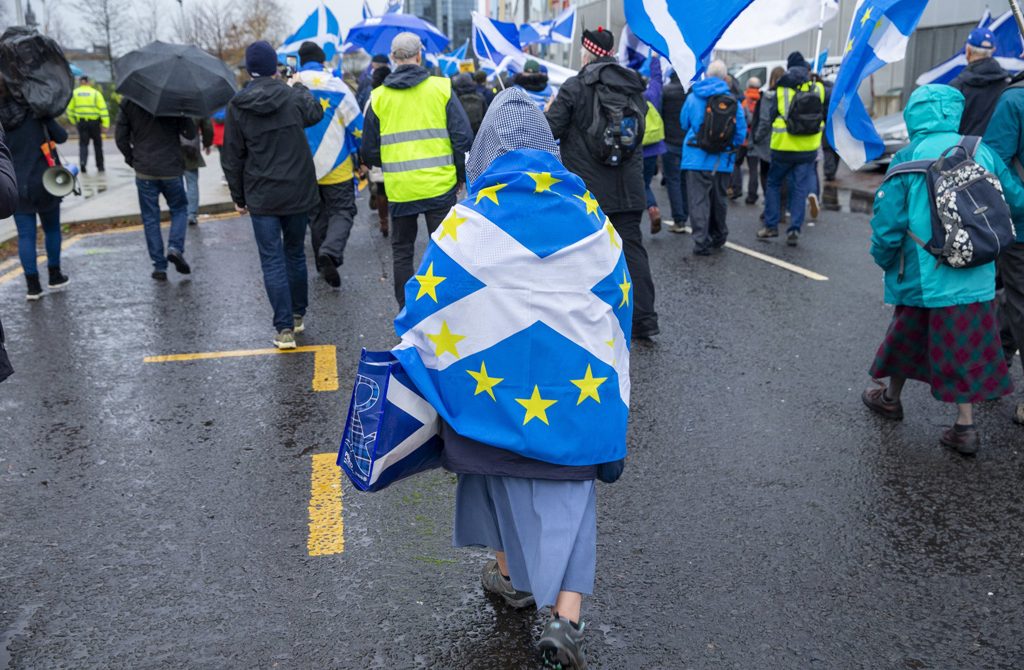 Members of the All Under One Banner (AUOB) group march through the streets of Glasgow to the HQ of BBC Scotland, demanding Independence for Scotland, Glasgow, Britain, Nov. 26, 2022. (EPA Photo)

It is now being discussed that the Scots can declare their independence unilaterally despite the fact that the approval of the U.K. Parliament is a mandatory requirement before Scotland is allowed to have a referendum

The independence demands of the Scots, who have been part of the United Kingdom since 1707, are on the agenda again. As a crucial turning point on the subject, 55% of Scots voted to stay in the U.K. in the independence referendum held in September 2014. Then British Prime Minister David Cameron’s proposal to give Scotland more autonomy and to reduce the tax burden on Scotland played an important role in the decision of the Scots contrary to the independence expectation.

Moreover, the fact that the U.K. was a member of the European Union at that time was the main reason that guided the Scots’ vote in the referendum. As a supporting fact of this manner, 62% of Scots were opposed to Brexit, unlike the Britons, in the EU referendum held in June 2016. Yet they could not get ahead of Brexit. Today, the separatists who argue that Scots voted to stay in the U.K. as an EU member state are demanding a second independence referendum, aka “indyref2.”

As an important point, it should be noted that due to legal regulations, the Scots need the permission of the U.K. Parliament to hold another referendum on independence since all matters relating to Scotland and England are reserved by Parliament under the 1998 Scotland Act. Indeed, the Supreme Court of the U.K., with its decision on Nov. 23, 2022, regarding the Scottish regional government’s request to hold an independence referendum on Oct. 19, 2023, held that a second referendum could not be held without the approval of Parliament. In other words, the approval of the British Parliament is mandatory for the Scots to be able to go to a referendum again. Frankly, this is a necessary arrangement in order to prevent the Scots (and others) from constantly holding referendums and to maintain internal stability in the country.

The Conservative Party, the Labour Party and the Liberal Democrat Party, which are the three largest parties in Parliament, completely opposed a new referendum. Likewise, the recently-elected British Prime Minister and leader of the Conservative Party Rishi Sunak, opposes a second referendum, just like his predecessors. Therefore, as long as the current political conditions do not change, an independent state does not appear on the horizon for the Scots.

The EU, to which the Scots attach great importance, opposes a possible separation without an agreement between the parties. As a matter of fact, the political elites of the EU, in their previous statements, emphasized that if Scotland is independent, the EU membership they have dreamed of would not be that easy. Therefore, the rationalist way for the Scots is to realize possible independence completely in accordance with the legal regulations. For this, they must first convince the Conservative Party, which holds the majority in Parliament. Otherwise, a new referendum decision will not be made by Parliament and the Scots will not be able hold a referendum again.

Also, many surveys conducted by various research companies throughout 2022 show that the overwhelming majority of Scots still favor staying in the U.K.

Therefore, contrary to the claims made by separatist Scots, the majority of people do not want independence from the U.K. In this respect, even if a referendum takes place in the near future and a similar result to 2014 occurs, the Scottish independence dream may come to an end.

On the other hand, after the decision on Nov. 23, Nicola Sturgeon, the Scottish Regional Government prime minister and the leader of the separatist Scottish National Party (SNP), described the next general election scheduled to be held no later than January 2025 as a de facto independence referendum. She also announced that a special SNP conference will be held next year to discuss and agree on the details of a proposed referendum. This shows that a group of Scots will insist on the independence demand. At this point, it is also being discussed that the Scots can declare their independence unilaterally.

However, this is not possible and rational because, as someone who followed the 2014 referendum in Edinburgh and Glasgow, I can say that the pro-secession Scots in general oppose such an independence. So the Scots are not as radical as the Catalans, who declared unilateral independence in 2017 but were then forced to back down after the intervention of the Spanish government. For this reason, if the pro-secession Scots take a risky step and make a unilateral declaration of independence, it is in question that London will intervene harshly. More specifically, such a risky decision could lead to violent clashes between London and Edinburgh, as happened between Madrid and Barcelona in 2017. Finally, in the event of such a unilateral separation, there seems to be no state that would take the U.K. against it and accept Scotland as an independent state.

World Cup 2022: Massive hypocrisy of the West toward Qatar
Next
Loading...
Loading...
We use cookies to ensure that we give you the best experience on our website. If you continue to use this site we will assume that you are happy with it.Ok