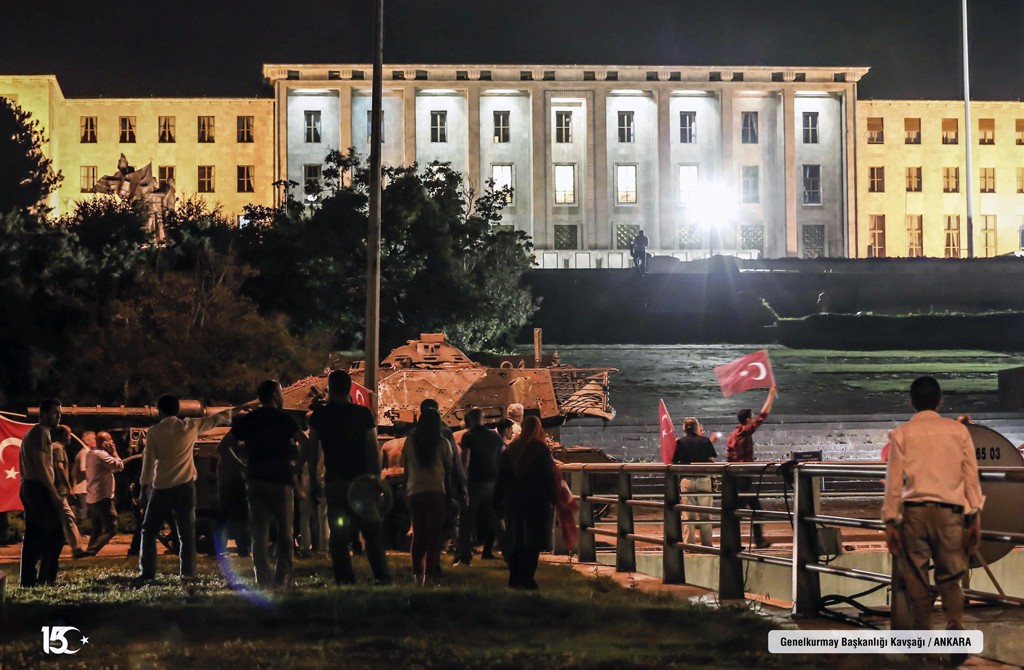 People walk toward the headquarters of the Turkish Armed Forces (TSK) as Gülenist coup plotters invade in the building during the night of the July 15 coup attempt, in the capital Ankara, Turkey, July 15, 2016. (AA Photo)

Gülenist infiltration of Turkish military: How and why

Taking advantage of an unstable political system and toxic civilian-military relations, FETÖ infiltrated the Turkish military and exploited what it could 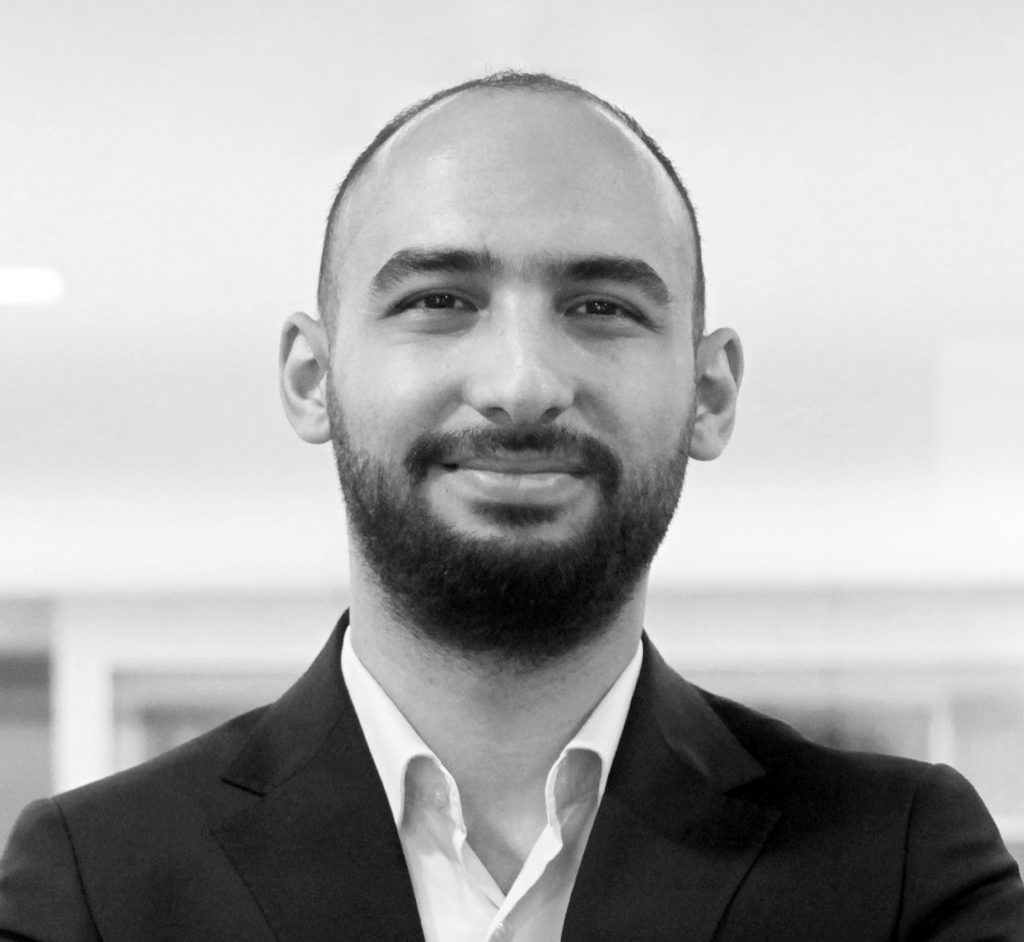 The July 15 coup attempt was one of the most tragic incidents in the history of the Republic of Turkey, and perhaps the world.

Unfortunately, coup d’etats are nothing new to Turkey. Military tutelage has been a chronic disease that has damaged Turkish democracy for many years.

Certainly, for all democratic states, the military is a crucial institution. However, the Turkish Armed Forces (TSK) extended influence beyond its legal bounds until quite recently in Turkey. This reality, which toxified civil-military relations, eventually presented deadly opportunities for the Gülenist Terror Group (FETÖ).

The organization realized that it could exploit the problematic nature of civil-military relations in Turkey for its secretive agenda. The truth discovered by the Gülenists was that the TSK was the most powerful actor in the Turkish political system, and for that reason, the military emerged as an essential target for the group.

Since the 1970s, FETÖ has lined the army with loyalists, inconspicuously placing them in key positions within the TSK. After its organization reached a certain level, it grew exponentially. Since the TSK was closed to civil democratic control, the actors who took over various decision-making mechanisms in the army were untouchable.

From the late 1990s and early 2000s, we witnessed FETÖ ironically promote a narrative of seeking to “fight against military tutelage and coups.” But this was not just a public relations campaign. At the same time, the space opened by the Justice and Development Party (AK Party) in order to eliminate this military tutelage was exploited to undermine rival cadres in the army. It is known now that this organization could exploit any and all democratic or religious value upon its whims.

The organization intensified its efforts in establishing an oligarchic-theocratic political order, first seizing the democratic state and then eliminating it after 2010. Having succeeded unimpeded, it then decided to make its final move.

FETÖ launched heavy blows using the judiciary and police but waited until July 15, 2016, to mobilize its armed militants, whose identities were previously under wraps. Thus, one finds an unusually Machiavellian terrorist group.

Four years after the coup attempt, the number of Gülenist soldiers expelled from the army stands at 20,077.

One hundred fifty of these carried the rank of general or admiral, which as of 2016 constituted half of the total number of high-ranking officers that made the organization’s most heinous attack possible. What organizational model did FETÖ follow, and how did it maintain itself? Setting aside the group’s malicious presuppositions and black propaganda work, this new and complex type of terrorism seems at first glance incomprehensible, especially for Western observers.

If we were talking about a state in which democratic institutions and rules were fully functioning and the rule of law was dominant, it would clearly be strange that a considerable portion of the army would attempt to carry out a coup upon the orders of a terrorist organization.

However, one of the two elements that made FETÖ’s journey to July 15, 2016, possible was the democratic deficiencies of the state, which did not uphold the rule of the law in the 1980s or in the following years when FETÖ started to establish itself within state institutions.

To put a finer point on it, we are talking about the unstable political system in Turkey, which is equipped with a mechanism of institutionalized military and civilian bureaucratic tutelage, away from the rule of law, political parties’ influence is limited by bureaucratic elites. This is the first factor that catalyzed FETÖ to expand its sphere of influence.

The second point is the unique organization style of FETÖ as a sui generis terrorist organization. We can express it precisely this way: If one seeks to understand FETÖ and its complicated TSK structure – and thereby the events of July 15 – one must first analyze the organization’s unique structure.

To achieve this and reach a correct conclusion, the starting point should be based on data sources obtained by the judicial authorities after long and meticulous examinations. Extensive judicial processes in the past four years have revealed tens of thousands of pages of indictments, case documents and reasoned judicial decisions. These judicial files contain witness statements, defense pleas and strong evidence that carry scientific precision.

Analyzing this vast amount of information, which supplies precious details about FETÖ, enables us to demystify many dark points regarding both this terrorist organization and its coup attempt.

The matter to be addressed above all in this context is FETÖ’s extraordinary organizational structure.

The organization is comprised of three main wings: civilian, educational and covertly armed. First of all of these is its public face, teamed with civilians who exploited legal institutions to hide the group’s secret agenda. The civilian structure works in a two-tier way and includes media, educational and financial institutions, as well as nongovernmental organizations (NGOs), such as charities and associations. These provide FETÖ with both the economic and social capital to achieve its aims. The group was legitimized by these institutions, which masked their terrorist acts.

The second tier of the civilian structure pertains to the management of the organization’s completely illegal activities. The organization is managed as a whole and its future strategy, macro-level policy and objectives are determined from the top. This civilian structure that exists throughout Turkey and across the globe meets “secret-operational” units for logistical needs in terms of accommodation, communications and finance, etc.

Meanwhile, the group’s educational unit is the key functional component. This structure provides the human resources needed by both the armed and civilian wings of the organization. Nonetheless, it is not right to view this as a usual militant supply. It is a complicated “ideal human-producing process” that goes far beyond recruiting ordinary TSK members into the organization.

This unit enables the formation of cell houses (known as “houses of divine light” in the group’s parlance) formed of dormitories present at prep schools and universities. These places are where the public-civilian front of the organization merges with its “secret” wings. The most prized target of the group, essentially, is the human mind, and this is where they can nurture supporters.

FETÖ has devoted its biggest amount of investment to education. It is in this context that the following expressions of Fetullah Gülen, the organization’s esoteric cult leader, should be gleaned. These appeared in indictments launched following a speech he made as early as June 1980.

“A break-out operation has been launched, but this operation will be put into practice in 35-40 years, this is not possible in today’s environment. In order for the break-out operation to be a success, we will open dormitory buildings for students to be trained in our own buildings and those that can be rented, with various books, and the publication of our own magazine, while a large portion of teachers in Turkey should be operating from our side,” he said in June 1980.

“I first recommend students become elementary or high school teachers, and secondly, officials, policemen or lawyers,” he said in a speech addressed to students in September 1984.

FETÖ draws its operational power from the elements of its units known as “secret services” in Gülenist terminology. These special units, which attribute to FETÖ an armed terrorist organization qualification, include the army, the police and the national intelligence, as well as the judiciary.

As is known, almost all terrorist groups’ leaders and influential figures arise from the armed forces. However, in FETÖ, the situation is the reverse. The soldiers in the Gülenist organization are positioned in “secret units” and are all considered “disciples” regardless of rank. As experienced on July 15, civilians take decisions at the strategic level, while soldiers simply execute orders and can only be involved in tactical decisions at best.

For example, a general who is a member of the group is ever-ready to receive instructions from a private school employee or civil servant. The content of such an order could often be to wiretap the chief of staff of the TSK on behalf of the organization, or even assassinate the president.

For some who lose their ability to question FETÖ, brought up in cell houses from a young age, what is essential is carrying out orders, whatever the orders may be. This is an important quality that distinguishes FETÖ from other terrorist organizations.

What happened on July 15 was that FETÖ activated this mechanism. In the light of judicial decisions, today, it is known that Adil Öksüz, the highest-ranking figure of the organization responsible for the TSK, activated the sleeper cells in the TSK in accordance with orders he received from Gülen.

While planning activities for the coup back in November 2015, it was discussed how the coup would be organized in meetings attended by senior civilian and military ringleaders in various cities leading up to July 15. In these meetings, superiority remained with the civilian “secret imams” and only tactical issues were discussed with military “students.”

At this point, the following question must be answered: How could Gülenist soldiers, who could not act on their own will, organize a coup attempt that required comprehensive organization? The answer must be found in the operation of the group’s secret units.

Based on experience gained over the decades, the organization acted with the principle of maximum secrecy in the military and compartmentalized.

FETÖ created a “clandestine cell network,” just like other terrorist groups, to sustain its infiltration project in the TSK. While FETÖ constructed “military/secret units” in cells, on the one hand, it separated these cells decisively on the other hand. Cells consist of generally one or several soldiers, and each cell is linked to a civilian who is referred to as the “secret imam” in organizational terms.

Therefore, an order received at the top could only be delivered to troops by following the relevant network chain. The relationship between the military and civilian imams assigned to them is akin to a lock and key.

A Gülenist soldier is in “sleeper cell” mode for as long as he receives no orders from his “secret imam.” However, when the imam in the key position contacts him, he becomes “active-operational.”

What Greece wants from Turkey
Next
Loading...
Loading...
We use cookies to ensure that we give you the best experience on our website. If you continue to use this site we will assume that you are happy with it.Ok