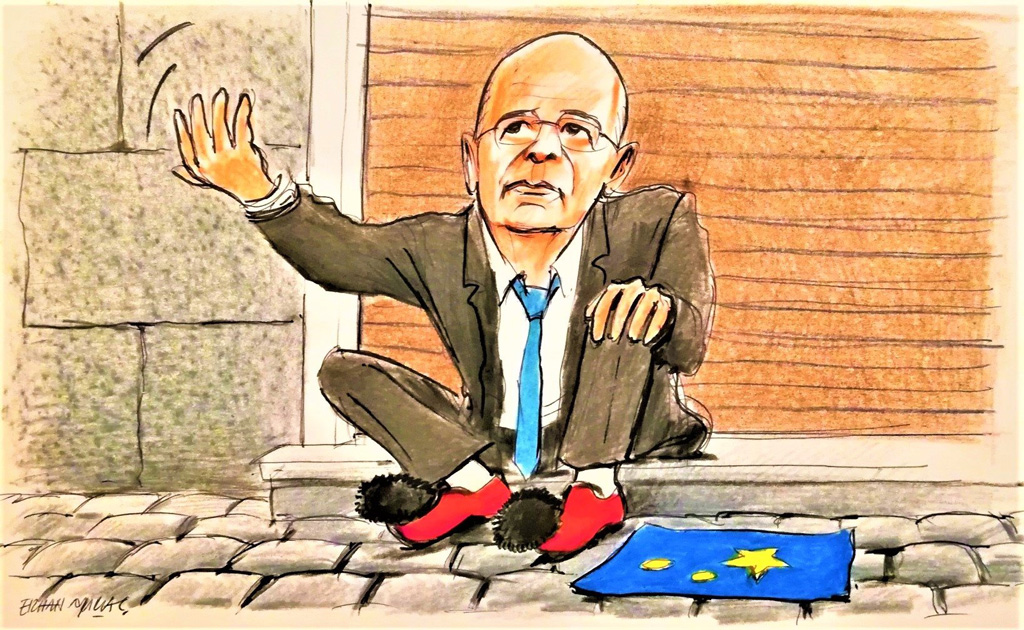 This illustration by Erhan Yalvaç satirically depicts Greek Foreign Minister Nikos Dendias begging for help besides a European Union flag after the Greek minister controversially threatened Turkey with possible EU sanctions despite there being no such implication from Brussels.

The Greek foreign minister’s populist behavior, an obvious attempt to impress nationalist voters at home, established, without a shadow of a doubt, which country was being unreasonable.

Among other things, Greece’s top diplomat accused the Turks of violating Greece’s right to sovereignty before threatening European Union sanctions. He accused Turkey of exploiting the refugee crisis, claimed that the Turkish-Libyan maritime delimitation agreement was illegal and demanded that Turkey reverse its decision to reinstate the Hagia Sophia as a mosque.

It is one thing to make such statements at the negotiating table or behind closed doors. The Greek foreign minister’s populist behavior, an obvious attempt to impress nationalist voters at home, established, without a shadow of a doubt, which country was being unreasonable.

The fact that Dendias threatened Ankara with EU sanctions, as if he was a spokesperson for the organization, was also disrespectful.

Çavuşoğlu naturally responded to his Greek counterpart’s accusations. In addition to rejecting that Turkey violated its neighbor’s sovereignty, he underlined that Ankara’s agreement with Tripoli had already been registered with the United Nations and added that the EU had no control when it comes to the issue.

President Recep Tayyip Erdoğan said that his foreign minister had put Dendias in his place. He added that the Greek government did not have the authority to appoint the chief mufti of Western Thrace under the Treaty of Lausanne.

The war of words between the Turkish and Greek foreign minister also covered the topics of the Eastern Mediterranean, the Turkish minority in Western Thrace, the remilitarization of the Aegean islands, and touched on disagreements about continental shelves and airspace.

In response to his guest’s insistence on bringing up the European Union, Çavuşoğlu delivered a derisive response: “We can only solve our problems as two countries. EU countries will merely sell weapons.”

But what would prompt Dendias to sabotage the seemingly productive process? Did he merely intend to deal a populist blow to his prime minister, Kyriakos Mitsotakis, to score political points at home?

That is certainly plausible, but the real issue is Greece’s unwillingness to discuss its bilateral problems with Turkey without the presence of third parties. This is because Athens wants to impose its maximalist demands on Ankara with the EU’s help.

Hence the Greek foreign minister’s arrogance and frequent references to the “carrot and stick” approach.

The Greeks assume that making their bilateral disagreements with Turkey a European issue will result in the country being threatened with sanctions. They assume that this will force Ankara to make concessions, but it is a futile play.

Why would the Turks, who have defended their national interests against Germany and France, bow to their neighbor’s cheap blackmail?

The Greek foreign minister’s act of provocation is directly related to his country’s concerns over the changing balance of power in the Eastern Mediterranean.

Germany and others, who appreciate Turkey’s strategic importance, encourage Athens to negotiate with Ankara.

At the same time, the Turkish attempt to make up with Egypt, and the possibility of rapprochement with Israel, undermines the anti-Turkish bloc that Greece thought presided over the Eastern Mediterranean.

Indeed, the Turkish involvement in the Eastern Mediterranean serves the interests of Libya, Egypt, Israel, Lebanon and Syria when it comes to the delimitation of maritime jurisdictions.

As such, Athens feels that its position has weakened in Brussels and the Eastern Mediterranean. Hence the Greek government’s panic and crankiness.

Such acts of provocation, however, will have no impact on the European Union against the backdrop of de-escalation efforts by Turkey.

Brussels clearly wants Athens and Ankara to keep talking. If anything, fueling tensions with the Turks won’t help Greece achieve anything. At the end of the day, its decision to buy so many Rafale fighter jets will only contribute to the French economy.

Moving forward, Turkey must both respond to Greece’s acts of provocation while remaining willing to continue talking. Time is on Ankara’s side, as the balance of power in the Eastern Mediterranean slowly shifts in its favor.

Is Washington closing its Afghan chapter for good?
Previous

Greece's dangerous playbook in Eastern Mediterranean
Next
Loading...
Loading...
We use cookies to ensure that we give you the best experience on our website. If you continue to use this site we will assume that you are happy with it.Ok