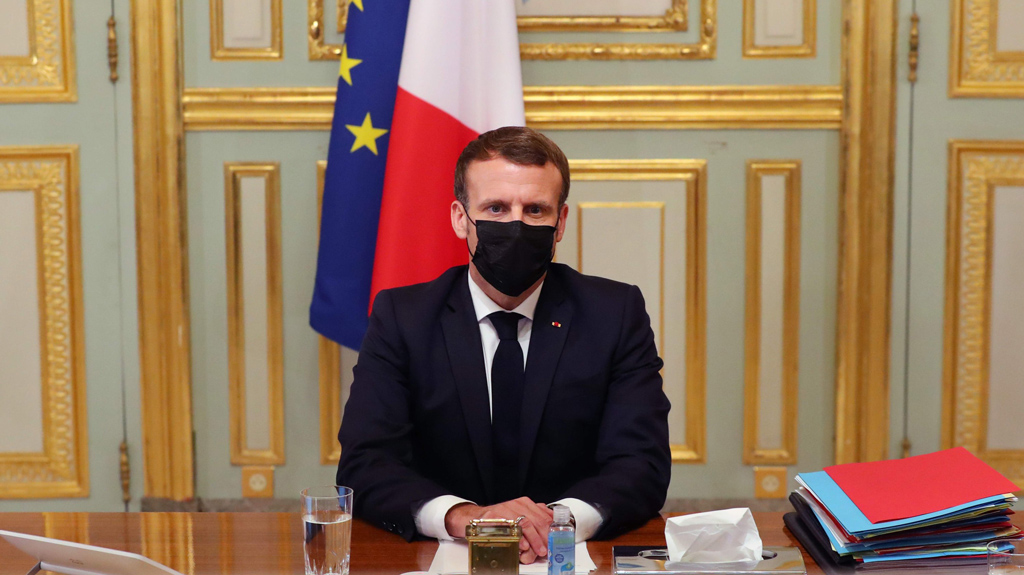 People trying to put labels on President Recep Tayyip Erdoğan’s strong reaction to French President Emmanuel Macron’s Islamophobic provocations make plenty of accusations – all part of a broader, ideologically charged campaign to distort the truth. Critics accuse Erdoğan of waging a "culture war" and contributing to the radicalization of Muslims by promoting an atmosphere of violence. Others question why the Turkish president seeks to write a new, anti-Western story.

People trying to put labels on President Recep Tayyip Erdoğan’s strong reaction to French President Emmanuel Macron’s Islamophobic provocations make plenty of accusations – all part of a broader, ideologically charged campaign to distort the truth. Critics accuse Erdoğan of waging a “culture war” and contributing to the radicalization of Muslims by promoting an atmosphere of violence. Others question why the Turkish president seeks to write a new, anti-Western story.

For the record, none of these questions need to be asked right now. That’s why their answers do not accurately reflect reality. After all, Erdoğan does not want Islamophobia, which has been on the rise in recent years, to evolve into a fresh wave of racism and hate crimes at the hands of the president of a major European country. Having worked for an alliance of civilizations and Turkey’s integration into the European Union, the Turkish leader knows that anti-Western sentiment will not benefit his country or Muslims around the world. He does not, however, refrain from highlighting injustices against Muslims in this Western-centric world order.

It is true that Erdoğan fights for a cause, but that cause is about defending the rights of the Turkish people and disempowered peoples around the world, hence the lack of provocation. He merely responds to Macron’s actions and calls him out. At the same time, Erdoğan has warned Europe, again and in no uncertain terms, of a further worsening of the situation there.

There is a difference between anti-Westernism and criticizing anti-Muslim practices and highlighting their discriminatory roots. Erdoğan’s narrative is about warning people against efforts by the powerful to deprive humanity of its opportunities for peaceful coexistence. To be clear, Erdoğan has the kind of track record necessary to issue such warnings. Here’s a quick recap.

Macron has been shutting down mosques, citing an alleged crisis of Islam; whereas Erdoğan has been issuing orders to repair churches and open them for worship.

The French president and his sidekick, Armenian Prime Minister Nikol Pashinian, have been bombing civilians and talking about a clash of civilizations. Erdoğan, in contrast, attended the funeral of Markar Esayan, a member of Turkey’s Armenian community and a Justice and Development Party (AK Party) parliamentarian, at an Armenian church and referred to him as his “comrade” – just as Pashinian kept talking about religion within the context of the Nagorno-Karabakh conflict.

That’s why a series of questions must be posed in response: Why did Macron endorse insulting depictions of the Prophet Muhammad and target mosques, imams and Erdoğan in the name of fighting “radical” Islam? Does he intend to forcibly radicalize European Muslims, hoping to kick them out, en masse, in the distant future? Are Macron’s attacks on the sacred values of Muslims a prelude to Europe’s new racist isolation? Does he systematically alienate Muslims to create a united fortress in Europe – as his ancestors did to the European Jews? Does Macron force people to look at depictions of the Prophet Muhammad in order to reform Islam by force? By the way, who tasked Macron with reforming Islam anyway? Does the French president really think that reviving the tradition of Jacobinism is the way to “enlighten” Muslims?

Macron made a huge mistake by endorsing those provocative cartoons in the name of freedom. If his government intends to fight terrorist groups like Daesh and al-Qaida, he’ll need to work with Muslim countries, starting with Turkey. Instead, he has become a poster boy for the anti-Islam campaign in Europe and took steps to fuel violence and bring France to the brink of civil war.

Macron strikes one as an arrogant European, determined to make American political scientist Samuel Huntington’s infamous “clash of civilizations” a reality. His conceptualization of “radical Islam,” too, is deeply problematic. Terrorism, in the name of Islam, is unacceptable. Violence has no religion, language, race or ethnicity. To claim Islam is radical based on the acts of terrorism by Daesh and others is unfair – just as white supremacists do not make Christianity radical or the terrorist organization PKK cannot be called a “secular-radical Kurdish identity.”

On the other hand, the Muslim world is indeed facing many crises. You can tell how deep those problems are by looking at Arab rulers, who auctioned off Jerusalem, bending over backward to justify Macron’s accusations.

The French president’s responsibility is to apologize for everything his country and the West did to fuel numerous crises since World War I. His job is to identify his own civilization’s weaknesses, which manifest themselves in the form of racism and Islamophobia, and look for ways to reverse those trends. But Macron does not get to dream about his nation’s colonial past or the white man’s burden.

The story of a Halloweeny election
Next
Loading...
Loading...
We use cookies to ensure that we give you the best experience on our website. If you continue to use this site we will assume that you are happy with it.Ok