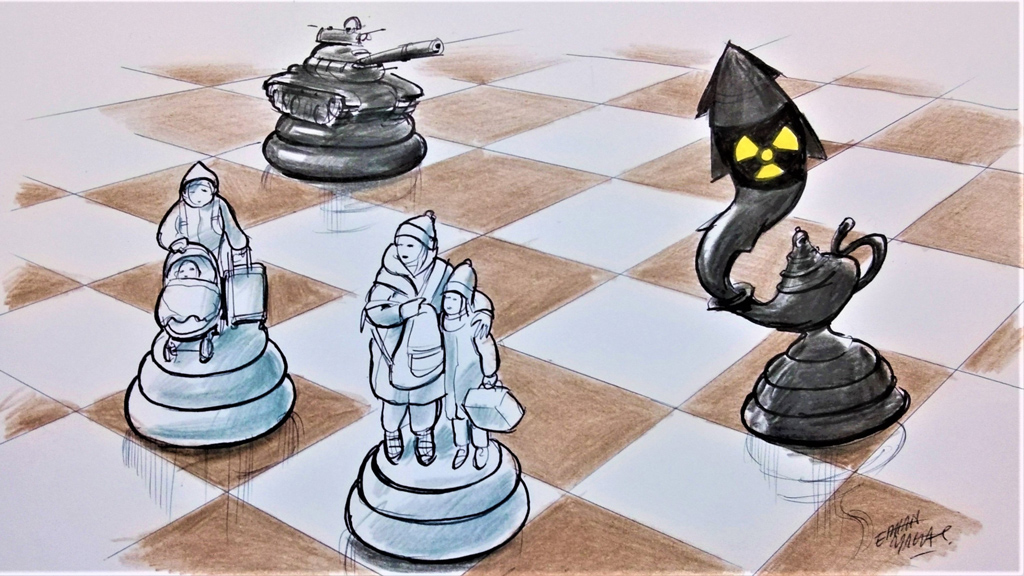 The Turkish government adopted a dynamic approach toward the Ukraine crisis. Its purpose is to shelter the country from the war’s repercussions and to contribute to a policy with the potential to promote peace.

On the 13th day of the occupation, Russia is preparing to tighten the blockade of Ukrainian cities, starting with the capital Kyiv. The cease-fire talks did not yield the results everyone was hoping for but the sides reached an understanding on “opening humanitarian corridors to Russia or Belarus.” Despite being targeted by severe economic sanctions, Russian President Vladimir Putin is not expected to stop without conquering the Ukrainian capital. Indeed, from his perspective, the “operation” continues as planned.

The question at hand no longer relates to Putin’s rational or irrational calculations. Putin has to sell his “victory” to the world and the Russian people. Whether he bought into United States President Joe Biden’s messaging – that Washington could live with a “partial occupation” – or was simply compelled to take military action, the Russian president has put his entire political career on the line. Obviously, what matters now is establishing humanitarian corridors. Yet, experts believe that Russia will carry out a heavy bombardment and there will be an uptick in urban violence following the evacuation of civilians from Ukraine’s occupied towns.

Highlighting the importance of the three-week mark, many observers express concern over the possibility of an uglier war. At the same time, we are hearing about alternative plans, including the formation of a “government in exile,” that would be implemented in case Kyiv falls. The two worst-case scenarios, in turn, involve Ukraine’s partitioning and the start of a prolonged civil war with Western backing. Still, the possibility of Putin, who has already talked about the nuclear option, taking his war to Eastern Europe would be a total nightmare.

The next Syria or Afghanistan

Unfortunately, Ukraine remains on the path to becoming Europe’s own Syria or Afghanistan. Nearly 2 million Ukrainians have already fled to neighboring countries. At the same time, there is a steady influx of weapons and volunteers from the U.S. and the European Union.

To prevent that war from causing more destruction, President Recep Tayyip Erdoğan had a one-hour-long phone conversation with Putin. He urged the Russian leader to declare a cease-fire and open humanitarian aid corridors without delay. As an extension of leader-to-leader diplomacy, the foreign ministers of Russia and Ukraine, Sergey Lavrov and Dmytro Kuleba, will be hosted by Turkey’s foreign minister, Mevlüt Çavuşoğlu, in Antalya today.

Due to the heavier-than-expected sanctions and the strong language of the U.S. and the EU, there is no country left to “pave the road to peace” (in Erdoğan’s words) between Russia and Ukraine. French President Emmanuel Macron has spoken with his Russian counterpart, yet France clearly lacks the ability to mediate. Instead, China, India, Israel and Turkey have been the more likely candidates for that role.

Erdoğan, who has repeatedly offered to mediate since the Ukraine crisis kicked off, could be trusted by both the Russian and Ukrainian presidents. As a nation that is being affected by the war, Turkey doesn’t want to lose either country. Ankara’s position is crystal clear: The Russian troops should withdraw from Ukraine and Ukraine’s independence and territorial integrity should be respected. It also continues its defense cooperation with Kyiv and supplies the Ukrainians with armed drones. Turkey has also closed its straits to Russian and Ukrainian warships.

However, Ankara has not joined the effort to completely isolate Moscow through sanctions and Putin’s demonization. Instead, the Turkish government aimed to remain in a position to maintain some level of confidence with Moscow and Kyiv simultaneously. It goes without saying that Turkey’s current role serves all parties – Russia, Ukraine, NATO, the U.S. and the EU – by creating a way out of the current crisis.

The opposition’s push to jump on the sanctions bandwagon, by contrast, is out of touch with reality. The main opposition Republican People’s Party (CHP) and the Good Party (IP) have been criticizing Erdoğan with reference to Putin and drawing parallels between Turkey’s business community and the oligarchs – a textbook example of cheap populism. It is deeply saddening that the opposition limits itself to such shallow interpretations, as the Russian invasion reminds the West of Turkey’s strategic importance. It is certainly a key problem that the opposition cannot appreciate how the world changes, while great power competition undergoes a new geopolitical rupture.

The Turkish government adopted a dynamic approach toward the Ukraine crisis. Its purpose is to shelter the country from the war’s repercussions and to contribute to a policy with the potential to promote peace. Interestingly enough, Ukraine, Russia and the Western alliance seem to appreciate the Turkish position much better than Turkey’s opposition parties.

Depending on the future course of the crisis, however, Ankara could naturally end up having to make additional decisions.

In Ukraine: Europe loses, the US gains
Previous

An already unexpected situation in Russia-Ukraine war
Next
Loading...
Loading...
We use cookies to ensure that we give you the best experience on our website. If you continue to use this site we will assume that you are happy with it.Ok