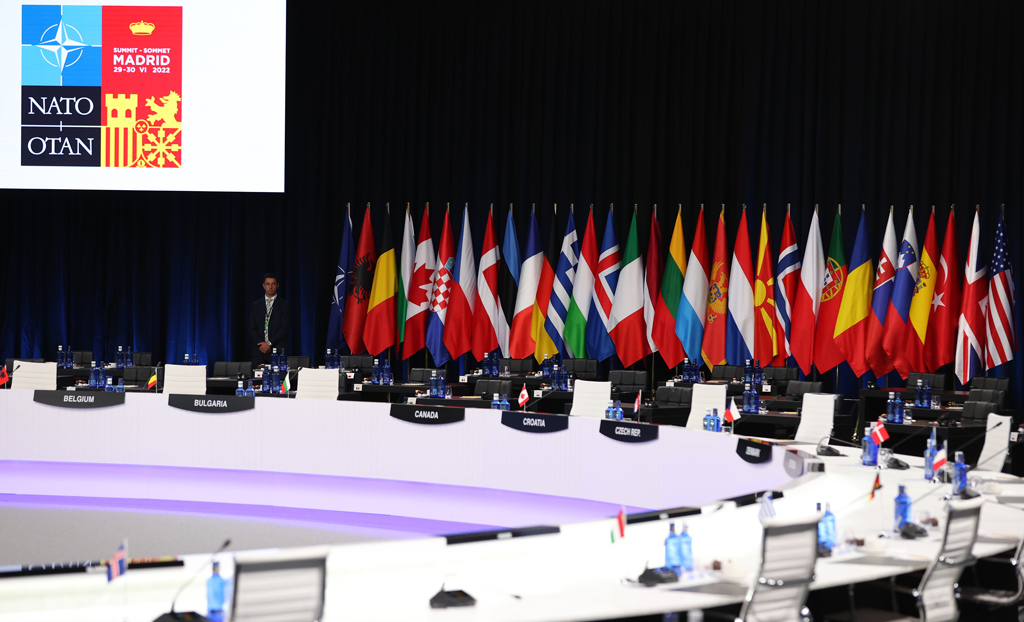 A view during the last day of the NATO Summit at the IFEMA Convention Center, in Madrid, Spain on June 30, 2022. (Photo: Dursun Aydemir / AA)

Crisis within the Western security structure

The Western world is in a deep political and social crisis due to the Western people losing faith in liberal institutions and values, obscurity around NATO's future and NATO losing its credibility

The West has been embroiled in a deep political and social crisis since the end of the Cold War and the collapse of the Soviet Union. The Western crisis began immediately after it declared its ultimate victory and global hegemony. The biggest challenge for the West does not come from Russia or China but from within. There are several structural and political reasons for this crisis.

First, the Western people and governments have lost faith in liberal institutions and liberal values, including multiculturalism and peaceful co-existence. They think liberal values and institutions do not serve their national interests anymore. The rise of xenophobia, ultra-nationalism, far-rightism, fascism, racism and Islamophobia have begun to shape the Western political discourse. Mainstream center-left (social democrats) and center-right (liberals) have lost power in favor of populist far-right and far-left political parties in most Western countries. The new normal in the West is shallow political leaders and partisan politics.

After the first generation of populist politicians, such as Silvio Berlusconi, former prime minister of Italy, and Nicolas Sarkozy, former French president, dominated the first decade of the 21st century, the second group of populist politicians, such as Donald Trump, former U.S. president, and Boris Johnson, former U.K. prime minister, rose during the second half of the second decade of the 21st century. Nowadays, the Western world is waiting for the third generation of populist and radical politicians who view world politics from a conflictual perspective. The momentum in the West is still negative and illiberal direction; the Western common denominators continue to weaken and disappear.

Second, the evolution and the future of NATO have been widely discussed at the heart of international politics. Several disputes between the United States and other NATO allies, namely continental European countries and Türkiye, have been rising for the last two decades. When the U.S. embarked on a controversial war in Iraq and illegally occupied the country, the majority of the Europeans and many European governments opposed the U.S. Even Germany, who in principle never questioned any American initiative abroad, openly criticized the U.S.’ invasion.

Furthermore, Greece, which illegally militarizes the Aegean islands close to Türkiye, has been trying to do anything in its capacity to provoke Ankara to increase the tension in the Eastern Mediterranean region. Greece has been insistently asking the Western countries to impose sanctions on Türkiye. Recently, the two countries came close to a naval confrontation in the region and the NATO members such as the U.S. and France have been sending military troops and warships to the region to support Greece. Since the U.S. does not act as a broker between the two allies, it has lost its neutral and effective position.

The more NATO expands, it will lose its common denominators. In other words, with the inclusion of new states with different priorities and agendas into the NATO alliance, the alliance’s cohesion will weaken. According to the NATO agreement, every ally possesses the right to veto any NATO decision if its demands are not met or if its national interests require otherwise. The most recent discussion about the possible membership of Sweden and Finland, which Türkiye questions, indicates the questionable future of NATO.

Souring relations among the NATO allies have been undermining the organization and its ability to make effective decisions and intervene into regional crises. Russia’s invasion of Ukraine has relatively reconsolidated the alliance, at least for the short term. However, after the prolonged war in Ukraine, the members of the alliance have begun to return to their previous positions and do not stand united against the crisis. Different members of the alliance have not only different priorities but also conflictual policies. For instance, many NATO members have been supporting and sponsoring anti-Turkish non-state actors and terrorist organizations, which undermine Türkiye’s national security. On the other hand, while many NATO members have supported Khalifa Haftar, the illegal military actor in the Libyan crisis, Türkiye has supported the U.N.-recognized government.

Third, NATO’s credibility eroded in the last two decades. The allies of the Western world, both Western and non-Western states, no longer trust the NATO alliance and the leading Western countries. For instance, neither NATO nor the Western states could save the Arab regimes during the Arab uprisings and revolutions or Georgia and Ukraine from the Russian intervention and disintegration. Even the Armenian government has criticized NATO for its inability to intervene in the crisis in the South Caucasus.

The Western NATO allies have different priorities; naturally, they do not consider the national security concerns of other states, including Türkiye, a NATO ally. Türkiye has been reminding the other NATO allies of the principle of reciprocity, which calls all members to respect the national security of the others. Unfortunately, this principle does not apply to the recent relations between Türkiye and some of the other NATO members since many NATO members remain indifferent to the threats directed against it. Despite all constructive steps on the side of Türkiye, some NATO members are determined to take a tougher stance against Türkiye.

Many direct or indirect developments related to European and Trans-Atlantic security require rethinking the future of NATO. All members have to think about the security concerns of other member states. Otherwise, these developments will lead to counterproductive relations between the member states. Clearly, if the NATO alliance and its most important member, the U.S., do not adopt a proactive approach to restructure the institution and rebuild relations among the members, the alliance, together with the U.S., will lose its global effectiveness.

Insisting on candidacy and 'future of the state'
Next
Loading...
Loading...
We use cookies to ensure that we give you the best experience on our website. If you continue to use this site we will assume that you are happy with it.Ok