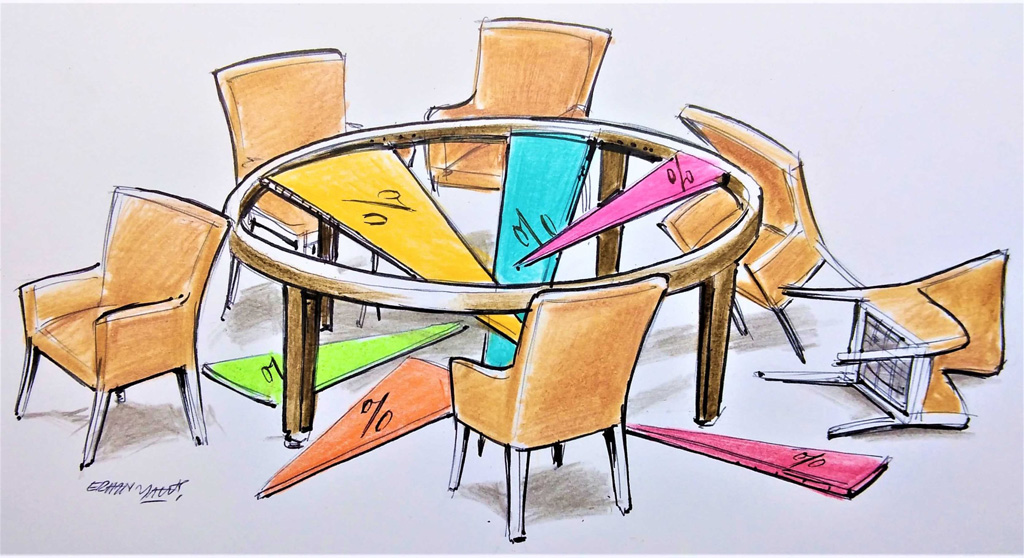 A roundtable of the pie-chart of the expected results in the election by the parties. | Illustration by Erhan Yalvaç.

Istanbul’s mayor, Ekrem Imamoğlu, spent Ramadan Bayram, also known as Eid al-Fitr, in the eastern Black Sea region aboard a municipal bus, which traveled there from Istanbul, together with a group of columnists – in what looked like an election campaign. In other words, Kılıçdaroğlu’s message for everyone to “clear his path” has not ended the competition. It seems that the competition between the CHP chairperson, the mayor of Istanbul and Mansur Yavaş, Ankara’s mayor, will continue with additional “salvos.”

Against the backdrop of that race within the main opposition party, the Good Party (IP) and the Democracy and Progress Party (DEVA) attempt to play a more prominent role in center-right politics. The opposition’s “table for six” has created an opportunity for those movements to try and lure away secular voters from the CHP. At this point, intra-alliance volatility appears to be inevitable. That same phenomenon does not represent a problem for the People’s Alliance, yet competition between potential candidates and volatility could be more critical for the six opposition parties. Consequently, the “table for six” looks increasingly incoherent to the electorate.

Tensions within the main opposition party give the IP and DEVA more room to maneuver, as the former’s chairperson, Meral Akşener, seeks to push her movement’s organization to the center-right in an attempt to gain more access to liberal-conservative voters.

DEVA Chairperson Ali Babacan, in turn, relies on rhetoric designed to distinguish his party from the rest of the opposition. Having announced that DEVA will contest the next election under its own banner, he claimed that Turkey had “no choice” but to accept supporting his party, complained that the “six (opposition) leaders saying different things does not reassure the people,” and recalled that “we did good things in 2002-2015, when I was the economy czar.”

Both DEVA and Ahmet Davutoğlu’s Future Party (GP) know that they cannot connect with the ruling Justice and Development Party (AK Party) base with the CHP’s discourse. It would be political suicide for Babacan and Davutoğlu not to take credit for their time in office. They are bound to debate which part of the AK Party’s rule was “good.”

For the record, Babacan’s most recent statements not only reflected his claim to know the economy, but also highlighted his experience in government – which distinguishes him from Kılıçdaroğlu and other opposition leaders. Davutoğlu could say similar things about his time as foreign minister and prime minister as well.

Those fresh approaches, however, could mean more chaos for the “table for six.” At the same time, DEVA and the IP compete over which movement knows more about the economy. Whereas privatization is a key issue for Babacan, Davutoğlu attaches importance to Syria and refugees. Neither could possibly persuade the CHP and the rest, which oppose the AK Party completely, in those areas. As such, the “table for six” increasingly looks like a platform that opposition leaders “support, question and use to issue warnings and deliver messages.”

The CHP, the IP and the Peoples’ Democratic Party (HDP) constantly criticize the AK Party’s 20 years in power. The normalization attempts in the international arena, too, have been the subject of criticism. Those movements, which used to ask why Turkey was having problems with the relevant nations in the first place, now accuse the government of lacking a coherent policy. They complain, as if to say that they should have repaired those relations after winning the election – a symptom of the condition from which the opposition has long suffered.

There is, however, a contingent within the opposition, whose criticism appears more problematic to me. Specifically, I refer to certain commentators, who currently mentor DEVA and GP and advised the AK Party in the past, that portray the normalization policy as “unprincipled.”

Those circles famously misinterpreted the post-Arab Spring regional realities for the AK Party. They now make that same mistake, using the same language as the CHP and the IP. Specifically, they tend to make the mistake of thinking of the nature of politics with “an excess of liberal assumptions.”

Turkey adopted a principled stance in opposing the military coup against then-President Mohammed Morsi in Egypt and demanding that those responsible for Jamal Khashoggi’s murder be brought to justice. It did much more than any Western country. Let us recall that France and Germany promptly rolled out the red carpet for the coup plotters at the time.

That principled stance, however, cannot disregard the reality. Long-term tensions in bilateral relations tend to cool down the relationship between peoples. Turkey called on everyone to respect the people’s decisions and criticized the coup plotters for that reason. It did not, however, adopt a policy of “democracy promotion” that involved meddling in the internal affairs of other nations.

The leaders of DEVA and the GP, which currently criticize the AK Party with the CHP’s talking points, directly contributed to Turkey’s Middle East policy, including the Syria policy from 2011 to 2015. In this sense, they had significant responsibilities at the time. Nonetheless, they apparently lack the courage to defend those policies against the main opposition party.

Is there a chance for sustainable cease-fire in Ukraine?
Previous

Ideological fight on refugees and their return
Next
Loading...
Loading...
We use cookies to ensure that we give you the best experience on our website. If you continue to use this site we will assume that you are happy with it.Ok