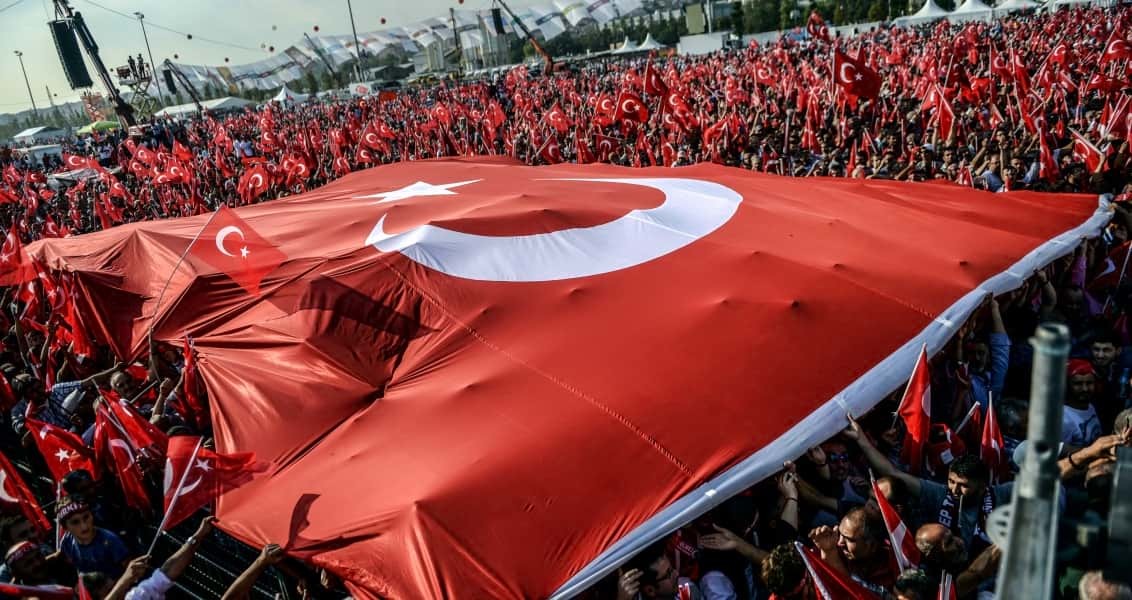 Collapse of Yenikapı Consensus, the Symbol of United Turkey?

The positive atmosphere following the Yenikapı rally against the July 15 coup attempt where all leading political party representatives and their supporters came from various political backgrounds, was a great opportunity for a better future in Turkey, yet the CHP leader unfortunately chose to stay out of this unity

Around a year ago, almost 5 million people gathered in Yenikapı, a large square in Istanbul, to protest the July 15 coup attempt and show their respect for democracy. Officially called the Democracy and Martyrs Rally, this event brought different political factions of Turkey together. As well as President Recep Tayyip Erdoğan, the leaders of three major political parties in Parliament and representatives of various nongovernmental organizations joined the event and made anti-coup and pro-democracy statements. This rally was seen as an opportunity to establish a new political consensus beyond daily party politics.

However, the political atmosphere in Turkey has changed since the rally and a consensus-based approach led by the “Yenikapı spirit” transformed into another dimension. Some actors that took part in the rally event, such as the main opposition Republican People’s Party (CHP), have changed their perspective and discourse on the coup attempt. This change led them to fall outside the Yenikapı spirit and narrowed the borders of consensus. To understand the changing dynamics of the Yenikapı consensus, it is important to evaluate what has happened in the year since the rally.

TOWARD AN IMPORTANT CONSENSUS

On the night of July 15, Turkey was exposed to the coup attempt organized by Gülenist Terror Group (FETÖ) members who had infiltrated the military and other state institutions over 40 years. The members of this secretive group attacked state institutions, including Parliament, the Presidential Palace, the General Staff compound, the Police Headquarters and the National Intelligence Organization (MİT) compound. They killed 249 civilians and wounded another 2,193 people who were resisting the coup. At the end of the day, the coup attempt claimed its place as the most violent coup attempt in Turkey’s history.

All political party leaders took a stand against the coup on the night of July 15 and in its aftermath. A joint declaration was signed by the ruling Justice and Development Party (AK Party), the CHP, the Nationalist Movement Party (MHP) and the Peoples’ Democratic Party (HDP). It was read in Parliament, which held an emergency session on July 16 after the night the coup was thwarted.

The importance of the common struggle against the coup was emphasized in the statement, “The resistance of all party groups in Parliament to the coup attempt through a united position and with one voice is truly significant and will put its stamp on history. This united position and single voice will further strengthen our nation and national will. The Grand National Assembly of Turkey is at work with one heart. … This joint declaration is the most tangible proof that nothing will ever be the same in Turkey. Despite our differences, we, all four political parties, stand by the national will with all our deputies and our entire organizations and protect and shall protect the nation forever.”

The meeting, which brought together the president, prime minister and CHP and MHP party leaders at the Presidential Palace on July 25, had strengthened the expectation of a new social consensus after the coup. The process that started with the statement of compromise on working together on the new constitution after the meeting by Prime Minister Binali Yıldırım and continued with the rally, in which all political leaders, except for those of the HDP, and the president, attended in the Yenikapı district of Istanbul on Aug. 7, was the symbol of political consensus.

Whether or not CHP Chairman Kemal Kılıçdaroğlu would attend the Democracy and Martyrs Rally was the main subject of interest for a while. The first statement from the CHP was that a delegation would attend the rally. Erdoğan and Yıldırım persistently invited Kılıçdaroğlu to the rally to improve the environment of consensus and increase of public attendance accordingly. Kılıçdaroğlu, in turn, said he would attend the rally. Interpretations of the atmosphere created with the Yenikapı rally say it would make opposition parties, especially the CHP, give up on the singular anti-Erdoğan political discourse. However, it was later understood that such expectations would come to nothing.

Despite expectations, the political atmosphere of consensus from the Yenikapı rally has changed after a while. One of the most important reasons for this change in atmosphere is that the CHP backtracked to anti-Erdoğan political discourse. Despite a stable stance in the aftermath of the coup, the CHP seems to see the coup attempt as a development that will ultimately benefit the government and Erdoğan.

In fact, the CHP gave the first signals of adopting its old rhetoric in its first statement that it would not attend the Yenikapı rally in the first place. In this process, the CHP has remained in between the unbearable heaviness of its old rhetoric and adopting a new approach.

Kılıçdaroğlu, who had said that he would not attend the rally, said, “We have doubts that Erdoğan tries to promote his personal reputation, which is in decline in the international arena, through the opposition leader.”

This is an example of remaining in between and ambiguity. It is hard for the CHP to give up on this political approach, which has been maintained in recent years and has taken the shape of the party of no. Ultimately, the point reached reveals the Sisyphean task in the CHP’s anti-Erdoğan political approach. This approach always takes the CHP to the same point, starting from the beginning.

The clearest reflection of this approach was that the CHP has adopted the discourses of controlled coup and the palace’s coup, internationally circulated by FETÖ. The controlled coup discourse, based on the allegation that the coup was done by the government immediately after the coup emerged as a method for FETÖ to avoid accusations that could be directed at it in relation to the coup. The CHP’s adoption and spread of this discourse has paved the way for the CHP to fall outside of the Yenikapı spirit.

Another reason why Kılıçdaroğlu has stayed out of the culture of consensus created by the Yenikapı spirit is that the shift to the presidential system is on the agenda again. The CHP has joined discussions through the survivability of the system with its old rhetoric about the government system, which have become the most important agenda topic in politics again. Just as after the coup attempt, it has adopted a stance to evaluate this problem on the basis of anti-government and daily politics.

As a result, the main opposition CHP has been out of this spirit of togetherness alongside the HDP, which has not taken part in this process from the beginning after the Yenikapı rally. Despite these developments, it would not be correct to say the Yenikapı spirit has disappeared. Millions of people from different social and political groups from all around the country took part in the commemoration ceremonies on the first anniversary of the July 15 coup attempt, and this shows that this spirit is still alive. The point is that some actors believe that they can win more by adopting opposition politics rather than politics in accordance with the Yenikapı consensus.

Turkey's Position in the Idlib Equation
Next
Loading...
Loading...
We use cookies to ensure that we give you the best experience on our website. If you continue to use this site we will assume that you are happy with it.Ok