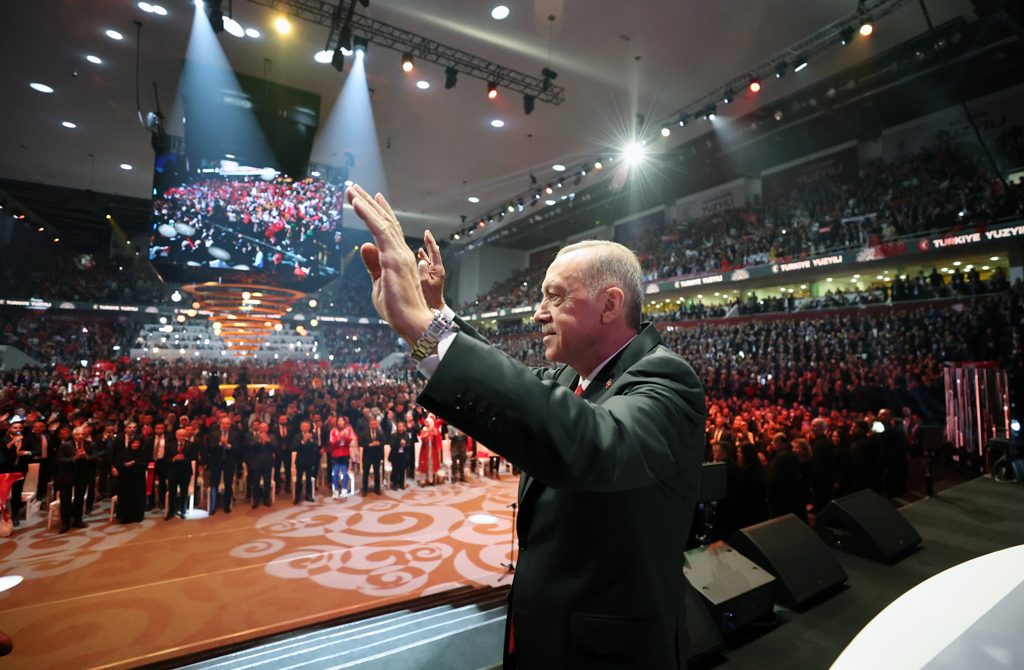 ‘Century of Türkiye,’ revolution to bring peace to world: Erdoğan

President Recep Tayyip Erdoğan on Friday announced the ruling Justice and Development Party’s (AK Party) new vision document “Century of Türkiye” for the new century of the republic, underlining that it is the name of a revolution that will bring democracy, development, peace and welfare to every corner of the world.

“At a time when the world is facing vital challenges, we want to make a strong start to the new century of our republic with the Century of Türkiye,” he said addressing the crowd gathered in the capital Ankara.

As Türkiye prepares to enter the last year of the first century of the republic, they came together for the covenant of the Century of Türkiye, he stated.

“We will elevate the Century of Türkiye by making our country one of the 10 largest states in the world in all fields of politics, economy, technology, military and diplomacy,” Erdoğan said.

“We share with all humanity the message that the Century of Türkiye is the name of a revolution that will bring democracy, development, peace and welfare to every corner of the world.”

Erdoğan noted many challenges faced by the AK Party in the last 20 years and said that they have overcome all these challenges with the support of the Turkish people.

“We have eliminated the conditions that paved the way for the coups one by one,” he said.

“One of the first goals of our Century of Türkiye vision is to draw a new constitution that will be the product of the national will,” Erdoğan also underlined.

He expressed determination to prepare this new constitution in a way that suits the Century of Türkiye and to implement it with the approval of our Parliament and nation, he added.

The president also said that the new constitution will increase the welfare of the Turkish people as well as guarantee the rule of law, pluralism, justice, equity and freedom.

Speaking on a constitutional change regarding the right to wear headscarves, Erdoğan said that the amendment will be submitted to Parliament next week and thereby enable the issue to be eliminated from Türkiye’s agenda for good.

“By submitting it to Parliament next week, we will ensure that this issue, which is a natural right, is completely removed from the country’s agenda.

“We have prepared a constitutional amendment that will protect the family from the threat of deviant movements, and guarantee the educational and working rights of our daughters and ladies with or without headscarves,” he outlined.

Turkish women who wear the headscarf have long struggled under laws that prevented them from wearing headscarves at schools as students and in public institutions as professionals, despite the prevalence of headscarf-wearing women in the country. The issue of the headscarf ban held an important place in public and political debates in Türkiye throughout the 1990s and 2000s.

The headscarf ban in Türkiye was first implemented widely in the 1980s but became stricter after 1997 when the military forced the conservative government to resign in an incident later dubbed the Feb. 28 “postmodern coup.”

Parliament lifted a ban on female students wearing the headscarf at university in 2008 in a move championed by Erdoğan and which the main opposition Republican People’s Party (CHP) lawmakers, including its chair Kemal Kılıçdaroğlu, had sought unsuccessfully to block in the constitutional court.

In 2013, Türkiye lifted a ban on women wearing headscarves in state institutions under reforms that the government said were designed to bolster democracy.

Türkiye explored 540B cubic meters of natural gas reserves in the Black Sea, Erdoğan also said adding: “We will share the joy of new good news in energy with our nation soon.”

The Century of Türkiye vision unlocked

Noting that the ruling party wants to make the 100th anniversary of the republic the milestone of the new era that will change politics in Türkiye with its style, functioning and results, Erdoğan announced the vision that the Century of Türkiye is based on.

The Century of Türkiye is the century of “sustainability,” Erdoğan said and added that they would fight to ensure that the country embraces and strengthens the ecosystem and similar steps are taken in the world.

The next century will be a century of peace, he said, adding that instead of countries that only prioritize their own security and well-being, Türkiye will strive to seek peace in the region and the world as a whole.

Erdoğan continued by saying that the next century would be a century of achievements, which would be accomplished by the inspiration from the predecessors who conquered the lands that Turkish people call home today.

The Century of Türkiye would also be a century of trust and stability, as the president said they will continue to make sure that stability persists for the future, and that they leave many services to the people.

The next century would be one in which the country enhances production, which would be based on advanced technology, with a large market and enhanced employment opportunities by supporting the right production fields, in order to make Türkiye one of the largest global trade and industry hubs.

Productivity would also be one of the priorities in the next century, the president said, adding that the steps to enhance production would be based on this ideology.

Power is another priority, according to Erdoğan, who said that Türkiye would continue to rise with its developing infrastructure.

The digital era and technologies would also be prioritized in the new century, as the country aims to develop itself in all aspects, including the metaverse and blockchain.

Communications is another goal, and they aim to take precautions against disinformation and further strengthen the communications infrastructure.

The next century would be one in which peace prevails, Erdoğan said, adding that the country’s conscientious stance – which is based on national interests, international principles and multilateral balances – has received praise, and the country aims to further develop this stance and present it to humanity.

Science was another field that the president said they would focus on, noting that they aim to ensure that at least 10 Turkish universities make it to the world’s top 500 universities.

Compassion would be another focus, as the country would provide many services for citizens, based on the inspiration of the country’s compassionate past.

Historical values would also be another priority, Erdoğan said, adding that they would aim to further enrich existing values and transfer them to the next generations.

Guests stream in for event

Guests arrived at the Ankara Sports Complex for the ruling AK Party’s “Century of Türkiye” event to mark the centenary of the foundation of the republic and pave the way for its future. Ahead of the gathering, thousands of party members congregated in front of the complex from the early hours of the morning. As many guests from outside Ankara arrived at the event, AK Party members made their way to the complex cheering.

As the ceremony unfolded inside the complex, spectators followed along on the giant screens set up outside. There were also separate platforms for guests, party members, disabled people, journalists and columnists in the event hall.

Before the meeting was launched, Erdoğan addressed the citizens waiting for him in front of the venue.

Noting that he will explain what will be done in the new period during the program, Erdoğan said: “But we have seven months, no stopping in these seven months; keep going.”

Stating that the combat unmanned aircraft system Bayraktar Kızılelma, Gökbey helicopter and armored carriers are located in an area where the sports hall is, Erdoğan stated that they produce actions, not words. Outside the hall, domestically-produced national defense industry products were exhibited.

In addition, extensive security measures that had been planned far in advance were taken at the venue.

Police officers from all units of the Ankara Police Department were assigned to the event.

The AK Party cadres describe the new program as “the future design of the country,” and say it is a “testimony of vision” to “build a great and powerful Türkiye together.”

President Erdoğan was the only speaker at the ceremony, which hosted a wide array of guests, including top figures from every segment of society.

As Türkiye prepares to celebrate 100 years of being a republic and ahead of the 2023 presidential elections, its ruling AK Party unveils a series of programs, projects and targets that will “define the next century.”

Along with the Nationalist Movement Party (MHP) and Great Union Party (BBP), the AK Party’s partners in the People’s Alliance, the party invited the 11 opposition parties including the main opposition CHP and Good Party (IP).

The AK Party shared the logo for its “Century of Türkiye” vision on Oct. 22. Inspired by the Presidency’s emblem, 16 stars sit in a crescent to symbolize fundamental elements of ancient Turkish history while a larger lone star, an integral part of the official Turkish flag, represents the shared legacy. There is also a circular contour in the logo to represent its global aspect while each of the 100 sunbeams flaring out of the crescent moon signifies a year of the republic. The cyclical form and the exclusive shade of gold create the impression that the Century of Türkiye “rises like the sun across the globe.”

Türkiye is set to hold nationwide elections in June 2023, when voters will choose the president as well as all 600 members of Parliament. The president and parliamentary lawmakers are elected to five-year terms, although the president also has the power to call for early elections.

The fact that Türkiye reverted Hagia Sophia from a museum back into a mosque is a significant challenge to global tutelage, President Recep Tayyip Erdoğan said Friday.

Speaking at a ceremony to announce the ruling Justice and Development Party’s (AK Party) “The Century of Türkiye” vision in Ankara, Erdoğan said the country challenged global tutelage, as he thanked citizens for supporting the decision to revert Hagia Sophia.

He noted that his party has always aimed to eliminate any remnants of tutelage and enhance democracy in the country over the past 20 years.

It was an iconic moment in Istanbul and Türkiye’s history when Hagia Sophia left behind its status as a museum and was restored to its former glory as Hagia Sophia Grand Mosque on July 24, 2020.

The iconic monument served as a church for 916 years until the conquest of Istanbul. It then served as a mosque from 1453 to 1934 – nearly 500 years – and most recently as a museum for 86 years. One of the most visited historic buildings in Turkey by domestic and international tourists, Hagia Sophia was added to the UNESCO World Heritage List in 1985.

On July 10, 2020, a Turkish court annulled a 1934 Cabinet decree that had turned Hagia Sophia into a museum, paving the way for its use again as a mosque after the 86-year hiatus.

Turkish opposition’s belated take on the republic’s future
Next
Loading...
Loading...
We use cookies to ensure that we give you the best experience on our website. If you continue to use this site we will assume that you are happy with it.Ok