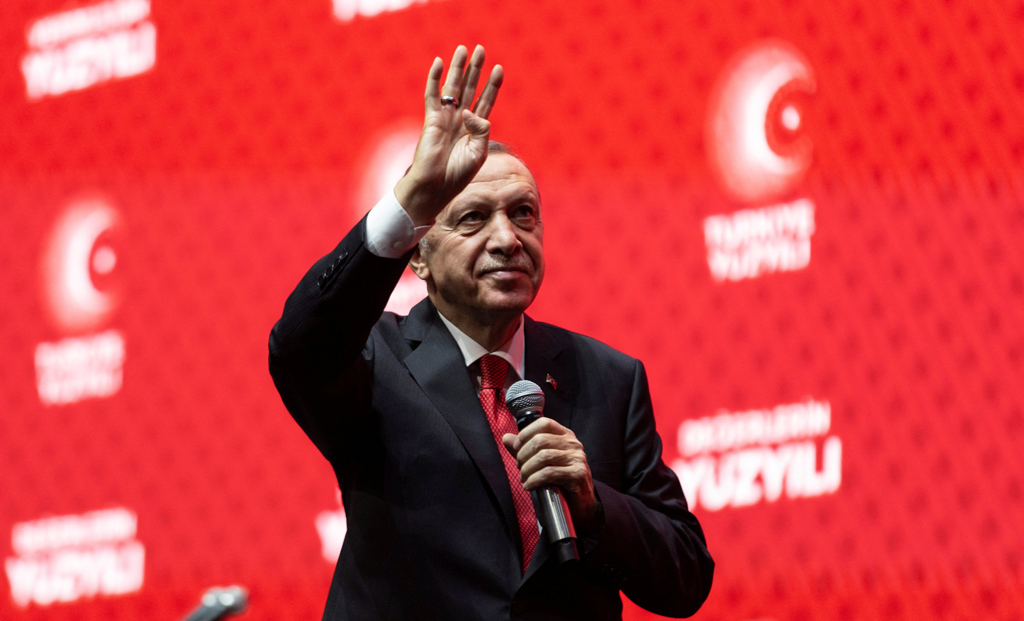 ‘Century of Türkiye’: Raising the republic

Pesident Recep Tayyip Erdoğan unveiled his vision for the “Century of Türkiye” on Friday. Ahead of his arrival at Ankara Arena, the audience enjoyed a noteworthy selection of songs and films. The visual content, which appealed to the country’s various groups starting with the youth, reflected the search for a new beginning and the relevant discourse: “Let us face east and west – but, most importantly, the truth.” Finally, the audience cheered passionately as Erdoğan took the stage with the following song: “Let the Century of Türkiye begin. Right now, not tomorrow.”

As expected, the Turkish president’s speech featured plenty of emotion and references to public service, common values and future goals. The audience burst into wild applause as he described the Hagia Sophia’s reopening as a challenge to global guardianship. A short film screened halfway through Erdoğan’s speech and showed the audience that the dream of Şakir Zümre, a 20th-century pioneer of Turkish industry, had come true, and proved to be inspirational, too.

One could summarize Erdoğan’s vision of the “Century of Türkiye” as a call on all Turkish citizens to finish building a great and powerful country together. Again, it caught my attention that the Turkish president unveiled an open-ended vision and urged everyone to “talk about it, hold discussions and make proposals” until Oct. 29, 2023. It was also significant that his call was accompanied by concrete proposals like “building together, creating a new ground for a national consensus, promoting a participatory and democratic republican identity, realigning the axis of politics with labor and works, positive freedoms, kicking off the rise of Türkiye, highlighting diversity as a source of wealth and escaping the echo chambers.”

The dream to actualize

Erdoğan’s main point was that the successive Justice and Development Party (AK Party) governments had addressed the shortcomings of the republic’s first century over the last two decades and pledged to complete the preparations for the second century. In this regard, the dream of the “Century of Türkiye” reflects a desire to get off to a strong start and elevate the country beyond the level of contemporary civilization. It is about transforming Türkiye into a wise, just and dominant power. It seeks to turn Türkiye into one of the world’s 10 greatest nations. It aims to ensure that Türkiye, which remains at a critical threshold today, becomes a top contender at a higher level.

Erdoğan’s address not only established continuity between the Seljuks, the Ottomans and the republic but also invoked certain symbols and concepts to state an intention to complete Turkish modernization. The essence of that speech was the goal of embracing the republic’s ideals to propel Türkiye’s rise anew.

In truth, Erdoğan positions his political battle at the very heart of the project of the republic, which dates back to Mustafa Kemal Atatürk. Accordingly, he presents the Turkish people with a vision to liberate their country from domestic and foreign guardianship and transform it into a global player. It is possible to argue that this approach represents a serious challenge for the opposition.

Let me wrap up by quoting what I consider the most audacious part of Erdoğan’s address on the vision of the “Century of Türkiye” that he describes as “the new Red Apple:” “We share with all of humanity the good news that the “Century of Türkiye” is the name of a revolution that shall promote democracy, development, peace and peace of mind in all parts of the world, starting with our country and our neighborhood.”

Vision of 'Türkiye's Century’ and the opposition bloc
Previous

The grand vision of 'Türkiye's Century'
Next
Loading...
Loading...
We use cookies to ensure that we give you the best experience on our website. If you continue to use this site we will assume that you are happy with it.Ok