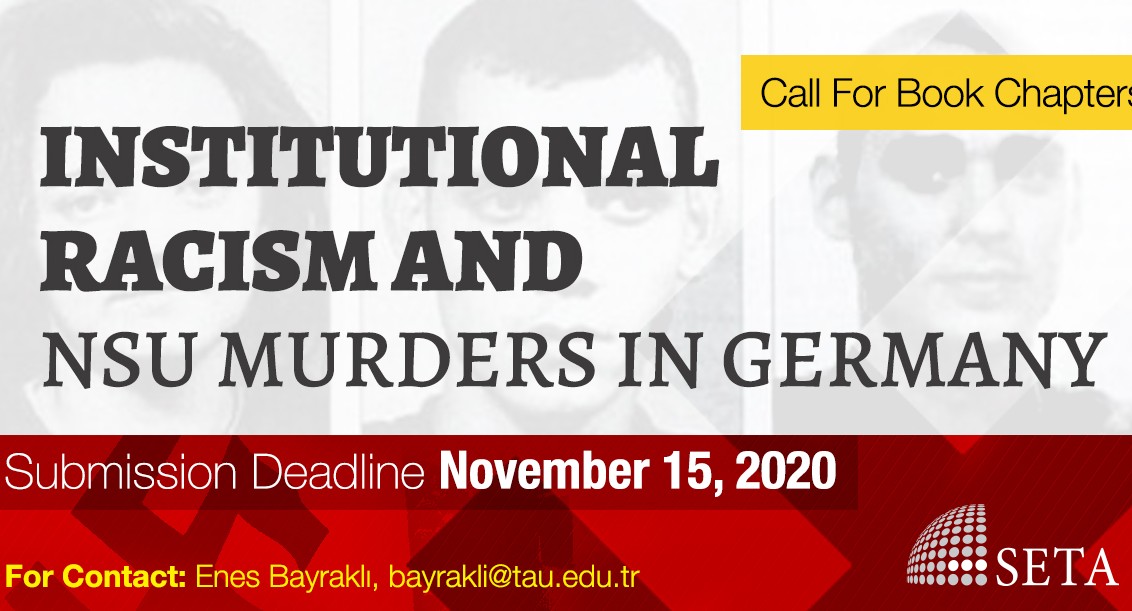 The Foundation for Political, Economic and Social Research (SETA) is calling for a collection of scholarly or scientific chapters contributed by authors to compose a book on the “Institutional Racism and NSU Murders in Germany,” which will be edited by its editors who are experienced and highly-esteemed experts in the field of the proposed book.

The Foundation for Political, Economic and Social Research (SETA) is calling for a collection of scholarly or scientific chapters contributed by authors to compose a book on the “Institutional Racism and NSU Murders in Germany,” which will be edited by its editors who are experienced and highly-esteemed experts in the field of the proposed book.

Brief Introduction to the Book

Although racism and institutional racism are nothing new in Germany, they have occupied the agenda much frequently with the rise of extreme right in recent years. The National Socialist Underground Organization (NSU) is a racist terrorist organization founded in the midst of the 1990s and is responsible for tens of robberies, murders and bomb attacks. The acts of terror by the group are based on far-right and white supremacist ideology. The NSU has come to surface when its leaders were neutralized after a robbery in 2011 and occupied the agenda since then.

The NSU trial was commenced in 2013 and concluded in 2018, but only five of its members were sentenced in the court. The killings of witnesses and the denial of access to certain intelligence documents during the trial process raised questions about links between the NSU and German federal government agencies. Besides, connections between the group and other racist and far-right organizations have become evident.

Considered as the trial of the century, the NSU trial represents deep-rooted racism and institutional racism for it reveals the racism problem in Germany in all its aspects. Closely followed by the international community and German public opinion, in particular, murders committed by the group, and the trial process have, unfortunately, not found audience in Turkey that they deserve.

The objectives of the book are to:

Racism and Institutional Racism in Germany

The NSU and Its Ideology

The NSU Trial and Legal Process

Murders Committed by the NSU and the State of Germany

Murders Committed by the NSU and the German Public Opinion

Murders Committed by the NSU and the Turkish Diaspora

The International Community and the NSU

The Editor’s Comments and Review: March 2021

Anticipated Release of the Book: May 2021

SETA, Foundation for Political, Economic and Social Research, is a non-profit research institute dedicated to innovative studies on national, regional, and international issues. The objective of SETA is to produce up-to-date and accurate knowledge and analyses in the fields of politics, economy and society and inform policy makers and the public on changing political, economic, social and cultural conditions. SETA evaluates national and international issues in an historical and cultural context.

As an information-based research and policy recommending institution, SETA provides a forum for international dialogue to bring different views together with international scholarly standards, and contributes to the formation of a common ground. Through research reports, publications, brain-storming sessions, conferences and policy recommendations, SETA seeks to guide leaders in government, civil society and business and contributes to the informed decision-making mechanisms in Turkey.

Dr. Bayraklı earned his BA, MA and PhD from the Department of Political Science at the University of Vienna, and conducted research for his PhD thesis at the University of Nottingham in Britain between 2009 and 2010. He took office as a deputy director at Yunus Emre Turkish Cultural Center in London in 2011-2013. Mr. Bayraklı also served as the founding director of Yunus Emre Turkish Cultural Centers in Constanta and Bucharest during the period of August-December 2012. Mr. Bayraklı has been a faculty member in the Department of Political Science and International Relations. Currently, he is also the director of European Studies at SETA foundation. His fields of research include the Islamophobia in Europe, Far right movements in Europe, Transformation of Turkish Foreign Policy, Foreign Policy Analysis, German Politics and Foreign Policy.

After completing her primary and secondary education in Turkey, Zeliha Eliaçık commenced her higher education in Germany. She graduated valedictorian of her class at Studienkolleg. Eliaçık earned her BA from the Department of Oriental and Political Science at Ruhr Bochum University. She received an MA from the same university with the study “Die soziale Lage der Juden im Jemen seit der Gründung des Staates Israel” (From the Establishment of the State of Israel to the Present, The Social and Legal Status of Yemeni Jews) With the incentives and scholarship granted by the German Academic Exchange Service (DAAD), she conducted field research in Syria, Yemen, and Jordan for five years, and worked as an academic. Eliaçık worked as a faculty member in charge of cultural activities at the German-Jordanian University. Her main areas of interest are Orientalism, minorities in Muslim and European communities, racism, and Germany’s policy towards Islam. Currently, she is a researcher at SETA Foundation’s Department of European Studies. Eliaçık is fluent in German, Arabic, English, and Turkish.

Turkey's new gas reserves and Black Sea geo-politics
Next
Loading...
Loading...
We use cookies to ensure that we give you the best experience on our website. If you continue to use this site we will assume that you are happy with it.Ok