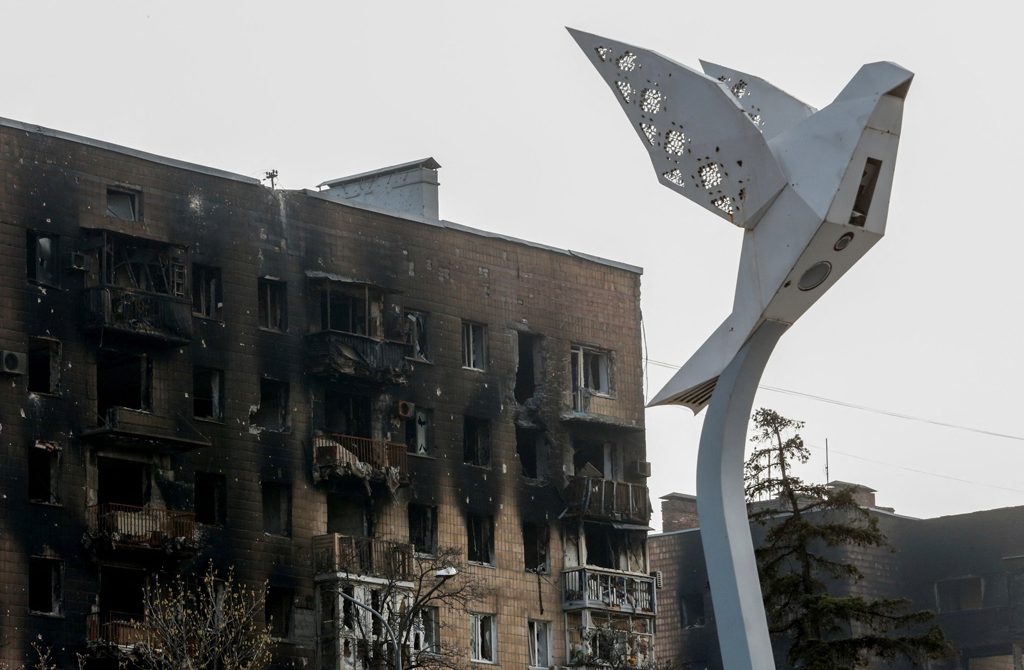 A view shows a lamp pole in the shape of a pigeon located in Freedom Square near a block of flats heavily damaged during the Russian invasion, in Mariupol, Ukraine, April 18, 2022. (Reuters Photo)

We are at a critical juncture in the Russia-Ukraine war. Every indicator from the warring parties signals a further escalation in the coming days. The recent targeting of the Russian missile cruiser Moskva, the bombing of civilians at the train station of Kramatorsk, the brutal footage of massacred and buried civilians from Bucha and Mariupol, and the other inhumane scenes from the places where Russian troops have withdrawn deepen the hostilities and make the possibility of diplomatic negotiations more difficult.

Ukrainian President Volodymyr Zelenskyy is less likely to engage Moscow diplomatically due to increasing pressure from both his people and Western actors after the recent developments, which have overshadowed the positive atmosphere generated following the Istanbul talks. The shipment of advanced military equipment to Ukraine by the U.S., the U.K. and some other NATO member countries has also increased in the last couple of days. This is also a sign of a new escalation. Nobody can accurately predict how long this further escalation may last and how destructive it will be.

Neptune missiles hit Moskva, the flagship of Russia’s Black Sea fleet, and the cruiser sank. The loss of such a strategic asset in the Black Sea fleet is not just a military loss but, at the same time, an embarrassment for the Russian naval enterprise. According to military experts, there are two alternatives to Moskva, and they cannot enter the Black Sea due to the restrictions related to the 1936 Montreux Convention pact. The loss of Moskva and some less important other ships may also put more Russian pressure on Turkey. If Russia feels further encircled and weak in the Black Sea, it may consider using tactical nuclear weapons to change the balance of power on the field. This would be a catastrophe for the Ukrainian side but may also increase pressure put on Russian President Vladimir Putin.

According to a Bloomberg report, Russia’s loss of two important vessels (the Moskva and Russia’s Alligator-class landing ship Saratov) “may review maritime posture in the Black Sea.” Russia’s geographical downscaling of the war does not necessarily mean that the intensity will be reduced. The Kremlin may increase attacks conducted with ballistic and cruise missiles. In terms of total capacity, the Russian military may engage in more indiscriminate destruction. The Ukrainian military seems to be preparing for such an attack, yet their overall ability may have limitations compared to the Russian side.

The European security architecture will be reshaped after the conclusion of the Ukraine war. There may not be an immediate peace agreement after the settlement of the war, but there will be an interim accord that will reshape the power balance in the region. Russia may decide to expand the scale of the war if it feels further encircled and overstretched. There may be continuous fluctuations in the Russia-West relations in the future. Pro-Russian political actors and Russian sympathizers in Europe will be weakened no matter how the war is concluded. This is a significant blow to Russia’s long-term interests in the continent. Russia’s popularity in the other parts of the world is not getting better either.

The ongoing war will have a long-lasting impact on Europe. For the global power reconfiguration, Washington and the European leaders are in careful engagement and coordination with the Ukrainian leadership. Those leaders are more concerned about the possible outcome of the war rather than its destructive impact on the Ukrainian people. European leaders and the U.S. have probably promised Ukraine economic and military aid for post-war reconstruction. Still, the human and material costs of further escalation of the current war may be unpredictably high. The level of destruction may overshadow Zelenskyy’s popularity if he survives the war. The Ukrainian people will sooner or later question his decisions and complicated relations with the Western powers.

The European leaders visiting the Ukrainian capital Kyiv amid the war demonstrate their solidarity with Zelenskyy. This solidarity boosts the morale of the Ukrainian people and puts more burden on the shoulders of the Ukrainian leadership and military. European and American leaders have not hesitated to provide substantial military aid to Ukraine. Though this military aid may not be sufficient to resist Russia, it has the potential to slow down and even stop Russian advancements. European and American military aid to Ukraine increases Russia’s costs in their military campaign in Ukraine.

If the U.S. and European actors demonstrate weakness in supporting Ukraine, they may lose their credibility in other parts of the world. This will be interpreted as a significant weakness and may push many American and European allies in Africa, the Middle East and Central and East Asia to find new partners to secure their interests. Both Russian and Western allies and associates are closely examining the developments in Ukraine, and everyone will make a geopolitical reassessment once the dust settles in the country.

According to American political scientist Eliot Cohen, if Ukraine fails to contain Russia in this war, a war between NATO and Russia is more likely. Such an outcome will increase the likelihood of Russian interventions in its southern and western peripheries. I do not think that Russia will prefer to engage in a direct military confrontation with NATO in the short term. Still, this likely motivated Russia to expand further in the former Soviet spheres of influence. Russia may engage in an indirect confrontation with NATO members and confront Western interests elsewhere. A Ukrainian victory may slow down or even stop Russian advancements around the Black Sea. Still, Russia may return more aggressively in other areas, including the Middle East and North Africa (MENA) and the Balkans. The complete failure of the Russian war in Ukraine will not burn out the Russian appetite to confront Western interests.

A leadership change in Moscow may also have significant consequences for all the actors, yet the Russian people and the Russian establishment are united around Putin. Most Russians still believe that the Ukraine campaign is a war of necessity and crucial for the long-term security of Russia. Inaptitude on the battlefield may still have the potential to weaken Putin’s credibility. Putin will do his best and push the limits to save his image. This is another sign that a further escalation is likely in the coming days.

Russia and Ukraine are far from a diplomatic deal, and another cycle of escalation may make a diplomatic solution even more difficult. Primary and secondary parties are preparing for a more fierce fight in the coming days. There is an urgent need to return to diplomacy to prevent a catastrophe in Ukraine. A cease-fire can only be reached with bolder decisions and steps from leaders in both Moscow and Kyiv. Unfortunately, very few reasonable and responsible actors are trying to convince Putin and Zelenskyy to take bolder decisions for a quick exit from the mounting quagmire.

Another Ramadan, another Israeli atrocity
Previous

Turkish opposition's roundtable fails to excite electorate
Next
Loading...
Loading...
We use cookies to ensure that we give you the best experience on our website. If you continue to use this site we will assume that you are happy with it.Ok