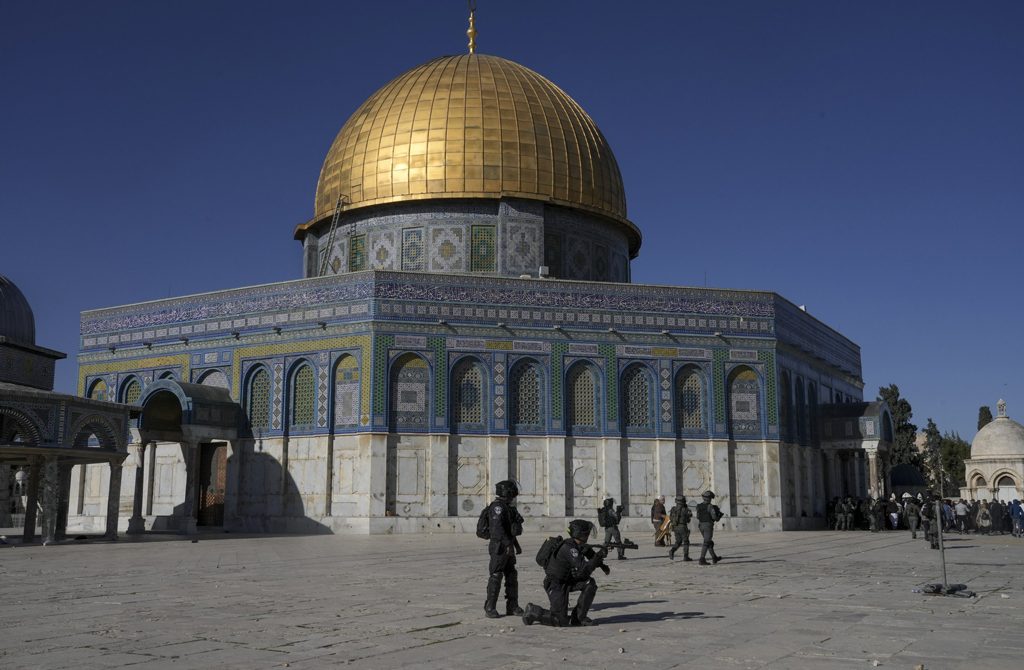 Israeli security forces take position against Palestinian worshipers in front of the Dome of the Rock shrine in their raid of the Al-Aqsa Mosque, East Jerusalem, occupied Palestine, April 15, 2022. (AP Photo)

Another Ramadan, another Israeli atrocity

Israel has made a habit of attacking and killing innocent Muslims, including children and women, praying in the Al-Aqsa Mosque in East Jerusalem. In order to deter not only Palestinians but also Muslims coming from different parts of the world during Ramadan, Israel has intensified the level of violence seen at the site. Israeli security forces violated Islamic principles and entered the mosque with their shoes on. They disrespected the religion of Islam and all its followers worldwide. It is obvious that there is no power challenging or threatening Israel.

Israel often accuses Hamas or some other Palestinian groups, claiming that they target Israeli targets. However, this is not the case, as Israel starts its atrocities in the Al-Aqsa Mosque and later extends them to the other parts of Palestine, including the West Bank. Everybody knows that Israel insistently chooses the holy month of Ramadan to further its claims over the holy sites. It is not a secret that Israel is attempting to destroy the Islamic sites and rebuild Jewish buildings. In short, it aims to de-Islamize Palestinian lands.

There are some important meanings and consequences of the Israeli atrocities. First, Israel continues to violate the very basic principles of human rights, the main rules of international law, the decisions of the United Nations and the norms of international order. It challenges the very foundation of the nation-state system established by Western countries.

Second, there is an absolute power asymmetry between Israel and the Palestinian people. On the one hand, Palestinians have been living under prison conditions for decades. Unless the Israeli security forces, one of the most heavily armed forces in the world, allow them to, Palestinians are unable to communicate with the outside world. That is, they are isolated from the outside world. On the other hand, Palestinian political actors are not united. There are many differences and problems among the Palestinian groups. However, when necessary, the Israeli government tends to exaggerate the power of Palestinian political actors in order to receive unconditional support from Western governments.

Third, Israel is well aware that there is no Palestinian cause anymore for the governments of Muslim states. Most Arab countries have increasingly remained indifferent to the worsening conditions of the Palestinian people. However, Israel is well aware that the Muslim peoples, unlike their governments, still attach great importance to the holy sites in Jerusalem. The sensitivity and awareness toward the holy sites reach the maximum level during Ramadan. In other words, Israel challenges the concerns and hopes of the Islamic ummah, an Arabic and Quranic word meaning “community.”

Fourth, Western governments continue to give unconditional support to Israel, the occupying state. Thus, Western governments pave the way for all other states to violate any principle of the international system. The power relationship has begun to dominate the policies of almost all global and regional powers. Considering the relatively declining power of Western countries, this process will be destructive for not only all targeted states and societies, such as the Palestinians, but also for stronger states such as Western countries and Israel. Israel’s unrestricted actions will be monitored by other states. The anti-Islamic policies of the Indian government forces against the huge Muslim population of India or the Russian occupation and atrocities against the innocent Ukrainian people are no different from Israel’s continuous aggression.

Within this context, it seems that there is no relevant, strong country in the world struggling for global peace. The global rivalry between big powers will lead the world and humanity into a more unstable and chaotic political system. Conflictual and unilateral policies of global powers destroy not only states and societies but also the planet itself. Thus, in the near future, the globe will be less livable. Considering the interconnectedness of the world, it is clear that the safety of the strong depends on the safety of the weak. The COVID-19 pandemic and many other global developments have proven this.

Bolder steps required for peace in Ukraine war
Next
Loading...
Loading...
We use cookies to ensure that we give you the best experience on our website. If you continue to use this site we will assume that you are happy with it.Ok