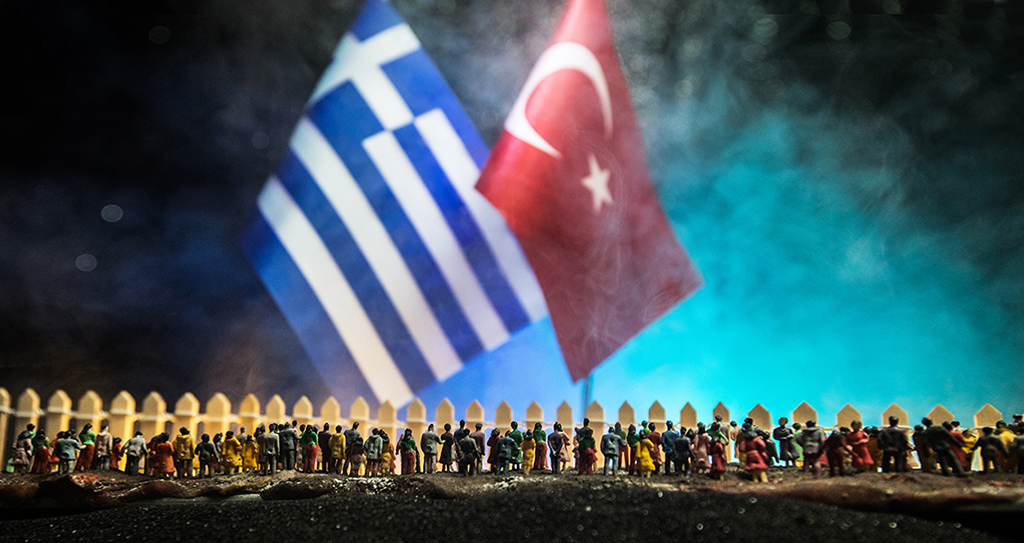 The analysis provides an overview of the two central security challenges Greece faces today, namely the energy rivalry with Turkey in the Eastern Mediterranean/Libya, and the mass influx of refugees at the Greek-Turkish border, and discusses the prospects for a renewed Greek-Turkish détente.

The analysis provides an overview of the two central security challenges Greece faces today, namely the energy rivalry with Turkey in the Eastern Mediterranean/Libya, and the mass influx of refugees at the Greek-Turkish border, and discusses the prospects for a renewed Greek-Turkish détente.

The November 2019 Turkey-Libya maritime accord and the most recent mass influx of refugees at the Greek-Turkish border constitute the two central challenges to Greece’s security today. Turkey’s deal with the UN-recognized Government of National Accord (GNA) based in Tripoli imperils Greek economic interests in the Eastern Mediterranean and dashes the hopes for the construction of the East Mediterranean gas pipeline, whereas the refugee influx has significantly strained Greek-Turkish relations and has tarnished Greek (and European) normative standing over its harsh treatment of the refugees. Greece has already deployed major military forces to secure its eastern land border with Turkey and concurrently sponsors the rebel leader Khalifa Haftar in his anti-GNA offensive in Libya, but Athens’s deterrent ability on its own is quite low.

The comparatively low deterrent ability is a recurring problem for which Greek defense doctrine has struggled to devise a remedy. Realizing the limits of internal balancing, for decades Greece has had to rely on Western support to offset the quantitative and qualitative superiority of Turkish military forces. However, with the EU presently in a state of strategic atrophy and very much divided over how to deal with Turkey, Greece’s time-tested strategy of external balancing is also facing its limits. Under such circumstances and given the comparatively meagre economic resources, long-term strategic competition with Turkey is not an option for Greece. Instead, Athens’s security interests would actually be best served by a détente with Ankara. Since the 1970s, Greek statesmen have consistently opted for rapprochement when Greece and Turkey were on the brink of armed confrontation several times over oil exploration rights in the Aegean. Today, with Turkey having much more economic and military power than in the past, Greece should be even more willing to put an end to its policy of brinkmanship and seek a reconciliation when it comes to natural gas exploration rights in the Eastern Mediterranean, and the refugee and the Libyan crises. Most importantly, Greece should push the EU to end its buck-passing strategy in the face of the threat posed by the Syrian regime and Russia. Continuing to remain on the sidelines would sow further divisions within the EU, would fuel populism and xenophobia across the continent, and would imperil Greek and European security interests in the Mediterranean.

Why coronavirus fails to end discrepancies
Next
Loading...
Loading...
We use cookies to ensure that we give you the best experience on our website. If you continue to use this site we will assume that you are happy with it.Ok