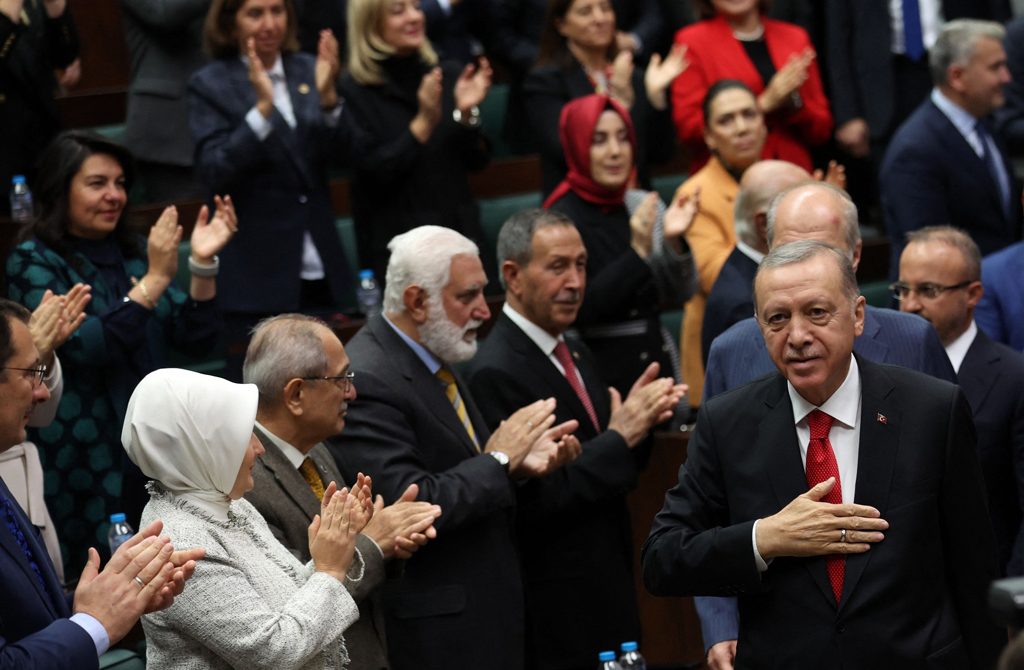 President and leader of the Justice and Development Party (AK Party) Recep Tayyip Erdoğan is applauded by lawmakers during his party's group meeting at the Turkish Grand National Assembly in Ankara, Türkiye, Nov. 2, 2022. (AFP Photo)

AK Party: Secret to 20 years in power, tips for the next phase

'It is perfectly understandable that the AK Party, which oversaw major transformations from identity initiatives to the defense industry, has been at the heart of a heated debate for 12 years'

The ruling Justice and Development Party (AK Party) celebrated 20 years in power on Thursday. The success of this movement, which came to power on Nov. 3, 2002, just one year after its establishment, remains unparalleled in the history of Türkiye’s multiparty democracy.

Obviously, there are many factors behind this achievement. Leadership, the movement’s ability to reinvent itself without losing touch with voters, the politics of service/works, the struggle against guardianship, reforms, the effective use of foreign policy’s transformative function, crisis management skills and the ability to successfully interpret and adapt to changes in international politics immediately come to mind. Over the course of two decades, President Recep Tayyip Erdoğan kept distinguishing himself from his opponents with his dynamism, strategic insights, pragmatism, perseverance and ability to connect with the people.

The fact that Erdoğan unveiled his vision for “Türkiye’s Century” (before the opposition), opened the nation’s first indigenous electric car factory and negotiated the reopening of the Black Sea grain corridor with his Russian counterpart Vladimir Putin to ease the minds governments around the world attests to this, too. Indeed, Erdoğan’s profile as a prominent leader is full of exceptions and superiorities that require the body of literature on leadership in Turkish politics to be rewritten. Needless to say, however, that exceptional success also reflects the decadeslong experience and expectations of Türkiye’s conservatives.

Over the course of the last two decades, the AK Party encountered several attempts to remove it from power. The e-memorandum of 2007, the closure case of 2008, the Gezi Park riots, the December 2013 judicial coup attempt and the July 15, 2016 coup attempt immediately come to mind. The movement overcame those challenges by relying on the ballot box and transforming Turkish politics. Ultimately, it made civilian politics relevant enough to make key decisions without oversight. Türkiye’s adoption of the presidential system of government was but one of those decisions. Indeed, what makes next year’s elections critically important is the continued ability of civilians to call the shots.

It is perfectly understandable that the AK Party, which oversaw major transformations from “identity initiatives” to the defense industry, has been at the heart of a heated debate for 12 years. After all, countless transformations have taken place over the last two decades, as the movement took crucial steps, proving that Erdoğan was right to declare at the AK Party’s first meeting that “nothing will be the same again.”

It also makes sense that some groups, which grew accustomed to power changing hands in every election in the 1990s, are exhausted by the AK Party’s “20 years of uninterrupted rule.”

The solution, however, is not to accumulate such great anger. Likewise, it would be misleading to account for the AK Party’s success with reference to certain extraordinary practices. The fact that those commentators, who were absolutely sure that the AK Party would lose next year’s election just a few months ago, are currently looking for ways to help the opposition gain momentum, too, reflects a simple truth: The AK Party and its leader, Recep Tayyip Erdoğan, are capable of overcoming crises and evolving. The movement’s renewed emphasis on inclusive rhetoric with “Türkiye’s Century” attests to that fact.

Tips ahead of the elections

Still, here are some recommendations for the AK Party ahead of the 2023 elections:

• The AK Party has to assume that the opposition’s lack of focus is temporary and find a way to overcome the burden and wear and tear of two decades in charge.

• It needs to build on its success in foreign policy and national security to develop more inclusive policies on the home front.

• The movement should highlight positive policies and rhetoric to connect with Kurds, young people, disgruntled conservatives and other undecided voters. The most recent “Alevi opening” and social housing projects set an important precedent there.

• Pursuing justice in income distribution must receive more attention in the fight against the cost of living.

• The movement has to keep trying to win over new players in every election.

• As a movement that blends reforms with struggle, the AK Party should portray itself as the readiest player for 21st-century crises.

• It must remain committed to “generating a new national consensus.”

• It needs to emphasize the uniting recommendations in its vision document’s final part more frequently.

• To reach those goals, the AK Party must mobilize our nation’s human capital as comprehensively as possible.

The two chessboards of the Turkish opposition
Next
Loading...
Loading...
We use cookies to ensure that we give you the best experience on our website. If you continue to use this site we will assume that you are happy with it.Ok