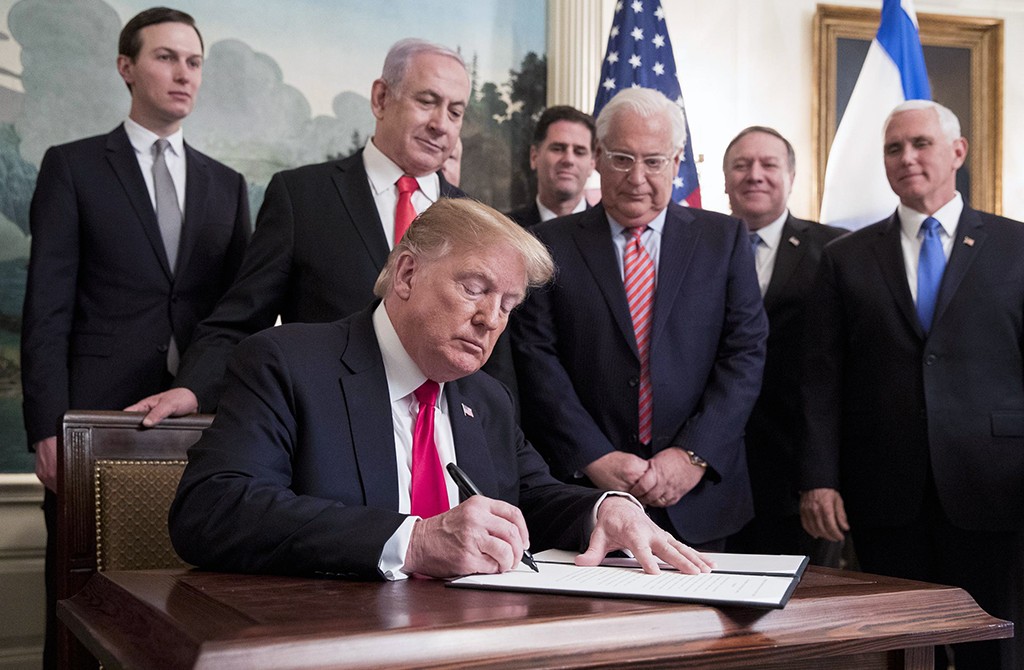 U.S. President Donald Trump (C) signs an order recognizing the Golan Heights as Israeli territory, in front of Prime Minister of Israel Benjamin Netanyahu (back C), in the Diplomatic Reception Room of the White House in Washington, March 25, 2019.

A toxic mix of white supremacy and Christian Zionism

All eyes in Turkey are set on this month's municipal elections, yet a significant transformation is underway in the Middle East. U.S. President Donald Trump, whose Jerusalem move drew ire, recognized Israel's annexation of the Golan Heights in a radical overhaul of U.S. foreign policy.

All eyes in Turkey are set on this month’s municipal elections, yet a significant transformation is underway in the Middle East. U.S. President Donald Trump, whose Jerusalem move drew ire, recognized Israel’s annexation of the Golan Heights in a radical overhaul of U.S. foreign policy. This step goes beyond mounting pressure on Palestinians to further Israeli interests. The Trump administration not only revises Washington’s global role and priorities but also takes the U.S. government’s relationship with religion and politics to a new level. Trump effectively places White Evangelicalism at the heart of American foreign policy. In other words, the administration’s support for Israeli expansionism has deep theological roots.

According to Christian Zionism, the gathering of Jews in Israel is a prerequisite for the Second Coming of Christ and a final battle between good and evil – to rebuild the Temple of Solomon. Andrew Chesnut, a professor of religious studies at Virginia Commonwealth University, argues that the majority of white evangelicals in America subscribe to that ideology. He warns that senior U.S. officials could incite armed conflict to bring the world closer to Armageddon.

Under different circumstances, one could have dismissed Chesnut’s claim as an exaggeration. The evangelical support behind Trump, who leads a secular lifestyle, however, rings alarm bells. Indeed, Vice President Mike Pence and Secretary of State Mike Pompeo make no attempt to conceal how much evangelical theology influences their politics.

Speaking at the American University in Cairo earlier this year, Pompeo proudly announced that he always kept a Bible open on his desk. More recently, he said in Jerusalem that Trump was like a modern-day Queen Esther because the U.S. Secretary of State believed that God might have sent Trump to save the Jewish people. Jews around the world celebrate Purim to remember Queen Esther, the Persian king’s wife who prevented the annihilation of Jews.

This is not the first time that administration officials attempted to link the Trump presidency to biblical prophecy. The U.S. president’s decision to move his country’s embassy from Tel Aviv to Jerusalem received a similar response from evangelicals, who likened Trump to Cyrus the Great who allowed the Jews to return to Jerusalem to rebuild the Temple of Solomon.

U.S. presidents never made any attempt to exploit religion for political gain. Presidents Ronald Reagan and George H.W. Bush immediately come to mind. So do references by George W. Bush to the Crusades after 9/11. Now Trump, together with Pence and Pompeo, use evangelical theology to make foreign policy.

The Trump administration legitimizes its support for Israeli expansionism, increased pressure on the Palestinians and the demonization of Iran with reference to evangelical theology. This is no pragmatic decision-making by politicians. Nor is it limited to making oneself look like the chosen one to win votes. At a time when identity politics is on the rise, white supremacy takes a radical turn and evolves into terrorism, America’s top officials are using a highly problematic language. Their rhetoric provides ammunition to radicals in the Western and Islamic worlds.

The world has witnessed how white supremacy, together with terrorism, resulted in the killing of 51 Muslims in New Zealand with Crusader symbols. I cannot imagine the outcome of individual or organized radicalism that feeds off a toxic mix of white supremacy and Christian Zionism could have.

Perspective: The Geopolitical Importance of the Ypg-controlled Areas in Syria | Energy and Water Resources, and Agricultural Lands
Previous

Analysis: The March 31 Local Elections in Turkey
Next
Loading...
Loading...
We use cookies to ensure that we give you the best experience on our website. If you continue to use this site we will assume that you are happy with it.Ok