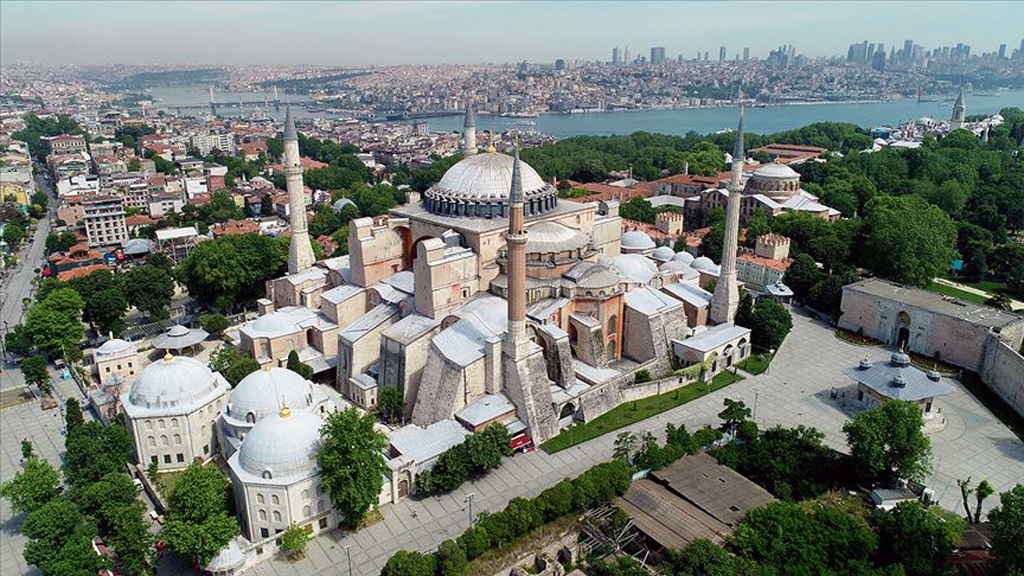 A moment of peace: The Hagia Sophia decision

Shortly after the Council of State annulled a 1934 decree that converted Hagia Sophia into a museum, President Recep Tayyip Erdoğan on Friday issued a decree to open the facility to worshippers. After decades of calls "to break the chains and open Hagia Sophia," the people finally got what they wanted.

Congratulations to the Turkish people and the Muslim world on Hagia Sophia’s reinstatement as a mosque after long years of separation!

Shortly after the Council of State annulled a 1934 decree that converted Hagia Sophia into a museum, President Recep Tayyip Erdoğan on Friday issued a decree to open the facility to worshippers. After decades of calls “to break the chains and open Hagia Sophia,” the people finally got what they wanted.

That this hugely symbolic reopening took place under Erdoğan’s watch was no surprise. The president has been the leader of Turkey at a time when the country attempted to overcome some serious challenges. In the end, it was Erdoğan who gave the masses what they wanted.

Let us recall that Erdoğan’s governments abolished a controversial ban on women wearing the Islamic headscarf on college campuses and in public institutions, carved out additional room for religious instruction and returned the properties of non-Muslim charitable foundations.

On his Justice and Development Party’s (AK Party) watch, Turkey oversaw the expansion of religious freedoms and abandoned the repressive approach of ultra-secularist, Kemalists, with regard to religious demands and rights. The movement facilitated a process of democratic normalization for Muslims and non-Muslims alike. Indeed, the reinstatement of Hagia Sophia was the latest move as part of that process.

The Council of State based its decision to annul the 1934 decree primarily on the fact that the Hagia Sophia was part of Sultan Mehmed II’s (the Conqueror) charitable foundation. It stated that any property, once endowed, cannot be used in a different way than its stated purpose.

With reference to rules on charitable foundations, the Council established that the state had a “positive responsibility” to ensure that said property must be used in line with the endower’s will, and a “negative responsibility” not to interfere in ways that would eliminate the will of the endower. That court ruling represents a safeguard for charitable foundations against the state.

Although the U.S., Europe and Russia expressed concern over the decision, the decision to reinstate the Hagia Sophia as a museum does not fall within the purview of international law. It is Turkey’s own decision based on its national laws.

The Hagia Sophia’s reinstatement as a mosque neither diminishes its status as a world heritage site nor prevents non-Muslims from visiting this extraordinary place. Instead, the Turkish people decided that it ought to be a living place of worship. This is indeed one effective way of protecting the Hagia Sophia.

This decision’s critiques from the Christian world must take into consideration how Turkey cared for the sacred sites of various religions – including the Bulgarian St. Stephen Church in Istanbul. Keeping in mind the cultural genocide against Ottoman and Muslim works in the Balkans and Turkey’s protection of churches and synagogues, Western governments, not Ankara, needs a lesson in religious freedoms.

My recommendation to Western media outlets, which desperately try to exploit Turkey’s decision to start a new campaign, would be to carefully analyze how the main opposition Republican People’s Party (CHP) simply urged the government to open the Hagia Sophia. This decision, which is supported jointly by the Turkish people, has a meaning beyond everyday politics.

For me, the decision to reinstate the Hagia Sophia as a mosque is about bringing some peace to the souls of everyone that made sacrifices to make this piece of land our home. It represents a moment of joy for the people’s sacred will – which they demonstrated on July 15, 2016. It is a reward for the veterans, who stood in front of tanks not to leave alone Erdoğan as their ancestors had abandoned the late Adnan Menderes. It is a moment of peace for everyone that lost their lives that night to defend their country and the nation. That this auspicious step was taken on a Friday, shortly before the July 15 commemorations, too, is an additional source of happiness.

The impact of the July 15 events on Turkish politics
Next
Loading...
Loading...
We use cookies to ensure that we give you the best experience on our website. If you continue to use this site we will assume that you are happy with it.Ok