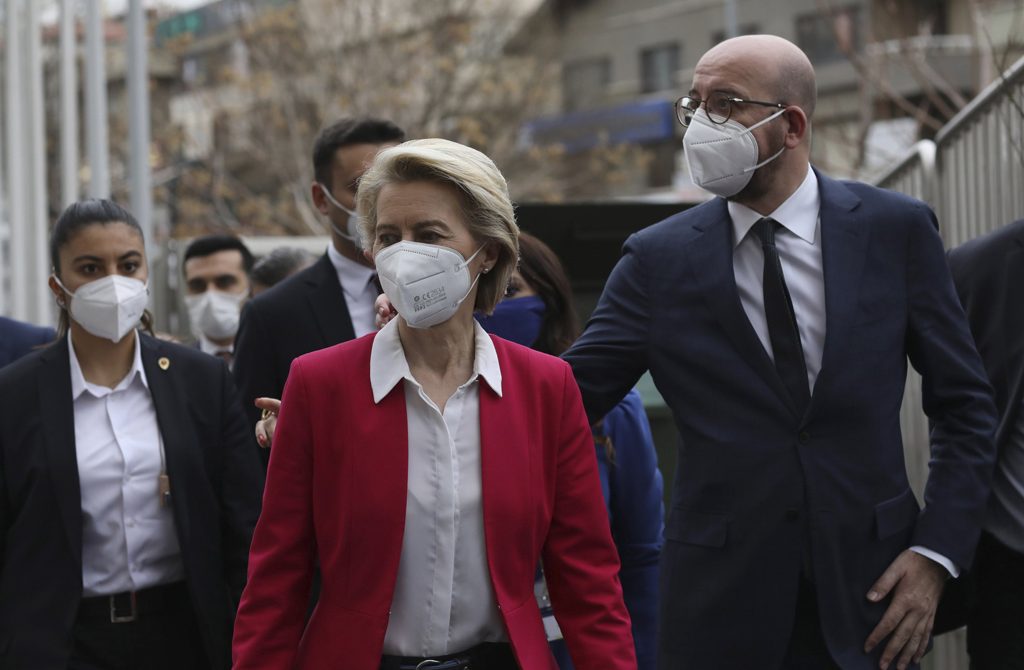 A lost year in Turkish-EU relations

2021 was not filled with many positive stories about Turkish-European Union relations. At the end of 2020, in a report published The Foundation for Political, Economic and Social Research (SETA), we assessed the conclusion of cautious optimism for 2021. While the side of caution prevails, the optimism has been delayed for yet another year.

2021 was not filled with many positive stories about Turkish-European Union relations. At the end of 2020, in a report published The Foundation for Political, Economic and Social Research (SETA), we assessed the conclusion of cautious optimism for 2021. While the side of caution prevails, the optimism has been delayed for yet another year.

Unfortunately, the relations between Turkey and the EU were shallow at best. No progress was made to address significant issues such as the modernization of the customs union, visa-free travel of Turkish citizens to Europe and a return to the perspective of membership. Several superficial crises shadowed high-level contact with Ankara. The Greek and Greek Cypriot sides managed to feed the tension in the Eastern Mediterranean rather than taking bold steps to address their main problems with Ankara. The Afghanistan and Ukraine crises once again highlighted Turkey’s importance for NATO and European security, even though there were fluctuations in the Turkish lira. The Turkish manufacturing and tourism sectors continued to be attractive for European actors.

One of the most important highlights of 2021 for Europe was German Chancellor Angela Merkel’s farewell to active politics. Merkel was a strong leader and a problem solver who managed to prevent and resolve issues between Ankara and Berlin and between Ankara and Brussels. Merkel’s retirement from active politics will generate a gap in Turkey’s relations with Germany and the EU. Over the last decade, Merkel played a significant role as a problem solver and mediator between Turkey and the EU. Merkel’s diplomatic moves and crisis management skills are respected and appreciated in Ankara. Germany’s recent efforts to reduce the tension between Turkey and Greece is also a constructive policy that is in the interest of all the relevant parties.

It is not clear who will fill the leadership gap in Europe. Regardless, there will not be a significant breakthrough with Ankara in the short term, and this does not generate any excitement in Turkey about the EU.

A protocol crisis shadowed the European Council and European Commission’s heads’ visit to Ankara on April 2021. Increasing high-level contact between Ankara and Brussels was an essential pillar of the Turkish-EU statement of March 18, 2016. Despite the potential for joint interests, European actors tried to avoid or slow down their engagement with President Recep Tayyip Erdoğan due to political pressure at home and existing prejudices. This limited high-level communication reduced the potential for cooperation and collaboration between Turkey and the EU. The lack of meaningful high-level contact also increased the misperceptions between the parties.

Erdoğan hosted European Council President Charles Michel and European Commission President Ursula von der Leyen in the Presidential Complex in Ankara in April. While Erdoğan and Michel sat next to each other, von der Leyen stood for a while, and she was eventually seated right across from Foreign Minister Mevlüt Çavuşoğlu. The way the room was organized and the two European leaders were placed was attributed to Ankara’s “disrespect” to von der Leyen. Indeed the seating protocol was decided by the protocol officials of the European Council. Some European politicians and journalists even interpreted this unfortunate issue as a patriarchal and sexist approach against a female politician. Italian Prime Minister Mario Draghi even accused Erdoğan of being authoritarian and misogynist.

Even after the issue was clarified, nobody apologized for their manipulative comments regarding the protocol crisis in Ankara. The problem was the European press and the European actors’ readiness to buy such a story, confirming their already existing prejudices against Turkey and its president.

Debates on the Istanbul Convention were another issue that shadowed Turkish-EU relations in 2021. Turkey’s withdrawal from the Istanbul Convention on violence against women was portrayed as Ankara straying away from European values. The issue of Turkey’s decision to withdraw from the Istanbul Convention was controversial in the country as well, with many circles interpreting this move as a sign of devolution in women’s rights. Many European leaders publicly criticized Erdoğan for this decision and viewed it as part of Turkey’s alleged democratic backtracking and divergence from European values. However, Turkish authorities reaffirmed Ankara’s plan to maintain the national laws and regulations protecting and promoting women’s rights.

European Court of Human Rights (ECtHR) rulings called for the release of Turkish businessperson Osman Kavala and Peoples’ Democratic Party (HDP) former co-Chair Selahattin Demirtaş. Kavala’s pretrial detention is characterized as allegedly an “action with an ulterior purpose to silence a human rights defender.” Similarly, Demirtaş’s pretrial detention is considered an infringement on activities and speeches protected under the ECtHR. Furthermore, the Council of Europe reminded Turkey that Ankara has obligations to abide by the court’s earlier decision.

International crises in Afghanistan, Russia and Libya once again highlighted Turkey’s significance as a critical geopolitical stakeholder for EU and NATO security. Turkey played a significant role in evacuating diplomats and civilian personnel, including those from European and NATO member countries. Turkey continued to work collaboratively with European partners on the Afghanistan issue. Turkey’s consultations with Qatar and Taliban authorities to take on the administration of Kabul Hamid Karzai International Airport is also an important issue. If Turkey takes on a role in running Kabul airport, this may help facilitate the management of Afghanistan’s current crises. Afghanistan is on the brink of famine, and there is a mounting humanitarian crisis. Managing the humanitarian problems in Afghanistan will also serve the interests of European security and prevent a further irregular refugee flow.

For the current crisis between Ukraine and Russia, Turkey tried to pursue a more balanced approach rather than taking a firm stance against Russia. Turkey supports strategic cooperation with Ukraine, especially in the field of the defense industry, and the relations between the two countries are booming. Turkey became one of the critical partners of Ukraine in the areas of security, trade and tourism. Turkey’s drone exports to Ukraine continue to strengthen Ukrainian security. On the other hand, despite some disagreements, the relations between Ankara and Moscow are still strong. Turkey and Russia maintain differing positions on many issues, such as Syria, Libya and Ukraine. Still, they coordinate balanced relations and manage to collaborate in trade, tourism and energy.

Turkey does not want military tension in the Black Sea and, as a trusted partner of both Ukraine and Russia, tries to play a role to mitigate tensions on that ground. Indeed, many European countries, including Germany and France, are also concerned about escalating tensions between Russia and NATO. Such tensions will make European countries more vulnerable to Washington. After the Trump legacy, European actors are more skeptical about their dependence on the United States for broader European security.

Ankara can play a significant role as both a balancing actor and a third-party mediator to reduce the tension in the Black Sea region. The overall course in tensions between Russia and Ukraine will be determined in relation to broader geopolitical concerns and calculations of all the relevant great powers. The mitigation of tensions between Russia and Ukraine is in the interest of both Turkey and European actors. Turkey will play a significant role in all the possible scenarios. Therefore, it would be in the interest of the European actors to maintain friendly relations with Ankara.

Tensions with U.S. and its impact on Europe

Many European countries are following the position of Washington in changing their relations with Ankara in the issues of foreign policy and security. The diplomatic scandal that erupted with the declaration of the ambassadors of 10 Western countries’ Twitter statement calling for the immediate release of Kavala stirred controversy in Ankara. The U.S. ambassador led the irresponsible statement. The crisis faded after the same diplomatic actors issued statements about their respect for Turkey’s sovereignty and commitment to international law and regulations in diplomatic affairs. In any case, the “ambassadors crisis” was one of the highlights of Turkish foreign policy in 2021 and generated a new trust gap between Turkey and some leading Western countries.

It seems that the Biden administration does not want another escalation with Ankara in the coming months. Washington tried to avoid any further conflict with Ankara while maintaining its support of the YPG, the PKK terrorist group’s Syrian affiliate. Washington still maintains the Countering America’s Adversaries Through Sanctions Act (CAATSA) sanctions against Ankara to prevent further cooperation between Ankara and Moscow. U.S. authorities also try to reduce their dependence on Ankara in critical security issues regarding the Middle East and North Africa (MENA) region and Black Sea security.

Washington’s continuing efforts to increase its military presence and military investments in Greece are gradually taking place. Greek politicians and authorities try to use the recent military agreements between Athens and Washington and the U.S. military installments in Greece to balance Turkey. Leaders and experts in the U.S., on the other hand, explain boosting American military presence in Greece as a move to balance Russia. The reality seems to lie between these two explanations.

Greece is becoming a U.S. base and a host of American military infrastructure. Both Athens and Washington are instrumentalizing the existing tensions between Turkey and Greece to silence the Greek public about the increasing U.S. military presence in their country. The Greek public will eventually recognize that the tensions with Turkey in the Aegean Sea and Eastern Mediterranean were just superficial and unnecessary and a pretext to extend the U.S. military presence in their country. Such a move, together with an arms race, will make Athens more vulnerable to Washington and will limit their potential collaboration with Beijing and Moscow.

The expectations related to improving Turkish-EU relations are very low for the agenda of 2022. There seems to be a lack of motivation and political will in both Ankara and Brussels to boost the ties in the short term. This is mainly due to European actors’ unwillingness to engage further with Erdoğan and his government. The European actors will most likely invent new conditions on top of the existing ones to move relations with Turkey forward. Generating new conditions and producing new diplomatic obstacles are the most common strategies and tactics when the European actors do not want to take new action. The crisis in Ukraine and potential escalations in Afghanistan, Libya and Syria may bring Brussels closer to Ankara.

European actors are held hostage by their prejudices and fears about Turkey. The relations between Ankara and Brussels will change dramatically in a positive direction when both sides focus on joint interests and opportunities rather than on the existing fears and biases. Any improvement in customs union modernization and increased high-level contacts will generate a new stimulus for Turkish-EU relations. There is also significant potential for further cooperation in manufacturing, trade, energy and security. Those will be the areas we should focus on more clearly for 2022. Turkey will try to improve its relations with many European countries on bilateral terms. These efforts may provide new stimulus for Brussels to engage with Turkey more seriously.

What awaits foreign policy in the new year?
Next
Loading...
Loading...
We use cookies to ensure that we give you the best experience on our website. If you continue to use this site we will assume that you are happy with it.Ok