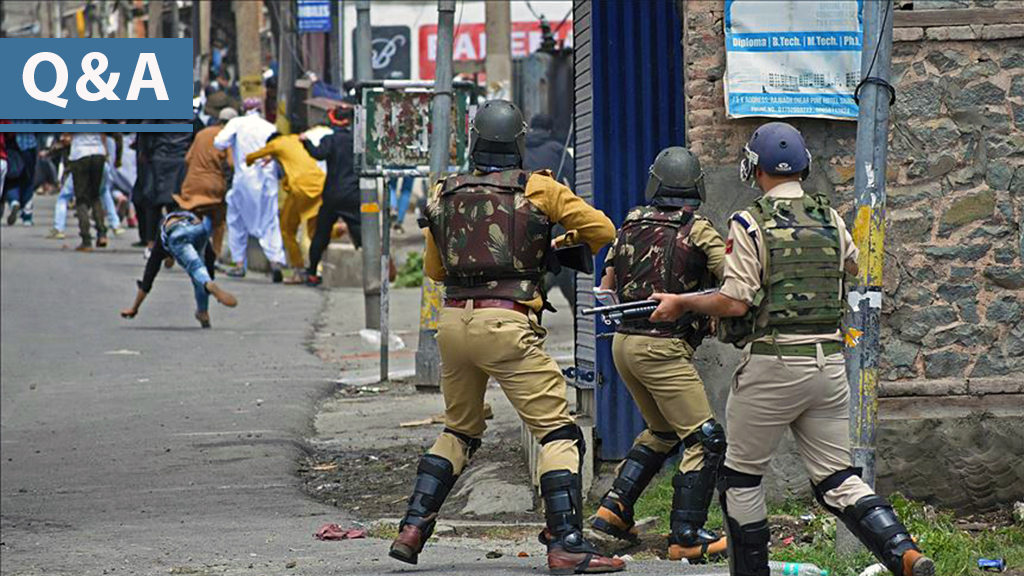 5 Questions: 2019 Escalation of the Kashmir Conflict

The year 2019 has been a watershed moment in the history of Kashmir. It started with the Pulwama attack of February 14, where a suicide car bomber named Aadil Dar killed 40 Indian paramilitary CRPF (Central Reserve Police Force) and left many wounded. Indian media reports claimed that Pakistan-based Jaish-e-Muhammad claimed responsibility for the attack, and released a video in which Aadil Dar says, “By the time this video reaches you, I will be in heaven.” The attack not only brought the neighbors (India and Pakistan) to the brink of war, but made life a little more difficult for the people of Kashmir. The government of India imposed a blanket ban on movement of civilian traffic on the Highway which is used to ferry Indian forces to Kashmir. This highway happens to be the only major route connecting parts of the Kashmir valley with Jammu part and Indian state. As a result, the Kashmiris’ freedom of movement became extremely restricted.

On August 05, 2019, India re-annexed Kashmir by scrapping so-called special status under Article 370 and 35A of Indian constitution. These 2 articles of Indian constitution granted Jammu and Kashmir region under India a certain amount of autonomy including its own constitution, a separate flag, and authority to make laws. The people of Jammu and Kashmir could make their own laws relating to permanent residency, ownership of property, and fundamental rights. These laws also barred non-Kashmiri Indians from outside the province from purchasing property or settling there. Although since 1953, India had slowly and steadily weakened the nature of autonomy granted under these two articles.

After the abrogation of Article 370 and 35A, the disputed Jammu and Kashmir region was bifurcated into two centrally-administered Union Territories (UTs) viz UT of Jammu and Kashmir and UT of Ladakh. India shares borders with China in Ladakh. And the step is being seen as India’s move to settle border disputed with Beijing.

After bifurcation, the disputed region came directly under the so-called federal (central) government of India. From law and order to budgeting the central government will have the final say. Any law passed by Parliament of India will be directly implemented in the disputed region after August 5. Earlier, such laws had to get concurrence of the local legislative assembly.

In other words, the center, namely India, will directly govern the territory of Jammu and Kashmir. On the night of August 4, although strict curfew was imposed under section 144 was officially imposed. Section 144 of the Criminal Procedure of the Indian Penal Code of 1973 authorizes the executive magistrate of any state (province) or territory to issue an order to prohibit the assembly of four or more people in an area. According to the law, every member of such an unlawful assembly can be booked for engaging in rioting. Meanwhile this sudden move created a lot of uncertainty; people could imagine of war. There was severe lockdown imposed by India by rushing nearly 200, 000 more troops to Kashmir boosting her troops-level to nearly 1 million – Kashmir is world’s most militarized zone anywhere in the world.

There was literal humanitarian crisis as no one was allowed to move.

During the mini-protests against this move by the Indian government, people celebrated Pakistan and Turkey – the only two countries which came out in full support of Kashmir.

Article 370 was the basis of Jammu and Kashmir’s so-called accession to the dominion union of India; , it allowed the region to establish its own constitution. Article 35A was forbiding the outsiders, say Indian citizens, from permanently settling in the disputed region, by prohibiting them from buying the land there.

Although people in Kashmir have rejected article 370 since no consent was taken from them when Indian invaded Kashmir in October 1947, however, India though compradors, the pro-India Kashmiri politicians, ruled Kashmir through this plank.

Sensitive of any possible demographic changes, Article 35A disallowed Indians to become residents of the disputed region. It, somehow, stopped any change in characteristics of the region. However, through many laws, Indians were able to establish their offices and companies in Kashmir on lease basis which would extend for at least 90 years. Besides, India has deployed 1 million Indian troops in Kashmir most of whom carry along their families. These two articles provided autonomous status to Jammu and Kashmir. India could only govern the state in three areas, namely defense, communications, and foreign policy, and all laws would be made and amended by the government of India in Kashmir.

Following the abrogation of Articles 35A and 370, the Indian state imposed a complete information blackout in Kashmir Valley and other parts by suspending landline, mobile, and internet services. Curfew restrictions were also imposed across the region, and politicians of all hues were jailed including the two former Chief Ministers of Jammu and Kashmir Omar Abdullah and Mehbooba Mufti. Omar Abdullah is from the National Conference Party and Mehboobi Mufti is a member of the People’s Democratic Party. Both the parties and their members worked as local collabotors of Indian occupation in Kashmir. There were night raids in the rural belts by the Indian army where an atmosphere of absolute fear was created to keep people from coming out to protest. Reports suggest more than 13000 young boys were arrested. Despite the curbs, protests against the Indian government erupted in certain parts of the Kashmir Valley.

Kashmir’s resistance leadership, who seek complete freedom from Indian occupation, have been behind bars for years now.

For the Indian public and politicians, the abrogation of Articles 35A and 370 led to “complete integration of Kashmir” with India. Yet, on the ground, the abrogation triggered more dissent from Kashmiri people against the Indian rule.

The Indian move has yet again brought Kashmir on international agenda like never before and has unmasked the image of India in terms of claiming to be the world’s largest democracy.

Moscow gathering: The end of violence?
Next
Loading...
Loading...
We use cookies to ensure that we give you the best experience on our website. If you continue to use this site we will assume that you are happy with it.Ok