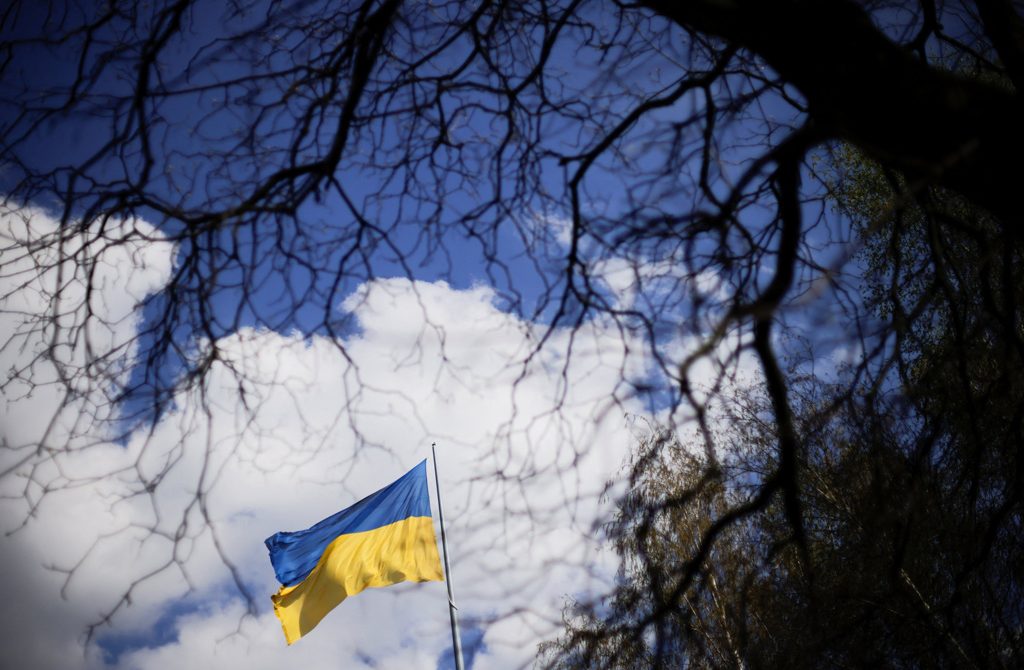 A Ukrainian flag is hoisted at a square, amid Russia's invasion of Ukraine, in the town of Kryvyi Rih, Dnipropetrovsk region, Ukraine, April 25, 2022. (Reuters Photo)

Who will give up in stage two of the Russia-Ukraine war?

U.S. Secretary of State Antony Blinken declared Russia has failed in Ukraine, but it's still too early make such a precise statement

The second stage of the Russia-Ukraine war rages on, as Mariupol, Ukraine’s 10th-largest city, remains on the brink of falling. Having blocked the evacuation of the besieged Ukrainian forces until now, Russia probably wants to demonstrate the skills of its fighters to the entire world. As the Kremlin carries out its operation to link Donbass with Crimea, there are signs that it could extend that line to Odessa and possibly Transnistria, Moldova. If the Russian forces accomplish that mission, they will have cut off Ukraine from the Black Sea and “protected” the Russian minority in Moldova. That would fundamentally alter the geopolitics of the Black Sea. Meanwhile, Russian President Vladimir Putin does not seem to care about economic sanctions, retaliating against some and looking for ways to circumvent others. Provided that many nations, including China and India, have not joined Western sanctions on his country, he appears to think that energy exports could be enough to repair the current damage.

Whereas U.S. Secretary of State Antony Blinken visited the capital Kyiv to declare that Russia was “failing” in Ukraine, hardly anyone expects Russian President Vladimir Putin to give up. Having failed to conquer the Ukrainian capital and topple Ukrainian President Volodymyr Zelenskyy’s government, the Russian president has focused on the operation’s second stage. It would be wrong to say that the Russian public opinion views the end of Kyiv’s siege as a problem. Indeed, Putin could easily portray the Russian control over Ukraine’s eastern and southern provinces as an “accomplishment.”

By preventing the fall of Kyiv, however, the Ukrainians have showcased their combat capabilities. As such, the Western nations, starting with the United States and the United Kingdom, should be expected to deliver the “offensive” weapons that Kyiv has been requesting for some time. That development, in turn, could turn the clashes along the Donbass-Crimea-Odessa line into a prolonged war. Still, it is possible to predict that Moscow won’t stop until it gains control over that line.

Several questions come to mind regarding this second stage of the war in Ukraine: To which side would a scaled-down yet prolonged war inflict more damage? Who is ready for that scenario and who stands to benefit from prolonged fighting? Could such a conflict end Russia’s great power status?

There is no doubt that Ukraine has suffered the greatest damage and it stands to suffer more if the war continues. Yet the Ukrainians won’t stop now either. Instead, they will try to take back their cities, now under Russian control, with heavy weapons. The prolonged war will have a negative impact on Europe, too. Facing Russia has weakened the continent’s hand in great power competition. Indeed, German Chancellor Olaf Scholz finds it difficult to manage the impact of Germany’s dependence on Russian energy on his country’s economy. Meanwhile, it remains unclear how the German government will allocate its additional defense budget of 100 billion euros ($106.7 billion). For example, the Greens demand that part of that money goes to renewable energy.

It would not be surprising for French President Emmanuel Macron, who clinched reelection on Sunday, to make an attempt to unite Europe and explore a diplomatic solution with Putin. After all, a prolonged, scaled-down war between Russia and Ukraine threatens to hurt Europe’s interests. At the same time, however, the conflict is wearing down Moscow and has consolidated NATO, apparently encouraging Finland and Sweden to join the alliance. To keep Europe from experiencing economic and political problems in the medium and long terms, however, that war needs to be ended soon.

President Recep Tayyip Erdoğan’s commitment to the Istanbul process and facilitating a meeting between Putin and Zelenskyy serves European interests as well. Indeed, diplomatic efforts must continue, regardless of the “stage” and intensity of the war. Whereas Russia’s many military weaknesses have been exposed already, there is no reason to believe at this time that Russian forces could be forced to retreat from Ukraine’s eastern and southern provinces.

Everyone knows perfectly well that war is also about propaganda and morale. That is why Blinken’s remarks in Kyiv could be considered understandable. It is way too early, however, to declare that the Russians have “failed.”

Analysis: Libya | A tale of two prime ministers
Next
Loading...
Loading...
We use cookies to ensure that we give you the best experience on our website. If you continue to use this site we will assume that you are happy with it.Ok