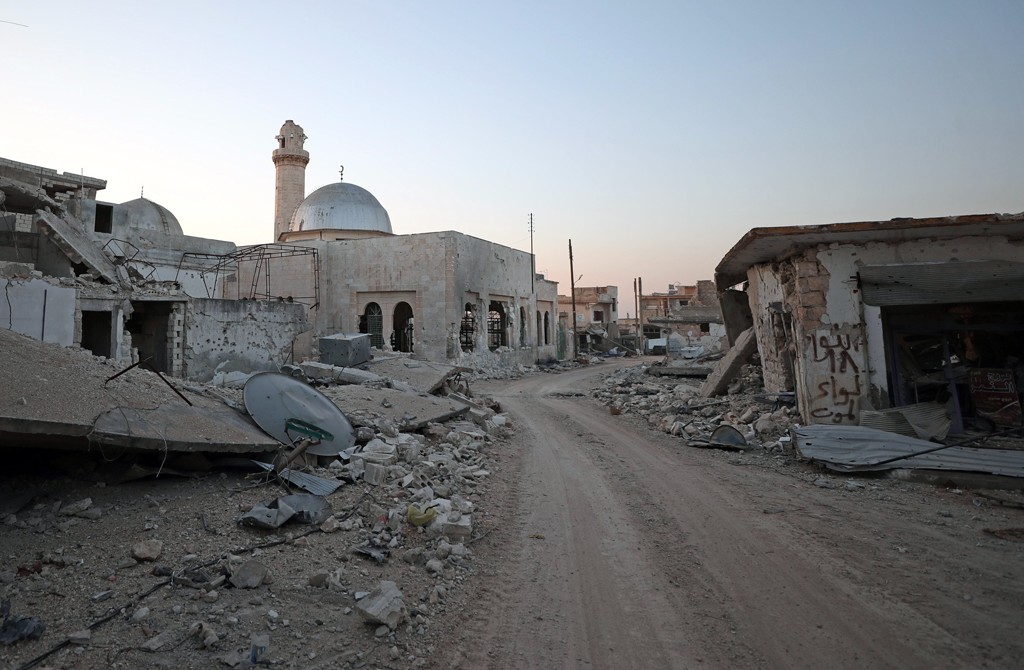 A picture taken on March 7, 2020, shows destruction in the village of al-Nayrab, about 14 kilometers (8.7 miles) southeast of the city of Idlib in northwestern Syria. (AFP Photo)

What to do now in Idlib?

Last week’s agreement between Turkey and Russia established a new deconfliction plan and demonstrated that the two countries were united in their commitment to the Astana and Sochi processes. Even more important was their ability to stop the clashes in Idlib and preserve the framework of their bilateral relations.

Last week’s agreement between Turkey and Russia established a new deconfliction plan and demonstrated that the two countries were united in their commitment to the Astana and Sochi processes. Even more important was their ability to stop the clashes in Idlib and preserve the framework of their bilateral relations.

It appears that Turkish President Recep Tayyip Erdoğan and his Russian counterpart, Vladimir Putin, engaged in a comprehensive discussion, including, but not limited to, the situation in Idlib and Libya.

Erdoğan, notably, told reporters that Putin promised to take some measures regarding the Wagner Group’s operations in Libya – which supports my conclusion that the leaders did not limit their conversation to Idlib. In the end, Erdoğan and Putin denied third parties an opportunity to derail the Turkey-Russia relations.

Nonetheless, much more needs to be done to facilitate a political transition in Syria. Turkey’s fight against the Bashar Assad regime in northern Syria is not yet over since Damascus demands a Turkish retreat from Idlib and the three Turkish-enforced safe zones. The regime could violate the cease-fire as soon as a new opportunity presents itself. Assad’s decision to deploy pro-regime militias to Libya, where they will fight alongside Libyan coup plotter Gen. Khalifa Haftar, attests to his anti-Turkey stance.

The “sustainability” of the cease-fire in Idlib requires a new “process.” The March 5 agreement may have stopped the fighting, but it is impossible to ignore the situation on the ground. There is a need to analyze alternative scenarios to prepare for potential cease-fire violations. Although Turkey is dealing with a range of domestic and foreign policy issues, it must not deprioritize the Idlib file. Failure to keep paying attention could turn Idlib into a very serious problem with the potential to endanger Turkey’s cooperation with Russia.

So, what is to be done? Let’s start with a list of facts: The current situation is very different from the 2018 Sochi agreement. There have been serious military confrontations between Turkey and the Assad regime. For the first time since the Syrian civil war began, the Turkish government conducted a military operation that seriously undermined the regime’s military capabilities. As part of the agreement, which was designed to de-escalate those tensions, Turkey and Russia took additional measures to keep the cease-fire in place. The Turkish military will play a more active and official role in Idlib through a security corridor and joint patrol missions along the M4 highway. The crisis, however, hasn’t been resolved completely. Violence could erupt at any moment, as Assad keeps looking for an opportunity to strike.

In light of the most recent developments, Turkey needs to increase, not reduce, its military footprint in Idlib. This is to say that Operation Spring Shield must continue, with an updated mission to protect civilians and oversee the transformation of radical groups. The Turkish government must prepare for a potential violation of the latest cease-fire and lay the groundwork for the establishment of a safe zone in western and northern Idlib. The next time Assad violates the cease-fire, Turkey will be forced to choose one of two bad options – leaving Idlib, which would endanger its remaining safe zones in northern Syria, and engaging in a more comprehensive military confrontation. To avoid such a choice, it must take military precautions without delay.

The Idlib cease-fire is crucial for Syrian refugees and the future of Turkey’s safe zones. We have witnessed how an escalation in Idlib can disrupt the Turkish-Russian relationship. Last week’s agreement prevented a serious rupture in bilateral relations, thanks largely Erdoğan’s constructive steps. The Assad regime was thus compelled to respect the cease-fire.

All parties must make a serious effort to fully implement the cease-fire agreement in order to prevent a similar escalation in the future. Turkey must deliver a strong diplomatic and military response to the regime’s next violation. In other words, the military observation posts, which have been defended passively under the 2018 Sochi agreement, must operate under the rule of active defense. At the same time, Turkey must maintain dialogue with Western governments, in case a fresh crisis breaks out in the future. It needs to redouble its efforts to improve the living conditions of internally displaced persons in Syria and conduct diplomacy for the sake of their future.

Cease-fire on for 4th time in Idlib; what’s next?
Previous

Europe, US unable to grasp Syrian refugee crisis in Turkey
Next
Loading...
Loading...
We use cookies to ensure that we give you the best experience on our website. If you continue to use this site we will assume that you are happy with it.Ok